The City of Talos 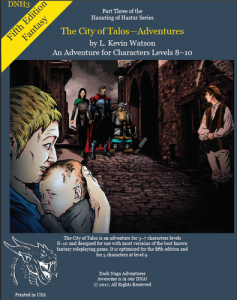 Talos, a city of legend, focus of tales dating back to the First Age of Man—exotic and forbidden. Buried deep in the Formene, this lone gem of the subterranean realms has legends as tall as the mountains under which it lies. Scholars and sages know more: it is the capital of the Elven race of the subterranean realms, sealed off from the surface world, supported by smaller towns, trading nexuses, and the wealth of knowledge accumulated by the Formene Elves who ward it.

This 37 page adventure collection contains thirteen adventures, eas about two pages long, supplemented by a separate 33 page booklet describing a lost city of elves. It is, at best, an adventure outline and at worst incoherent in many places. Badly bolded, wall of text, generic locations and almost NO context for the adventures.

It’s really hard to describe just how disconnected these adventures are. U guess, in some way, they all relate in some manner to the city of elves. An alternate way to gain entrance, go on missions for them … but then also some REALLY tangential ones. Things like “the party may encounter some of these magic gems and follow up on where to mine them.” Furhter, the actual connection to the city, or maybe the context of the adventures, is almost non-existent.

The first adventure is representatives. Two pages. The first column is a detailed wall of text on meeting an elf and getting assigned the mission. Approached by a halfling. DIrections to a grove. Given a bird call. Details on the journey like “The two-hour walk is uneventful. The characters find the grove with little difficulty.” are rife, along with all the ways the elf will just leave the grove without contacting the party. (I guess that means the rest of the book is useless, since they now cant get entrance to the city the book is arranged around?)

The backgrounds are full of this of micro-level detail, but there’s almost no context. The halfing says an elf wants to meet you. The elf says his wants wants to use the party to arrange contact with the greater world. Why the party gives a shit, the mythic nature of the city, the rewards … all of that is missing. It’s like there’s a paragraph or two missing.

Then the DM text starts in. In contrast to the micr-detail of the background the locations are abstracted to a large degree. Here’s one: “6, 7—Purification Rooms—Up the stairs from the Outer Chapel, these rooms are lit by ever-burning braziers like Area 5 and contain two large, dormant, incense burners near the door on the far end of the room. These rooms might have been used to inhale heady incense before proceeding deeper into the temple.”

Two rooms with one description (the dreaded “reflected layout” for a temple!) and not evocative at all. It’s not that I want a paragraph, but the contract to the detail of the background is stark. Then, the location numbers are bolded and so are the words “For the GM.” Well, it’s all fo rhe GM, since it’s not read-aloud, and bolding of those words, in addition to the location numbers, makes picking out text hard.

There’s just nothing to this. The adventures are generic, with overly detailed introductions and overly-abstracted content.. The context is non-existent and the formatting difficult to follow.It’s almost a Books of Lairs set up, but without even that much coherence.

This is $13 at DriveThru. The third page of the preview starts the first adventure. It’s a great representation of the content you get. Note the left hand column and the detail and then the location descriptions on the right hand side. Weird as all hell.https://www.drivethrurpg.com/product/214860/DNH3–The-City-of-Talos-Complete-Edition?affiliate_id=1892600