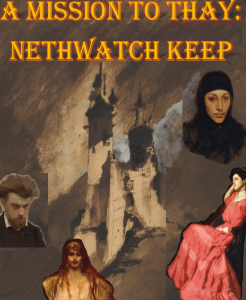 Here is the Episode 8 that Rise of Tiamat should have contained! Thay in all it’s horrid and far-reaching power and might. A society dark, alien, at odds with itself, and at the boiling point of explosion.

This 130 page adventure (in five parts, with part five being an appendix) offers an alternative to chapter 8 of Hoard of the Dragon Queen/Rise of Tiamat, but could also stand alone. While the original chapter 8 was just some general throw away content, this is specific, evocative, and, more than ANY product I can recall, revels in flavor of Forgotten Realms. Look, I’m not an expert in FR, but I do know every adventure I’ve seen is generic and lacks flavor. All of the designers seem to think that stupid 50 character-long names are what “flavor” is. That’s not flavor. THIS adventure is flavor. It brings home the evil of Thay, and will no doubt focus the PLAYERS angers, without going off the deep end in to being puerile or vile, at least according to my midwestern tastes. It’s got some issues with being … long? Whatever, while it does a decent job with organizen & reference sheets it’s also going to take some work to prep. It’s ALMOST worth it to me … and since I have high standards … maybe it’s worth it to you.

There’s some pretext to make this fit in to Hoard/Rise. You go to Thay to see what the contact has to say about the Cult. It’s pretty generic in Hoard/Rise. Not so here. There’s one little slave boy in a keep of undead (intelligent & not) who complains of a monster under his bed. Gladiator games are held, with the winners taken to be euthanized and turned in to an undead army. There are zombie infant submission baskets hanging from the ceiling. The “slaves as chattel for necromancers” is just on the edge on being uncomfortable. It’s enough to make the PLAYERS hate Thay, but not so much to generally evoke real-world darkness too hard. At one point you have a dinner with a dragonborn tribe which plays out a little like the Riker dinner with the Klingons. This place FEELS different. It’s not a hand wave. In one of the official adventure, Into the Abyss maybe, the drow guards had “sleeping pallets.” I bitched that it was lame and didn’t conjure an alien culture. Not so here! This place is alive, both with “evil culture”, “evil necromancer culture” and “nonhuman tibres culture.” That’s REALLY good.

There’s a “best way” through the adventure, but it’s not exactly linear. The designer outlines alternatives and flowcharts out the adventure so you can help understand how the locations work together. There’s an explicit section at the end of each to show you what could come next, both from the hints in the location and in things characters might do like “what if they lead a slave rebellion?” and stuff like that. That’s good for these mutliepart things. Both where the adventure naturally leads and how to handle the players choosing other options. I was struck by the hook here also. The inciting event is the kidnapping of a wizard you need to talk to. I was fully expecting a railroad and the wizard to get kidnapped no matter what. I guess that’s ok, I’ve come to accept that the hook is allowed a little more of a railroad. But, NO! In this adventure can you save the victim and there are still ways the adventure can go forward! A delightful surprise!
The NPC”s are well done. They get little offset boxes with a few words describing their physical/personality attributes. Short, evocative, and focused on helping the DM run them. That section is followed by a few bullet points that describe their goals. “Get more Druge. Find some kids to kidnap.” and so on. It’s an effective way to communicate an NPC to the DM effectively.

There are a decent number of non-standard magic items also, which I love. A book that can copy pages if left on top of another over night. A pair of balls that will gently “tug” towards the location of the other one. Not just boring old mechanical attributes but DESCRIPTIONS of effects. Perfect.

The maps are also quite interesting, at least a few for the major locations. They show a scene and can be used as a battle map, but then there’s a second, for the DM, with notations all over it. They describe what’s on the map, almost like a one page dungeon. It’s a great example of leveraging the map for communicating additional information to the DM beyond “key number.”

They are also great reference sheets for rumors (divided by the type of person, like slave or wizard) and for some of the more complicated spell-casters. Good choices.

But …. It’s also got some pretty serious issues.

First, it needs a better summary. There is some long text, that I might say is background, but a small section laying out how the entire thing works together would have been VERY helpful. There are a few sections that try to do something like this but they are all either WAY too specific (the backgrounds) or very general (the flowcharts.) There needs to be something in the middle. AT one point there’s a village where people are sometimes VERY clearly compelled to say things (I love that telegraphed stuff) but you could EASILY miss the reason why. That’s the sort of thing for a general summary. The “one page outline” does a decent job but is missing some important things and still doesn’t feel like an “overview.”

More importantly, I find the text … conversational. The What’s Next and NPC sections are GREAT, as are the reference sheets, notations for rumors, etc. But the adventure falls down over the core text. One of the first sections is when the party teleports to Thay and are greeted by their hostess. There are three paragraphs of text, longish even, taking up a column, that describes the scene. How they are greeted, by who, what they do, etc. The paragraph format, or maybe the “long text paragraph” format doesn’t really work here. Scenes run in to other scenes or other text descriptions without much delineation. More whitespace, bolding, bullets, etc would help A LOT. It’s this, far and away, which drags the adventure down from the lofty heights it achieves in other areas.

Like I said, it’s VERY flavorful, and probably the best FR thing I’ve seen. I love the NPC’s and it would work as both a standalone and as a replacement for chapter 8. But you’re going to need time to prep it and a highlighter. It’s VERY hard for me to recommend it based on that. Better summaries and a reworking of the DM text/scenes would make this magnificent.

This is $5 at dmsguild.
http://www.dmsguild.com/product/234490/A-Mission-to-Thay–Nethwatch-Keep