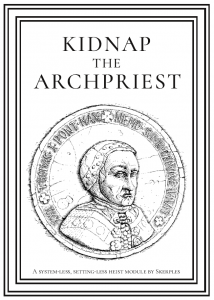 The Archpriest, leader of the Church, has defied a summons to the Immortal Capital. You have been chosen to retrieve the recalcitrant pontiff.

This 54 page adventure has the party coming up with a plan to … kidnap the archpriest from his holy chapel. It’s all based around NPC’s, devising a plan, diplomacy, sneaking, bribery … all of the things that make up a great social adventure in a city. (And, fair warning, I LUV city adventures.) Good timeline reference materials compliment great NPC descriptions and useful advice to support the DM in a sandbox manner. A little intimidating in length, it supports the DM well.

That teaser is short & to the point, isn’t it? Almost the entirety of this adventure could be described as short and to the point, in spite of its fifty or so pages. Most location, except for the main castle, get about one small paragraph of descriptions. The streets are narrow, maze-like and crowded. Perfect! Just enough to communicate the flavor … and then that’s supported by a random encounter table for day & evening. Likewise the river, and other important locations/sites the party will need. Do you need to know the price of a bowl of stew in order to kidnap the archpriest? If so then it’s in here (it’s not.) It focuses like a laser on supporting the main mission of the adventure. And as it does so it manages to communicate more flavor in each little section than was in the total of a mainstream product like Hoard/Rise.

The prologue serves as the hook. Here’s what the guy tells you: “His Dread Majesty Gulfrey II, ruler of the Immortal Capital, heir to the Immortal Empire, is troubled. The Archpriest, His Holiness Thomas I, has recently defied a summons to the Capital. While the dignity of the Archpriest, and his authority in spiritual matters, is not in doubt, His Dread Majesty has some… questions. Doubts, even, regarding the Archpriest’s recent publications.” And then it ends with “You can handle this discreetly, can’t you?

Good.”
Great flavor, and reminds me a lot of the city administrator in Going Postal.

The NPC’s are well done also. A small little section for each, noting appearance, voice, wants, morality, intelligence and stats. Only the important stuff to help the DM run them and none of the trivia found with most NPC descriptions. Exactly what you need to run them and make them memorable.

Want more? There’s great advice. Getting the characters involved. How to orient the adventure for higher magic environments. GREAT advice in playing fair as the DM: there should not be surprises; the players should be able to figure things out. How to communicate tension and violence for the palace guard. There’s a page or so that covers advice for common things, like climbing the walls, bribing the guards, stuff the archpriest in a barrel for a trip down the river, and so on. The designer anticipates what the DM needs and provides it.

Almost everything is oriented toward the scenario at hand. The rumors, locations to be described, the river and street encounters, even the room descriptions of the castle. What can I steal, where can I hide, is the door locked, whos in the room and when, what are the vices of the NPC’s to be exploited … what you need to run an infiltration and social adventure.

The rumor table is cross-referenced. There’s a timeline breakout for each major area noting where NPC’s are and what major events are going on. There’s a sideview of the castle showing windows and noting locations. The treasure is great and oriented toward the environment. Who wants a blank letter of excommunication! Or red gloves, impervious to all damage?

Lookin at just one place, an inn. We get the owner, his wife (who wants sex & excitement, sort of) and is creating on her husaband with a chandler and sneaks in her window every night. He’s a little dumb and looks JUST like Cardinal Delver … and delivers candles each day to the castle … In this one little section, with three brief NPC descriptions, you have leverage over the innkeeper, his wife and her lover and can now blackmail to encourage them in to plots. You can use the chandler to impersonate the cardinal, or to get in to the castle, or blackmail the cardinal. It’s ters and full of multiple possibilities all oriented to the task at hand. And that’s what you want.

This is $5 on DriveThru. The preview is seven pages. How Can I Help, on page 3, gives you a good idea of the advice and tone of the adventure. The next page of the preview is the prologue, dripping with cold-hearted flavor, with the next page giving an example of the NPC format (although its three of the more boring/remote ones)
https://www.drivethrurpg.com/product/233069/Kidnap-the-Archpriest?affiliate_id=1892600

10 Responses to Kidnap the Archpriest