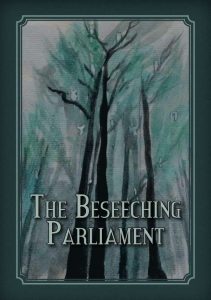 A mansion in disrepair.
A family in shambles.
A thousand dark shapes against aurora-laden skies.

This forty page adventure location describes a family, their small manor, and the region around it, along with ‘a situation’ to drive the action. This fits the old definition of module, as the description of a little self-contained place. In to the locale the players come, to do what they will. It’s got a good core idea, but could use a rethink in order to focus itself on those core ideas rather than trivia.

It’s just a place, described. A small manor, the grounds, the woods and a nearby lake and island, along with the NPC’s. In to this description we add a little history in the form of the Sins of the Past. The owl king, a fae, lives on the island and makes a pact with each member of the family. In exchange for their souls. Which one of them doesn’t want to give now that it has come due. I love the classics and it’s gonna be hard to argue that Faust isn’t a classic. In to this situation we add the party, either working for the owl king (in exchange for … temptation. A level? 6 attribute points? Come on, just a taste …) or perhaps working for themselves, trying to steal a fabulous jewel the manor lord has. Thus the adventure revolves around the PC’s goals and the NPC’s goals with the location serving as the backdrop. That can be good.

Can be. First, the adventure does a pretty decent job in recognizing the NPC’s drive the action and in providing the DM the tools they need to help run the adventure. Little pretext scenes to get the party interacting. A little system for earning (or losing) the lords trust. A nice little section describing what the dead people and animals know, this being D&D after all. And a final touch in describing what they get if the party loot the entire manor, down the roof tiles. Nice touch that. 🙂

The adventure recognizes that the locations are secondary to the NPC’s, but then still spends a decent amount of time on each of them. I didn’t find the descriptions very evocative (maybe there’s a translation issue? This might be Finnish) and the room/location descriptions ran a little long. Not with the usual “exhaustive description of everything” that many adventure s engage in, but rather a general description that’s bland. “Clean but somewhat dusty” and things like that. Not really telling us much at all.

I also found the NPC descriptions a little weak, from the lord to the fae to the animals. Again, a little long, I would have preferred to see a strong personality or trait in the first sentence, to give the DM a feel for the NPC right off the bat. A strong element to hang your hat on and work with. Instead they long and meander a bit.

The same with the DM text descriptions. At one point, buried in a paragraph, it notes strange symbols on the doors and windows. That’s the sort of thing to call attention to with bolding, etc. Make these details stand out, wither with bolding, etc or by putting them first.

I was also thrown, a bit, by the challenges. There’s a 13HD bird monster flying around. And crossing the lake subjects you to 1d10 cold damage (or maybe 1d4 if you protect yourself.) That seems a little excessive for a level 1-3 investigate adventure.

Not a terrible effort, but more focus on the NPC’s and less on the locations. Pruning back the word count a lot, would have helped this one a lot.

This is Pay What You Want at DriveThru, with a suggested price of $5. The preview is ten pages. The last two pages are the only ones worth anything, showing you some of the pretext scenes and the animal/dead NPC’shttps://www.drivethrurpg.com/product/234290/The-Beseeching-Parliament?affiliate_id=1892600

4 Responses to The Beseeching Parliment

Leave a Reply to A. L. Cancel reply