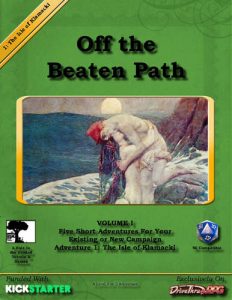 They have all been convicted of various crimes. Let your players come up with what they were rightly or wrongly convicted of. They are told they must keep a lighthouse lit for the next five years upon the island as their punishment. A supply ship will come every six months to bring them provisions for the lighthouse. They are told to stay within the walls guarding the lighthouse and not to venture onto the island for great evil awaits them there.

This seventeen page adventure has the characters stuck on an island. Two individuals offer them an escape, if they kill the other person. It’s quite long for what it is, offering really just two encounter areas. It’s a good idea, easy to read and run, but needs to be fleshed out more.; it seems too small/lite.

I reviewed a different adventure in this series and wasn’t very impressed. The folks there suggested I look at this one, one of their favorites. I can see why. It’s quite different in tone and organization from that earlier offerings. The background is short, only about two paragraphs, and describes lovers cursed, and that one must die to break the curse. Nice classic set up. As the intro implies, the party starts on the island. Being PC’s they will no doubt explore where told not to, and this encounter one or both of the NPC’s and be offered an opportunity to escape if only they would kill the other, freeing the NPC from the curse. A melancholy affair, I salute the adventure for getting in and out fast with background and the classic trope.

The unique magic items are ok, with unique effects but somewhat generic descriptions. A line of “WoW” would go a long way there. It adventure also does a decent job of making Question & Answer time easier for the DM. For each of the three main NPC’s (two accursed lovers and a lighthouse keeper) we get a small section description questions the party might ask and their response. It’s easy to pick things out, even though it is in “read aloud” format. The read-aloud doesn’t really add anything, and therefore it could have been in “DM text” format, saving considerably on space.

It also provides some guidance with common PC activities. Want to build a weapon? Or hunt? The adventure provides some short guidelines, as well as one or two obvious gimme’s for PC’s, like “A dwarf will recognize the stonework as elven.” THis is good adventure design: anticipating the most frequent issues the DM will have to face and addressing it.

It’s short, with only two real encounters: each of the former lovers. You may visit each multiple times, but it’s just those two. Other than the length and weakness of writing (which I’ll get to shortly) this is the primary issue with the adventure. It’s more of a side trek, in Dungeon Magazine terms. In fact, I’d say it could EASILY be a one-page dungeon and loose very little.

There ARE some long read-alouds. Again, you get three sentences, at most. More than that and people stop paying attention. Don’t believe me? Go find the WOTC article on the subject. It’s linked in my “Review Standards” page.

I would note also that he writing addresses the characters directly, which is never a good idea. This is done, generally, to build tension and communicate flavor and I think it’s a TERRIBLE way to accomplish that. “In your weakened condition …” or “You make your way to the center of the bottom level …” Nope. Do not. I hug the wall, like I always do, awaiting DM treachery. These attempts at first person writing don’t get the party in the mood, they do the opposite in yanking them out of it.

The read-aloud is also abstracted. “The lighthouse looks old.” That’s a conclusion, it’s abstracted from something. Better to write and describe the lighthouse in such a way that the listener/reader comes the conclusion it’s old. AGain, I’m not looking a novel here, just a short replacement sentence that communicates the vibe that the lighthouse is old, for example.

There’s a moral issue in this adventure, and those are always hard in D&D. It’s supposed to be a fun game; there are indie games available for exploring your childhood traumas. Two accursed lovers. Both want you to kill the other. Both offer you an escape from the island if you help them. No one really evil. That makes the choice hard. A little more in the “Chris was obviously evil, at least at one time” category, or a clear third option (there is one of those, but it’s not exactly clear to the party, I think) could help the designer out of that bind.

I wouldn’t say this is a good adventure, it’s a tad short and the writing a bit long. But it’s not exactly a bad adventure either. Given my recent 5e reviews that alone is a compliment. A one-page version of this would be a nice thing to experiment with. The vibe reminds me a bit of the Metagorgos adventure I reviewed … in the last year? I don’t feel ripped off, and while I think the themes interesting, there’s not enough to capture go forward with running it, I think. But … I’m also interested enough in the publisher to check out some of their other offerings.

This is $1 at DriveThru. The preview is only two pages, with the second page showing you that short little background at the end of it. A third page, showing an encounter, would have been helpful from a “make a purchasing decision” standpoint.https://www.drivethrurpg.com/product/225869/Off-the-Beaten-Path-Vol-I-The-Isle-of-Klamacki?affiliate_id=1892600

11 Responses to The Isle of Klamacki