The Maze of Screaming Silence 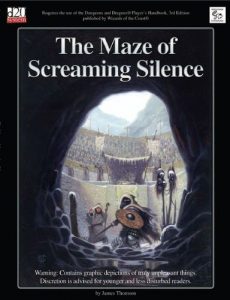 For a thousand years, Yagga-Kong have offered a fabulous reward to anyone who can find their way through the maze. Every generation or so, someone lives to claim it. Will you be the first this century? Then come to the Last Redoubt, where the mountains scrape the dome of the sky and the air makes men bleed from their ears. Come walk the twisted streets of the City of the Damned and brave the depths of the Maze of Screaming Silence.

This is an older, out of print adventure and doesn’t seem available digitally. I don’t normally review out of print products, or older for that matter. It somehow made it on to my list and I stumbled across a copy at Half Price. This isn’t going to be a regular occurrence, although I have promised Kent I would get to The Beholder, eventually.

This one hundred page(!) adventure describes an “evil” town with a few pages devoted to the pretext to going there: the titular maze. It oozes character, revealing in the environment it has created in the way few other products do. The core elements are excellent. It can be evocative in the way few other products can. It also probably has four to five times more text than it should. It wears that onion on its belt because it was the style at the time, but, even given those allowances, it’s hard to get past. It is fairly close to that platonic ideal I have of stumbling on to a classic adventure at the “dead rpg’s” booth at a con.

Evil Iggy, a warlord/raubritter, has a small outpost. Down beneath it is a little town/village that has grown up full of scum and dregs. Every day everyone gathers around the Maze to see who till try it. If you stay in, and survive, you get a bunch of cash. People bet, obviously.

This is a mostly a town adventure with extensive social components. I’m VERY fond of those elements. Town adventures are some of my favorites. Nothing gets the players going like the freewheeling nature of a good town. The Maze is mostly a pretext to get the players in to town and interacting with people. And, of course, to kick off the plotting and scheming that goes with something like “defeat the maze and win a prize.” The whole thing feels like a less mercantile Bartertown/Thunderdome thing. More scummy and knife you in the back than sell your camels.

I find the text, some of it anyway, some of the most evocative I’ve seen. It pulls at every fiber of your being as a DM. You WANT to run the encounters in this thing. At one point there’s a little paragraph that goes something like: “The Oracle presents a fearsome sight, blood pours out of her mouth, eyes and ears, her fingers are torn down to the bone, she laughs and screams “soon!” continuously as she lashes out at all and sundry.” She’s just turned in to a king of zombie, the “kill you and you become a zombie” kind. That kind of strong imagery, or maybe concept, is present over and over again in the adventure. Almost every single encounter/element has that something quite strong on which the DM can hang their work and work with. You WANT to run these and cackle gleefully to yourself on the joy you expect to have. Not the joy of punishing the players, or see their own difficulty, but in the joy of your mind racing with delights and possibilities. It’s a great example of really and truly communicating the vibe of an encounter to the DM. Creepy ways the locals interact with you. Guards that present pidgeon common in a wonderful way. Rumors presented in voice. “Last winter was bad. We had to eal all our dogs.” Yup, thats a bad winter! But anyway, “no there’s no dog fights in the pit … Someone times you can get a pit fight gong between two drunks, but it’s not like betting on dogs.” That’s a fucking rumor. (of the fighting pit and the guy that runs it. I removed that part)

It does a great job of giving advice to the DM via side boxes, and in the main text, aon adding atmosphere. How to communicate the flavor of the locals. Little things to cement the character of the town. It helps the DM communicate the flavor to the players. At one point there’s a ncie page section on various schemes the characters could engage in to acquire the ring the warlord wears. A pretext to drive the action to be sure, but it recognize that, once laid out, its up to the adventure to help the DM understand some of the more common responses and advice them on making them fun.

And the big bad the center of the maze? The beast that everyone fears? It’s a minotaur. Just a minotaur. Not one of those BloodWolf Tainted Exalted Minotaur King things. But it’s referred to as The Beast, not as a minotaur. It’s a great example of making a normal monster from the manual mythic without resorting to bullshit. Fuck yes a 6HD minotaur is a challenge to a party of 3’s and 4’s!

One more thing, at one point the local use their sly humor to get the party to stay in a cursed home. If/when the party survives they are then treated with a newfound respect and deference by the locals. That’s a great touch. Not enough adventures have the locals give the party their due. There are some real mechanical effects in addition to the roleplaying ones. It’s a great technique and one that should be used more.

It is also MIRED in too much text. The hook takes up the first 20 pages (that oracle that eventually goes zombie.) It also involved a dream (ug!) It has almost two pages of read-aloud. If you kill her and the loot the place BEFORE she goes zombie then there’s a little section of advice on how to punish the players by having their characters tortured and killed by the local lord. Being punitive to the players is never good. There’s also a writing style that almost is like a novelization of the adventure. It’s clear someone had a certain set of elements in mind and by god the players and their characters were going to follow that script. “If someone is disrespectful enough to pull back her hood then …”The usual culprits of irrelevant backstory and if/then writing combine with the “novelization” and ham-handed oracle/dream scenes to produce something truly atrocious, and quite out of place compared to the rest of the adventure. “Run this until the players get bored.” Indeed?

The writing is too long throughout the product. For every evocative couple of sentences we also get mountains of text that is not relevant or written a little too clever, irrelevant to the direct play of the characters.

It can also be generic at times. “Before your eyes, and before you can take any action, a man is stabbed to death by another man, who then runs right past your position. There are a few witnesses, but no one does anything about it.” That’s a weird style and uncharacteristic for most of the adventure.

But, still, quite good for the time period in which it was published (2002.) This is that most rare of things: a physical RPG product I’ll be keeping. I’m not sure it can be run well, it’s organized for shit and, like I said, you need a highlighter and a weekend taking notes to get it organized. But what’s inside, at its core, is a magnificent city adventure in hive of scum and villainy. Someone needs to update the writing, editing the fuck out of it and putting in a bit more of a summary for the DM, and publish it anew.

Alas, I can’t tag it The Best. It’s too unwieldy and I’m not selling my standards down the river because it’s a town adventure. But I can recommend that you pick it up if you see a copy.

Read more about it at:
https://rpggeek.com/rpgitem/61969/maze-screaming-silence

5 Responses to The Maze of Screaming Silence