(5e) Oath of the Frozen King 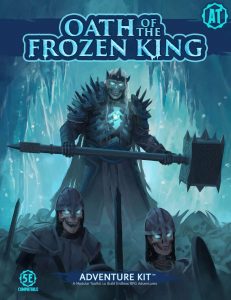 The only review says this is a ground-breaking product. Let’s find out!

Fuck me. It’s an adventure toolkit rather than an adventure. 62 pages. The front half is six locations, six encounters, six NPC’s, and a bunch of tables (include die drops). The idea is that you can kind of mix them all together to get create an adventure. Then the back half of the book has even more tables; a kind of inspiration for further adventures to creature. The “adventure” is actually pretty good, even though it’s going to take work to put it together. The back half inspiration tables are just inspiration tables. They are nice, but I think it’s hard to justify the cost when there a billion online for free. This is a complicated product to review.

I’m going to cover the back half first. There is room in my life for something like this. Something LIKE this, but not this. It’s a bunch of tables that, using, you can generate an adventures, and its various elements, from. For example, the trap section has six tables that you can use to generate a trap. First, what kind of saving throw does it require. It’s its Charisma, then there is some kind of fear to overcome or someone to fool. Then, what are the consequences of the trap. This is what type of damage (cold, acid, fire, etc) and what it does (blind, charm, frighten, stune, prone, etc.) Then there’s the style. A fake trap, leftover creature trap, natural trap, etc. There’s a couple of “severity/damage” tables, purely mechanical. So, rolling we might get INT save, Psychic Damage, Exhaustion, creatures corpse rigged as a trap. What kind of trap does that spark in you? A mind flayers body falls when you fuck with something, his tentacles kering that trigger a psychic blast that exhausts people? Not bad, plus we’ve determined that you can weaponize a dead mind flayer, which I like also! I like this concept and there’s room in my life for it, but I don’t think the print element works well. I might pay $10 for website access for HUNDREDS of table entries for each element. For example, for encounter terrain there are 20 entries and one of them is “floor is littered with skull and bones.” I might instead like to see “X littered with Y.” More variety and possibilities. It’s just an idea generator, after all.

The adventure, proper, is decent. I suspect it’s meant to be an example of how to use the tables, and it has some modular aspects to it that I think make it weak for “on the fly” use. Being modular, you need to do some rolling on tables then then some thinking to put the whole thing together to have it make sense before you run it. Yes, it IS a toolkit, and I guess that’s the difference between that and an “adventure.”

The hook generator, character motivations, and adventure twists, all tables, are pretty decent. But, I really want to touch on the Locations, encounters, and NPC’s. These fit three or so to a page, in a shaded box, and after about two sentences of read-aloud they are presented in bullet point form. A little verbose by good OSR standards but it does a great job in being easy to scan and providing impressions for the DM to work from. “The Altar of Sorrow” has the following read-aloud “A simple slab of rough-hewn stone dominates an alcove in this entrance chamber. A stone stairway leads deeper into the keep.” Short. A little generic, but good enough. The bullets though, in the DM text/bullet points, are pretty good.
A simple stone dais, cluttered with worn copper coins.
Yellowed bones of various shapes, sizes, and sources.
Scraps of parchment with words denouncing the Frozen King and his reign.

There are some sounds and sensations also, which get a little melodramatic, especially given that there are multiple sounds and sensations presented for each room. Pick one and go.
The locations are augmented by the Encounters, which the random element helps you place in the room. Again, about three or so per page and well formatted, using bolding, to help separate information. And, again, too long, dwelling too much on each aspect, but the core concept is a decent one.

Even the setting background is interesting, presented in about one page, in bullet points, detailing the world ala a Campaign Questionqire aka “The powerful wizard in the world is X” It’s not in that format, but give you an idea of the organization. I liked it, and might even pay for a booklet of one page campaign worlds in this format.

I liked just about everything in this, in their component parts. The location and encounter text does get a bit long, beating a dead horse instead of getting and out quick. If the publisher could learn from that then their actual adventures would be pretty good.

This is $10 at DriveThru. The preview shows you the die drop section and the last two pages of it show you the Midnight-ish campaign world. Alas, nothing of the core table elements or adventure pages though.https://www.drivethrurpg.com/product/224724/Oath-of-the-Frozen-King–Adventure-Kit?affiliate_id=1892600

1 Response to (5e) Oath of the Frozen King