Spores of the Sad Shroom 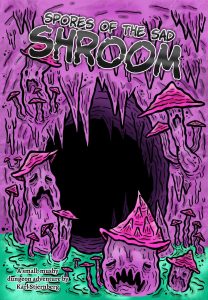 By Karl Stjernberg
Self Published
OSR

A spore-filled series of caves where everyone is sad, sad, sad!
Console sad fungoids, argue with a gargoyle, risk getting your skin melted off and replaced by a moist, spongy matter! All that and more, in Spores of the Sad Shroom!

This sixteen page adventure details an eleven room dungeon full of mushrooms. Nice detail, terse writing, great treasure, freaky effects all bring the mushroom vibe. It’s just a tad too “system neutral” and a bit short, otherwise it would be a home run.

This thing brings the detail, that’s for sure. Or, rather, it brings the specificity. I’m a strong believer that being specific in your dungeons really cements a scene in the DM’s head and allows them to expand upon it. That allows the designer to communicate far more than the actual text they write. At one point, if you talk back, this could happen: “An angry mushroom-brute takes one gigantic step out of the wall and cracks its knuckles, loudly. It insults trespassers and gut-punches anyone standing up to it.” That’s a good example of being specific. It really cements the entire scene and communicates the flavor. It does it in just two sentences. It doesn’t drone on with details, or text, or meaningless backstory. It’s an icepick to the brain of an idea. This adventure does that over and over again. It’s one of the more terse written written adventures AND one of the most flavorful. In fact, I’d say this is pretty close to perfect as you can get and still use sentences. There may be other formats, like bullet point phrases or “impression words” (used to such great effect in Hyqueous Vaults) that can also be used, but, for sentences, this one is close to the top.

Looking at just the “what happens if you talk back” table, you get anxiously apologizing mushrooms who explode, wailing in emotional pain mushrooms, kill me and eat me mushrooms, the knuckle-cracking mushroom, an especially emo mushroom, and a NPC henchman mushroom that steps out. That’s a great deal of detail, and doesn’t even cover the table at the rear to help with the inevitable “I eat a mushroom” character action.

At one point there’s a river and the text offer three possibilities on where it goes if the characters want to further explore it. All three are magnificent and you could build a lot of fun around them. “The other evil manta rays are jerks!”

The treasure can be great. From mushroom effects to hollow magic swords, gobets to be repaired, fingernails and eyeballs (ala Vecna) it reveals in the OD&D non-standard vibe that I love so much.

No everything hits on all cylinders though. Most of the rumor table is, in contrast to the rest of the adventure, a little generic on detail. “A great evil was sealed down there.” Uh, yeah. Ok. That’s a good example of NOT being specific to the detriment of imagery and helping the DM.

Further, the adventure is almost systemless, needlessly I think. It doesn’t really provide stats for almost anything, except for a couple of new monsters. “Gargoyle” you get to go look up in your own system. Further, there are areas that could be trapped, or, another adventure, have some mechanic associated with them. In one area you pull a sword out of a mushroom and are sprayed with sticky liquid. That’s the extent of the mechanics. “ you are sprayed with sticky liquid.” I really like lightweight mechanics … but I’m colder on “no mechanics at all.” The original mind flayer and his 1d6? That’s fine. Older D&D versions, clone or not, are close enough that this could have been for Labyrinth Lord and it would not have detracted from it.

It’s also short, at eleven rooms. It feels like you just get in to the swing of things and then its over.

All of that old D&D mushroom art, from Sutherland and his ilk, sure seem to have had a disproportionate impact on the OSR. It strikes me that a higher percentage than normal of mushroom adventures are pretty good. Maybe it’s the permission to be more fantastic and less Tolkein?

This is $6.66 at DriveThru. The last two pages are representative of the product. There’s a bit on mushroom commenting on the party … and the repercussions of giving them lip back, as well as the first three or four rooms. It’s a good preview.https://www.drivethrurpg.com/product/230641/Spores-of-the-Sad-Shroom??affiliate_id=1892600

9 Responses to Spores of the Sad Shroom