(Pathfinder) Teeth of the Storm 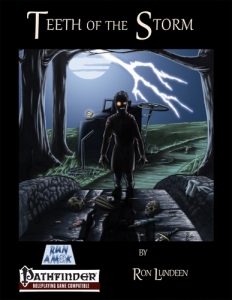 Late at night, the storm howls and sheets of rain fall. The High Road is supposed to be safe and well-traveled, but this stormy night there has been no one else on the road and no place to stop for shelter. A gruesome scene on a rain-slicked bridge leads to a nighttime race to grant a restless soul peace.

This 38 page “adventure” has eight scenes. You’re trying to track down a local nobles undead kid and put him to rest, complicated by a troll running around. Linear, padded text, too much read aloud, endlessly droning DM text. Also, at least one good bit of imagery, but, like Paperboy, it’s not worth it, kid.

Scene 1: You stumble on the scene of a battle on a bridge, then skeleton attacks. Scene 2: Meet aristo at an inn. Scene 3: Troll attacks. Scene 4: Aristo pleads with party to take over his mission. Scene 5: Chase after the troll. Scene 6: Party kills undead kid. Scene 7: Fight maggots in graveyard. Scene 8: Put kid to rest/fight undead. This takes forty pages because … well … the designer doesn’t know any better? I can only assume they’ve only seen examples of shittily written adventures.

Three sentences. THREE. FUCKING. SENTENCES. That’s how much read aloud you get to put in a time. You put the fucking information in the adventure in such a way that the DM can communicate it AS the NPC. Or in back & forth questioning/responding to the players.

I don’t know what the fuck else to say. The DM text is padded to fuck and back with endless trivia and go-nowhere statement. Hence the forty pages. “The party might be suspicious of the open gate in to the cemetery, particularly is they realize it detects as magic and requires a Will save for some reason. Therefore, the party might instead decide to enter the cemetery by climbing over the fence or obelisk.” This is after a paragraph listing the climb DC’s for the fence & obelisk. “Once inside the party must locate the kids resting place.” Uh huh. You forgot to say they also need to breathe.

The designer doesn’t know how to write an adventure. The ideas aren’t in and of themselves bad, but he presents them in just about the worst way possible. An aristo hunting his undead son, a vindictive troll … the dead of night in a storm .. it’s a good gimmick. At one point skeletons claw their way out of corpses, bursting them, in order to attack. That’s pretty fucking good right there and EXACTLY the sort of imagery I’m looking for in an adventure.

I like the overall idea but it’s close to incomprehensible here, buried in the text the way it is.

This is $6 at DriveThru. The preview doesn’t work. Sucker.https://www.drivethrurpg.com/product/104119/Teeth-of-the-Storm?affiliate_id=1892600

2 Responses to (Pathfinder) Teeth of the Storm