The Mystery at Port Greely 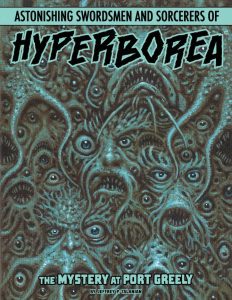 Until about three years ago, the peculiar town of Port Greely was renowned as a proli c exporter of crustaceans. en the Greely lobstermen severed all ties with outside partners. Subsequent attempts at renegotiation were shunned. More recently, a small group of Fishmongers’ Guild representatives from the City-State of Khromarium has gone missing in Port Greely, and answers have been less than forthcoming. At present, the Guild seeks answers. It wants to know what became of its representatives, and it wishes to re-establish its lucrative partnership with the Port Greely lobstermen. Your party have been contracted to help resolve e Mystery at Port Greely.

This forty page adventure details a corrupt town and the underground temple of fish-men in charge. It’s a typical Talanian AS&SH adventure, which means strained text at the expense of usability. Jeff’s formatting continues to be an issue also. Both contribute to an adventure hard to get in to. It’s a dungeon with thirteen rooms for christs sake, and takes forty pages to do that.

Hate it or hate it, Talanians got a style. I love to tell my wife that it don’t matter what style you got as long as you’ve got one. I’m wrong/a hypocrite. It does matter. Rule number one of adventure writing is that it is technical writing. The thing has to be useful for running a game at the table. You can also use it to start a fire, line a cage, get inspiration from, or read for fun. But, it has to first be useful at the table.

Talanian uses footnotes. That’s a good example of using formatting to help refer DM’s to other useful information. “Where do I find more information about orcs? Oh yeah, the footnote says page 23!” Perfect!
But most of the adventure text does NOT contribute to usability. Parts of the adventure feel more like an Appendix N novelization of an adventure. One of the first locations is a tavern in town and that vibe is present throughout. The arrangement of the text seems more like novel writing than adventure writing.

Some of this also has to do with the formatting choices made. Page twelve has a description of a room that seems to be all over the place. The formatting, leading sentences, bolding, all seem to contribute to an almost random stream of consciousness description of the room. Scanning it to find something would be a nightmare.

The actual text runs from uninspired to strained. Here’s the description for a giant centipede: “multi-legged, segmented arthropod of 21?2-foot length, feared for its painful, venomous bite. It is but rarely encountered during the day.” Well, ok, yes. Factually true. But it doesn’t really do anything to inspire the DM to action. Further, I would argue that the last sentence is both irrelevant (who the fuck cares? Just modify the damn day/night wanderers table) AND a great example of the strained writing style employed. How about this fine example: “If perchance sorcery or some ability is employed to comprehend their conversation, it seems one fish-man bemoans his ineligibility for certain mating rights; meantime, the others berate the lamenter for a pathetic weakling.” Strained AND am example of if/then writing. One room with barrels of lobster takes what seems like miles of strained text to share an uninspiring vision of the room that could have been done better if it were shorter and used less strained text. “Nine massive marble barrels set in to the floor foam & churn with lobsters.” Done. Talanian tells us, via the last sentence, that these are food for the bob & margaret, the high priests. Joy. So what? Does that have a bearing on the adventure?

Speaking of, the text is loaded with used to be’s. Mixed in to the descriptions is a lot of useless history that will never come up. Island 4 is a great example of this, with the text full of a history lesson. This does not contribute to good scanning of the text.

I could bitch about other things also. The ship’s captain, probably important to the adventure, doesn’t get a personality at all. At one point the party is probably captured, in town, only to be freed by some rebel townfolk. What’s the point of this? It smells like plot. In fact, the entire town section seems weak. It’s supposed to be an Innsmouth-like situation, and at one point they chase and hunt the party in town … but there’s almost no guidance on this or things to spice it up and make it fun. That’s the point of someone else writing it beyond the running dm: to provide the running DM some guidance. Otherwise what value are you adding?

Just Another Innsmouth. And not as good as Scenic Dunnsmouth. Move along. Nothing to see.

This is $10 at DriveThru. The preview is four pages and shows you nothing by a couple of paragraphs of the hook.https://www.drivethrurpg.com/product/187120/The-Mystery-at-Port-Greely?affiliate_id=1892600

1 Response to The Mystery at Port Greely