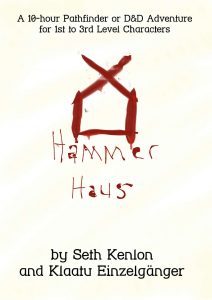 Mrs. Wyverstone has a simple job he needs done. She has a home she wants built. The foundation has already been laid, but her building crew has abandoned the job. She needs a crew to go in and finish the job. She says any able-bodied idiot can do it. So why is she hiring adventurers?

This forty page single-column linear adventure details the parties attempts to build a house(!) for an old woman. It is, essentially, just linear event encounters. Single column, a railroad, unorganized, it still manages to not score WORST EVAR by giving the DM some advice. Barely.

Man, where to start? The lady who who owns the tavern is building a house and needs some workers to complete it. She’ll pay you 1000gp, parceled out over the project, to do the job. Inflation seems to have hit Pathfinder pretty hard. I don’t think the size is ever mentioned, but the mason does the walls in one day, by himself, and then does the roof and door in one night, so it must be pretty small. 1000gp for a hovel when you own a tavern is pretty rough! But, enough sillyness!

Encounter one. You hammer in the last few nails to finish the framing. It’s a DC17, with failure meaning it takes five blows to drive the nail. Five hammer dings will summon an angry spirit that attacks. (Seems the build site is on a graveyard …) The spirit isn’t stat’d, instead the DM is given the advice of “use whatever stats are appropriate to the level of the party.” Uh, No. That’s your job, Mr. Designer. I “bought” this adventure because I didn’t have time. It’s your job to provide me the tools I need to run the adventure. Uncool, not stat’ing the thing. Further, the DM is supposed to have a number of undriven nails appropriate to the parties APL. Again, no advice given. YOU DON’T GET TO FUCKING DO THIS. Just stick in a small table telling us how many for what APL. It’s your fucking job as a designer!

Oh, oh, the main villains identity can change! The woman is, of course, and evil witch. Unless the party catches on too fast. Then it’s the mason that’s evil, or … and get this … it’s her husband who’s been gone for six years. Yes, Mr Not-appearing-in-this-adventure and never mentioned before is the bad guy who swoops in at the last moment! Nope. Again, a TERRIBLE design principal. You don’t get to change the ground under the party. You don’t get to run an encounter “until the party is almost defeated.” You set the fucking scene and run it in a neutral manner, with an eye towards fun. The players HAVE to be able be make meaningful decisions and they CAN’T do this with the DM just doing whatever the fuck they want whenever the fuck they want.

At one point the characters fall through the ground in to a little crypt complex. There’s no room/key format, the first couple of rooms are described in one big text block that you have to dig through to figure out what goes with where.

This shitshow does, however, do a few decent things. There’s a flowchart at the beginning to tell you how the adventure works. That’s a good choice for an event based adventure … even if it is unneeded here. It also has a pointer to some free resources, for an inn layout and NPC’s, which is a nice little touch. That’s a good value add. Finally, it offers some advice on the hook. “Building a house may be the least sexy thing your party would choose to do.” No shit. But, it does present some advice to get the party involved, a couple of NPC’s talking about eerie things at the bild site, etc. It’s a nice nod to trying to provide resources for the DM at the table.

I know it’s $0. It’s not worth it. I like the absurdity of the telegraphed villain … because I like shit like that. But the rest of the adventure, man .. .I don’t think I could ever run something like this for people.

This is PWYW at DriveThru, with a suggest price of $0. The preview gives you the entire adventure, since it’s free. Note page 13, which shows the “free text” room descriptions.