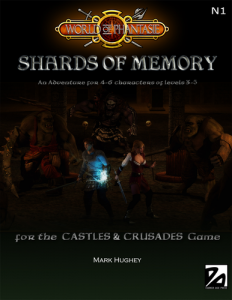 After awakening in an immense cavern amidst the signs of an unearthly struggle– with little clue what happened– the few scattered survivors piece together that they are behind enemy lines, and will need their wits and their swordarms to return to the surface and report what has happened. But along the way, they find that their battle is a small part of a much grander scheme, one that may embroil all of Melcanth in war!

My life is a living hell.

This 48 page linear adventure has about a dozen dungeon rooms that lead to a small town with about another dozen encounters. The premise is great, but massive Massive MASSIVE read-aloud and wall of text for the DM makes this a “Must Skip.”

The premise is decent. In all the tropes the good guys rush in at the last minute and battle the bad guy and save the world. There’s usually some *boom* with a ring shaped shockwave that fattens everyone, etc. This adventure starts RIGHT THEN. Awake in a cavern signs of evil lights & summoning. Hordes of dead orc & legionnaire bodies … of which you wear the same tunics. You seem to be the only survivors … and have little to no memory of what happened. Pretty sweet start to a campaign. Except this one seems to start at level three to five … but whatever.

The initial read-aloud is a page long. When you find a survivor, his read-aloud is a column long. And that’s before all of his LONG scripted read-aloud answers to the players questions. Half a column seems like the minimum read-aloud length for this adventure, per room. Even the empty rooms, of which most are, get extensive read-alouds. Players don’t like read-aloud. They don’t pay attention. If they tell you otherwise they are lying to you to be polite. I am 100% certain of this. An article by WOTC, observing organized play games, noted that people stopped paying attention after two or three sentences. There’s some kind of control issues, I think, mixed in with this read-aloud. The survivor, when questioned, has a read-aloud for each answer. This is in contrast to a different style, which might be summarizing what they know in a short list of bullets, or a one or two summary note for the DM per question. But, that would allow the DM to deviate from THE STORY and perhaps interject some of their own personality in to the scene .. and thus it cannot happen.

The DM text most often appears as a long paragraph, wall of text style. Important facts appear mixed in to the text, making them hard to find. There’s a weird description style where the scene is set with things “it looks like the campsite was in the process of being abandoned …” and so on … only to have text like “there are four orcs and their leader sifting through …” Well, fuck man! Do ya think you might have moved that up a bit in the text? That would seem to be the most obvious things the characters are going to see when they have a looksee. There’s no effective use of organization to communicate information, only an almost stream of consciousness like flow of words.

And then there’s the description abstraction. You find some refugees, hiding in their house. They have some information. One family tried to stand up to the orc army looters and died in their yard. That’s the text. That’s not what happened. Old man Johnson and his boy stood up to them and saw his wife Marie and their daughter cut down before their eyes before they were gutted. SHOW, don’t tell. Be specific, without being wordy. One is flavorful and effectively communicates a vibe. The other is abstracted garbage.

There is not really anything special about this adventure. The starting dungeon element is completely linear. The town part is a little better, because of the chance of refugees to spice things up, as well as looter stragglers. But You have to wade through the wall of shit text to get there.

This is $7 at DriveThru. The preview is four pages and takes FOREVER to load (Did I mention the download is 100meg?) Your reward is the entire perview being the bullshit pages long backstory.https://www.drivethrurpg.com/product/174847/Shards-of-Memory?affiliate_id=1892600

3 Responses to Shards of Memory