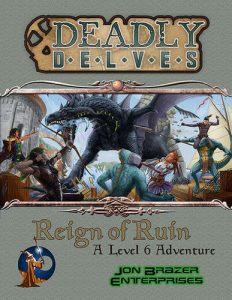 Rumors of death move like a plague through the Crannogtowns of the Great Swamp — of ranger patrols mysteriously disappearing on routine scouting missions, of a winged shadow that blots out the midday sun, and of entire villages slaughtered, their homes left burning and the victims’ flesh melted from their bones. All evidence gathered from the sites of these massacres points to the heart of the Great Swamp, where an ancient and primitive tribe of lizardmen have ruled from an abandoned human temple for centuries on end. The Crannogtowns’ protectors, the Stormhammer Rangers, warn that horrid half-dragon monstrosities still stalk the bogs and travelers would do well to stay away from the inner swamp. Yet the killing and the carnage continue, and the people of the Crannogs plead for heroes to aid them now as they did in days long forgotten. Are you up to the challenge?

To paraphrase: Stupid, worthless, no good, goddamn, freeloading son of a bitch. Retarded, big mouth, know-it-all, asshole, jerk. “You forgot ugly, lazy and disrespectful.” Yes, yes I did. Thank you for reminding me.

This 34 page piece of absolute garbage detail a “five level” temple with about twenty rooms where lairs a black dragon. 5e/PF conversion piece of shit, wall of text, combat/set piece fuck fest and historical descriptions all contribute to the most worthless piece of garbage I have reviewed in a long time. Everyone involved should be ashamed. I’m going to try hard to criticize ideas and effort, not the people involved, but fuck, man, how does your life get to the point where you care so little about the crap you put out and attach your name to?

This little thing is a conversion. How do we know that? Well, there are versions available for 5e, Pathfinder, 13th Age and Swords & Wizardry. But, even if you don’t know that, let me suggest that the presence of monster called a “Ixtupi dragonblood brute” is pretty much a dead give away. Conversions don’t have to be bad but almost always are. Different systems tend to have a different vibe to them and its hard to convert that vibe, especially, I would suggest, between something like 13th Age and Swords & Wizardry. There are mechanical aspects as well such as, say, XP. The adventure proudly states that 6 characters should get enough XP to gain two levels, each. A fighter going from level six to eight will require about 100,000xp. For quickness, let’s say it’s 600,000 for a party of six. The dragons hoard contains 10,000gp of treasure, that being the major source of XP for S&W characters. It’s fucking absurd for a S&W character to gain two levels in an adventure. Even simple things like stat conversion can be hard. At one point early on some baddies attack a village. A bunch of 2hd dudes and a couple of 4hd ones. “Its a hard fight” says the adventure, “so four 3hd guards join in to help.” Sixth level S&W characters are badasses. There is a fundamental lack of knowledge about S&W shown, the mistake almost every conversion makes. Skeeter did the conversion while Richard was responsible for the bulk of the crapfest, I believe.

The writing and formatting is fucking atrocious. It starts with a two page backstory. I know I’m being genter about backstory these days but FUCK I hate having this failed novelist shit passed off on me. I don’t know if this is pay per word but it sure as fuck feels that way. Or, worse, maybe a vanity thing with being too attached to your own headspace. Anyway, the sin of backstory is always “Do I have to fucking read your failed novel in order to run this thing?” In this case, yes, you do. The hook is mixed in. The adventure has tendency to suddenly present a place name and start talking about it. You are left wondering how the fuck you got there. Well, gentle reader, it is always the case that it’s mixed in somewhere to the wall of fucking text that comprises the writing. Right in the middle of a page of fucking wall of fucking text will be something saying “the village of Mistleshit is the next target.” It’s just fucking relentless text. Droning on and on. Burying anything of value in it.

Ah, and the read-aloud. LONG read alouds. A quarter of half a page of long drawn out droning boring read-aloud, overwrought prose that is worthy of spoon gagging. THREE FUCKING SENTENCES. That’s what you fucking get. THREE. No one fucking cares beyond that. People don’t pay the fuck attention, and for good fucking reason.

Oh, and our DM text. Full of such wonderful phrases such as “Once a sacred place of worship.” FUCK YOU. HOW THE FUCK DOES THAT CONTRIBUTE TO ACTUAL FUCKING PLAY? ITS FUCKING PADDING YOU GIT! You’re fucking goal is not to paint a fucking picture russian fucking novel style. It’s to help the fucking DM run the game. Bombarding the DM with useless trivia, like “once a sacred place of worship” does not fucking do that. It does the fucking opposite. It clogs up the text and makes it fucking useless to actually find the meaningful text in the fucking adventure.

The fucking maps are impossible to read and find exits, etc. The wanderers are just presented on a table “8 itlixy and 2 sorceresses” Ok. And? Doing what? Friendly? Want to talk? The actual fucking encounters are little more than “Enter room. Fight. Next room.” This is a fucking grind not an adventure.

Look, fuckwitees …er … I mean “individuals who produced a fuckwit product”, I applaud the fact you created and printed something. It sucked ass. People telling you otherwise either have no standards or are being polite to you. This thing sucks shit for a living. Keep writing & creating but, for the love of all that is fucking good in life PLEASE do a MODICUM of research on how to format your shit for better comprehension. Start there, and then we can move on to “actually creating good content for an adventure.”

This utter piece of garbage is $10 on DriveThru. Page four of the preview is a great example of literal wall of text you face as a DM. No formatting to help you out. Bolding, clue outline, whitespace … none of it. Just a wall of fucking text.https://www.drivethrurpg.com/product/224526/Deadly-Delves-Reign-of-Ruin-Swords-and-Wizardry?affiliate_id=1892600

I am fortunes fool.

11 Responses to Reign of Ruin