(5e) The Halls of Runehammer 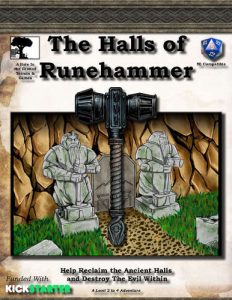 Fuck me, man. It’s 95 fucking pages long! Come on, if you’re gonna publish shit at least make it short to reduce the suffering of the fuckwits who end up with it.

This thing is divided up in to eight episodes. Each episode has a couple of sub-parts. The adventure has some nice large mass combats, which I always find satisfying, but that doesn’t keep it from being an UTTER PIECE OF SHIT!

The adventure is episodic with the episode outcomes not being determined by character actions but rather by “when things appear grim.” IE: the adventure is arbitrary; there is no player agency. Your actions do not determine your outcome.

The first episode has you relaxing in a crowded inn. “A well armed and agile skeleton bursts in.” What follows is an endless number of skeletons. The instructions are, literally, to keep pouring them in the inn. Doors, windows, they are coming in. The inn is crowded. The people in the inn have personalities (Great!) and there is a kind of slow desperate retreat upstairs.

This is all pretty good, at least in theory. “Army of the Dead” is a popular trope, but the party almost never faces the full might of the army. Adventures always throw in a couple of skeletons or zombies out in the wilderness. Not this time. The army of the dead is attacking the town and every building in it, and grabbing people and taking them. The entire town, and your puny inn is just one part of it. There’s a shit ton of skeletons that create a desperate vibe and a lot of innocent people, panicking. The people have personalities and that can contribute to the desperate situation inside the inn.

Except the designer fucks up nearly every aspect of it. There’s not just a lot of skeletons, there’s an infinite amount of them. The instructions are to call them off once the situation in the inn gets desperate. Fuck. You. This is a shitty designer attempting to create tension through fiat. That’s not D&D. You set up a situation and let the players handle it. THAT is D&D. The former gives the players no agency, their actions are meaningless. Use your daily or just burn you at-wils, so to speak, it makes no difference.

The personalities of the NPC’s are useless. The blacksmith is gaining a reputation as good and reliable and doesn’t talk much. The Farmer is one of the biggest suppliers of fresh food & meat to the Inn. The waitress is hard worker, one of three bar wenches. And so on and so on. ALl of these have in common a lack of potential energy. The descriptions are generic people descriptions, maybe useful if you were moving to town and talking to the mailman. But that’s not what is going on. It’s a stressful situation in an inn under attack. The personalities need to be oriented toward the action. The farmer tries to save his rutabagas is actionable. The dwarf is lame AND hates the undead. The bar wench freezes or hates the undead. The fucking NPC”s need to have data presented that is relevant to the fucking adventure.

Finally, let’s note that the description tells us that a “well-armed and agile skeleton bursts through the door.” L.A.M.E. Those are conclusions. The read-aloud should present information that lets the players draw conclusions. Describe the weapon. Describe something that makes the players think the skeleton is agile. Give us a nice image of the undead bursting through a door of a cheery inn during a thunderstorm.

And did I mention that this “episode” takes four pages to describe?

This happens over and over again. LONG sections to describe “normal” D&D things. “When things look grim, have the ranger show up to save the party from the wolves and drive them off.” Oh, and the arbitrary shit for the purpose of narrtive? How about:
“For purposes of the game narrative the door can not be opened by any low level spells such as knock or dispel magic. On the other side of the door is a large overwhelming force of the undead.”

Uh, No. It’s the players and their characters journey, not yours.

But some of the scenes are great. Mass combats. A bunch of orphan kids in town after the attack of the army of the dead. There are even some summary sheets for the episodes, which I thought were great. If they were better written you’d be able to skip the massive adventure text.

But NONE of it is worth the downsides. MASSIVE text to wade through for no player agency and a DM-driven “story.”

This is $5 at DriveThru. The last four pages of the preview show you the first episode, the attack on the inn, and show you both the good and the bad.https://www.drivethrurpg.com/product/219586/The-Halls-of-Runehammer–A-Classic-Dungeon-Crawl-for-5E?affiliate_id=1892600

5 Responses to (5e) The Halls of Runehammer