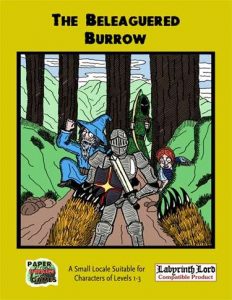 A lonely hill concealing terrible tragedy. Orcs and goblins in a standoff. A monstrous predator.

This twelve page adventure details three interconnecting cave systems featuring an abandoned gnome burrow, an orc outpost, and a goblin lair. There’s some faction play present, and the overall setup has a charming/simple vibe present. The adventure takes a lot of words to describe mundane things in detail, which detracts significantly from its ability to actually BE a charming little adventure.

There’s no real hook, just a throw away line about a poster with rewards for monster heads and to go to a hill a half day away. There’s no read-aloud either, which is a joy after the last few reviews page long monstrosities. There are three cave systems under the hill, all interconnected and all that also have outside entrances. The first was a gnome burrow that was taken over by an owlbear. The second is an orc outpost, with a gnome owlbear survivor tricking them to attack the third caves: the goblins who sent the owlbear to the gnome burrow. Stirge fly out of holes, the owlbear has a rank smell, the goblins caves also have some webbed corridors with a giant black widow or two. (PERFECT! I LUV “real” monsters that are relatable, especially at first level.) You can talk to the orcs, since they have a couple of goals other than “kill everyone they see.” That’s good and can add a depth to the adventure and some interesting situations … which is why the fuck I generally advocate a couple of NPCs in the dungeon. Talk to someone, ally with them, enjoy the roleplaying and the problem solving your new friends can help you with. You can always stab them later.

But, charming though it is, this should really be just a couple of pages, not twelve. It’s not full of appendices and pages of introduction and background, it’s actually just room after room. But .. the rooms are pretty poorly written. It falls in to the common mistake of describing the mundane. The kitchen describes everything you would expect to find in the kitchen. The coat closet describes everything you would find in a coat closet. The bedroom describes a bedroom. And it takes several sentences/a long paragraph to do that. We don’t need that. We all know what a kitchen looks like. The descriptions should instead focus on the “the different”, and in particular, that which is relevant to actual play. The kitchen description, after the long boring normal description, has a second one that has the table smeared with blood and viscera, where the owlbear caught a gnome and ate it. That’s great. The closet has the outfits of a gnome family. It’s good to know there are five and one is a child, but that can be communicated to the DM in a method OTHER than a long drawn-out description of the quantity and length description of each object.

The overall effect is to hide the important information and make the DM hunt for it during play. When if the owlbear at home? I don’t know, let me dig through a bunch of “what happened before” text and then find the “moms at home” data buried at the end …

It doesn’t help, either, that padding words and phrases are used. “Anyone searching will find …” is just padding. It’s an IF/THEN clause. “IF the party searches the room THEN they will find …” That’s all padding. There is a rosewood box hidden under ashes in the fireplace.?-Period. Describe what IS. This is what good editing should deliver for you.

But, just when you want the detail, it doesn’t exist. “A necklace worth 1000gp” is listed as treasure. That’s a lot of cash. Perhaps we could get JUST a bit more description of that? That’s the kind of thing I mean about the focus of the adventine text being on the actual play elements. That should be a famulous necklace that elicits awe and envy in the PLAYERS … all in less than one sentence. That’s the trick to writing an adventure.

This is $1 at DriveThru. Alas, there is no preview.https://www.drivethrurpg.com/product/131298/The-Beleaguered-Burrow?affiliate_id=1892600

10 Responses to The Beleaguered Burrow