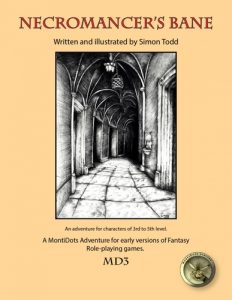 The valley of Highcliff Gard has had a tradition of burying its dead in the south caverns. But guards have heard disquieting noises behind the catacomb doors of late. It may be a trifling matter though another group of guard have not returned from their investigations.

This fifty two page adventure details a two level dungeon with about seventy rooms in it. There’s only about seven pages of appendix and five or so of background, so it’s mostly keyed entries. It’s got a good map and interesting encounters, but could use better organization of the actual keyed rooms. Droning on in places, a key aspect to writing is to know when to NOT add words.

This is part of an interlinked series of adventures. From that standpoint, you need to enter the crypts of a noble and cursed family to retrieve a bone. From that they can make a flute to help remove a curse on the male lineage of the family. But … the guards sent in to get it didn’t come out and there are strange noises coming from inside. They’ve barred the doors and send you in. The whole “curse on male line” thing is a classic and it appeals greatly to me. There’s also a nice little scene before entering: you have to go get the keys from the gravedigger. There you find out he won’t let you in, he’s wearing a bloody apron “cutting meat for the dogs”, the kitchen is full of blood with bloody footprints … etc. His dead wife is in the basement, reanimated as a ghoul, and he’s feeding her already dead villagers. She’s ranting about “the master” … seems An Evil One is back in town in the crypts and his influence has raised her. There’s also a clue or two about the dangers in the crypts, like a giant black and yellow furry spiders leg. This entire section is done quite well. Simon does a good job of communicating a horrible scene. Long knives, fresh and old bloodstains on the floor. Bones of sheep in a bucket under the table. Fresh bloody footprints leading to the cellar. Guttural growling from below. It builds tension well, and, ultimately, pity on the gravedigger results in clues for the party … a great reason to not gack him.

The dungeon, proper, is quite good. The maps are complex, with a variety of room sizes and shapes, some loops, some use of color and terrain features. It’s a Real Deal dungeon map. It’s not exactly Many Gates of the Gann or WG5, but it IS in the neighborhood.

More important, though, are the encounters. The first actual room (the doors being encounter one) has some slender column topped with small angelic faces. Whose eyes are wet and red. They are crying blood. Small droplets eventually splash on the floor, contributing to a red mist. After awhile the mist coalesces in to a Sanguide Fiend. Wowsers! Great imagery! Great “get your fucking ass in gear!” timer to push the party along. Hey man, any statues crying blood that turns in to a red mist is ok in my book!

This is not an isolated incident. There’s a survivor of the previous entry, traumatized and injured. There’s a cave with 300+ zombies in it, shambling towards the party, many more disintegrating as they emerge from the watery depths. (nice imagery!) Tracks of blood to crypt doors. Heads whose eyes open to stare at the party. And, of course, the ever popular “room with three thrones. Who wants to sit on one?” (I ALWAYS sit!) There’s a great horror vibe in this adventure and some decent interactivity. It FEELS like a crawl through a horror environment, full of suspense.

Man this thing is a mess. If I were to consider there to be three elements to a successful adventure: evocative writing, interesting interactivity, and organized text, then this thing is, well. Missing the mark. It’s got some decently evocative writing in places, but not everywhere. The interactivity is there in a hit or miss way. And the text needs some MAJOR help in being organized. There will be a paragraph describing something in the room and then another one, later down, describing some other major feature. What it’s lacking is a kind of orientation to the room. It looks a lot like: “there’s a table. Here’s two paragraphs about the table. Also there’s a 40’ tall statues of zeus, here’s two paragraphs about it” instead of “there’s this black table and 40’ tall statue of zeus dripping blood.” and THEN going on to describe those things. Effective writing for a DM scanning the room to run it for the players. It also goes on at length sometimes about the trivial, leading to some rooms taking up a full page. And then other rooms, typically individual crypts, get long-ish write ups with little (fight monster!) or no (empty) interactivity. Barrowmaze found a way to get these sorts of encounters in without them dragging on and that’s something this adventure could have learned from.

Frankly, I find the text hard to get through, hard enough that I’m not even sure that a highlighter would help. A column per room, or a page per room in places, makes it hard to figure out what is going on with the descriptive style being used. This needs a good edit to clean it up A LOT.

This is $5.5 at DriveThru. The preview is six pages. The last two detail the gravediggers house. Rooms one and two show that horror element I was referring to. You can get a decent sense of the … mixed? Writing style from these, but the actual rooms in the catacombs are much worse, from an organizational standpoint, than these few initial gravedigger rooms. https://www.drivethrurpg.com/product/192982/Necromancers-Bane?affiliate_id=1892600