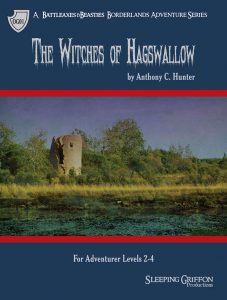 People and livestock are going missing again in the areas that border the Hagswallow Bog. The locals think the Witches are to blame. It is said that they are found near an old, ruined tower near the far edge of the bog. Will the Adventurers save the missing people and put an end to the menace of the mysterious Witches of Hagswallow, or will they disappear into the bog as well, never to be heard from again?

This 46 page adventure details the exploration of a ruined manor tower and it’s dungeon. 37 rooms come in on 24 pages, with the rest being maps, pregens, and appendices. A simple & direct writing style is quite evocative with great use of showing instead of telling, even if it wastes space with explaining WHY things are. It’s a good, basic D&D adventure.

The intro & background are nothing special, but for one reason. Reading it, and the title, I thought for sure it was another hag adventure. Then there’s the background, describing very generally what a bog is, and some shitty hooks like “you see a tower in the distance” or “a relative goes missing.” This entire intro section is perfunctory and you could almost remove the entire thing without losing anything. Except … the locals give an account of the hags. Tall. Sing-songy voices. Oh, so unusual hags then? No. Harpies! TOTALLY had me fooled. Like I said, the entire intro is just garbage, except for the bit about the descriptions. There’s not even an investigation or a village, just some very abstracted notes about background and the general description.

Looks, that’s all shit anyway, what I really want to talk about are the room descriptions in this thing. It’s one of the best examples of showing instead of telling that I’ve ever seen. It its all of the notes that SHOWING gives you. This starts, I think, with a description of the prisoners of the harpies, that comes before the keyed entries. The teenage boy Yar lives in the bog and can find his own way home but thanks for the rescue. The teenage Girl Peneolpe Hazzar, father=merchant, who argues with her father and he probably thinks she ran away. The large mentally challenged fellow karl, who heard the pretty music from the angels and was hauling shiny rocks from past big mountain to horse people. That’s all great; short and it gets their personalities and goals across immediately.

But then, in the keys, it gets even better. The smell of mold, rotten wood and decay with fungi growing of many surfaces of the stable, skeletal remains strewn in the hay. Damp, mold-covered and cracked stone steps leading up to a door. A floor in the tower thick with harpy droppings and feathers floating in the air. Not enough? How about a prisoner who’s had strips and bits eaten off of her while she’s shackled to the wall? No? How about a room , a nesting area, decorated with the remains of her favorite snack, children. EVIL. That’s difference between saying the harpies are evil and showing the harpies are evil.

I’m also fond of the maps, but not in a gushing way. Simple black & white, they look done of a computer. They are easy to read and do a decent job of showing holes in roofs and walls. 37 rooms in six levels (three above and three below) means that the maps are not the most complex. The treasure, mundane and magical is above average, if a bit long winded. A 14” tall ebony statue of a rattoid, very heavy for its size. And then another two sentences explaining it has a gold covering, which is in turn covering lead. Ora small leather pouch, tied shut with braided blonde hair. Inside is a withered finger with a gold ring set with four small turquoise stone. (Aside: “Small” and “heavy” are boring words, try to use better words.) A little long, being about a paragraph each, but certainly richly developed.

I would note, however, that the writing isn’t exactly tight. This brings up the spectre of locating information. It is the Old Wound My King. Room ten on page elevent is a GREAT example. The room takes a column. About a third is a generous monster stat block. The last section is the treasure/what you find if searching, laid out in bullet points. This sort of organization is really good. You know where to scan for what information. But it’s the first section that’s an issue. Here’s the description:
“The harpy Lyvyne nests in this room. She is the second most senior harpy in the aviary and wants to be the Harpy Queen. Although she has the largest area of this level of the tower, most of it it open to the sky and elements. An especially vile specimen of her species, Lyvyne has decorated her nesting area with the remains of children, who she nds particularly tasty. In the straw on the western side of the room is Lyvyne’s pet Bogsnake, Grilla.”

Most of this is padding. The first, second, and most of the third sentence could go away, as could the “an especially vile specimen of her species” clause. There’s not really any factions within the harpy clan, or NPC interaction, so the whole second most senior, etc is just wasted space. The net impact of all of this is the obfuscation of the critical parts of the room, the most excellent SHOW of the tasty little child tidbits.

I find this adventure charming. A good solid basic adventure. It needs a highlighter. It’s a great example of showing instead of telling, with most of the intro being worthless.

This is $3 on DriveThru. The preview is six pages and just shows you the worthless intro portions. You can see, however, on the last paragraph of the left column on page 5, the witch rumors I fell for.https://www.drivethrurpg.com/product/204302/Witches-of-Hagswallow-Adventure-OG01?affiliate_id=1892600