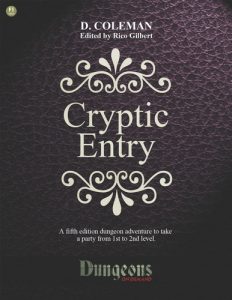 The intrepid Reslin Kine spent many of his years as an adventurer. A life of exploring ruins and fighting monsters garnered Reslin a modest reputation and a modest fortune, enough so that he could retire young from the dangerous career to live out the rest of his life on his plunder. Unfortunately, the rest of his life would come too soon. It was only a week after he learned his wife was with child that Reslin fell ill to the malady which would ultimately lead to his death. He’d be denied the chance at being a father, but he’d be damned if anyone could deny his son his inheritance.

You know that withering sigh that Sideshow Bob has? Yeah.

This twenty three page adventure is a linear exploration of nine rooms, a 2016 Free RPG Day adventure. At a page per room … well, I guess that means all the information you need for the room is on one page? Bad read-aloud, filler, useless DM advice, backstory, journal entries … it’s all here. And it’s boring as all fuck.

We start with a full page of detailed and in-depth backstory, followed by a page of hooks and … I don’t know what to call it. Filler? Crap? Absolutely and completely totally useless to the adventure. Look, I know I’m kinder and gentler lately when it comes to backstory, I mean, just don’t read the fucking shit and skip it, right? It still fucking annoys me. It feels like someone spent a bunch of time jerking off on a backstory instead of actually paying attention to the core of the adventure. The crap filler explains how detect magic works. “You can detect magic in the room you are in.” Uh .. great. “There is no light. The characters will need a light source if they want to see.” What happens when I breathe? If I have to pee what do I do? I CANT FUCKING STAND THIS SHIT!!!!!! Oh! Oh! And the journal entries! There’s are journal entries! “It has “clues” to the rooms. Zoh boy! And you did it via journal entries! You know, the stupidest fucking way possible to communicate information to the players. Put in a mother fucking magic mouth. Put in a fucking booming voice. Jesus fucking Christ shows up and tells you the fucking secret. ANYTHING but a fucking journal!

Oh, and the advice! Like the detect magic and light shit? Oh, it gets better! “The adventure is set in the Fucktard Mountain Range. You can change the name of the mountain range to fit your own game.” This is in an offset section called “Customize” and it takes three fucking sentences to get out. 1. You can change it. 2. What it is called in this adventure. 3 Why it is called that. I know I’m starting to sound redundant, but Jesus H Fucking Christ this is bad. I mean BAD bad.

Our linear map? Ohhh, another special joy. On the plus side we get little mini-maps in the text to show us the room in question. It also has icons on it to show us that there is a monster in the room, or a puzzle, or trap, or a clue. I like this idea, in theory. I fucking hate the way its implemented here. The little fucking icons don’t actually help you. They don’t depict a sound range, or detection range, or anything like that. It’s just a little icon. The room might have bats, or an animated sword, or a an elite tribe of hobgoblin ninjas (it doesn’t.) The icons are just mechanically implemented without any thought as to if they are useful to the DM. Do you need to know that there is a monster in the room if its an animated sword that only animates if you do a certain thing? I would assert No. The purpose is not to note where the monsters are. The purpose is to help the DM run the adventure and if it’s IMPORTANT to know that a monster is there then you put it on the map. The hobgoblins might hear combat in the next room, etc. It’s a cue to a scope larger than the room you are running. But generically putting icons on the map without thinking about it doesnt help the DM at all.

All of this leads in to the rooms proper. A full page each. You know, Kuntz could write a long room description, but his hidden depths at least had something the fuck going on in them. This is GARBAGE. The first room is a cave. It has a bat swarm and an illusory back wall that asks for a password. An entire fucking page for this. And on and on, for each room. An entire fucking page for the most meaningless and trivial of shit.

I hope I fucking die before I forget about this publisher and accidentally review another product from them. And let me say this in advance: “You are correct, it’s not my cup of tea. Because I don’t like a big floating pile of turd in my tea.” Thanks Aziz!

This piece of shit is PWYW at DriveThru with a suggested price of $4. The preview is six pages long and shows you nothing of use. You get to see shitty backstory and the map. Joy.https://www.drivethrurpg.com/product/185231/Cryptic-Entry-Level-1-PCs?affiliate_id=1892600