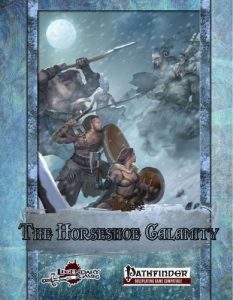 On the frozen frontier far from civilization, a recently-disturbed shrine to an evil god has brought chaos and conflict to a community of centaurs and humans. The humans blame the centaurs’ greed for the plague of undead, and the centaurs seek a powerful magic item—starting with a single horseshoe—to put the threat to rest. Will the spirit of chaos bring all-out war or can both sides face down an ancient menace that threatens to destroy them all?

This 28 page adventure details the exploration of a small evil shrine with thirteen rooms. Set in the frozen north, it provides a small village to get hooked in. Realistic interpersonal dynamics in the village and an interactive dungeon can’t make up for the linear nature of the dungeon as well as the word bloat.

While travelling through the north you come across a village of centaurs and humans who seem to dislike each other but fall all over themselves to welcome the party. Recent charges of cowardice and greed stem from a recently found hole in the ground with a legendary centaur artifact, the titular horseshoe, found in it. The party, hopefully, investigates and has a linear dungeon crawl.

Before I get to that though let me mention the positives. The dungeon, proper, has quite a bit more interactivity than I was prejudging. In fact, I think it has the right amount. The entry passage has clues. An evil alter can be sacrificed on. A hidden in plain sight treasure can cause a ruckus to attract nearby monsters. There might actually be twelve of the thirteen rooms with something going on, from combat to traps to something else to do. And it doesn’t feel like a hack-fest or a trap-fest. There’s a good mix of encounters, they ALL (including combat) fit in well. This is a non-trivial accomplishment and makes the adventure feel like an old school dungeon. There’s even a decent magic item: a consumable that makes you forget one language and be endowed with knowledge of another. That’s exactly the sort of non-book magic I’m interested in seeing in an adventure. The interpersonal situations in the mixed village at the beginning also makes sense, which is rare. Pride, greed, misunderstandings all contribute to a situation where everyone is right and everyone is wrong. That’s what villages are about: the social adventure, and this adventure delivers on that. There’s also a little regional description that includes some gameable background information. One ridge, for example, has a myth of unbreakable oaths sworn on it … a perfect little thing to include in the roleplay.

And the adventure does nothing with it. Lots of text, lots of background data, lots of history, lots of trivia, all to no effect. It gloms up the works and makes it harder to find the actual gameable/useful data in the descriptions, room or otherwise. Missed opportunities abound. The regional data is great, describing the valley well in terms that makes you think “wow, I wonder how that’s going to used?” Short answer: it’s not going to be. The party is led directly to the shrine. Swearing an oath on the oath ridge, or visiting the standing stone graveyard or exploring the fence in the goat fields … no reason to do it. There’s about a 99% chance none of that will ever come up. It’s just wasted space instead of the village/adventure being written in a way to take advantage of them. L*A*M*E Instead it’s just one more bit of included lame ass long boring backstory that will never be gamed. “Mika the centaur hasn’t been comfortable expressing her authority until recently.” Great. WHy the fuck does that matter when the party comes calling?

Read aloud is almost always useless and boring, not evocative at all. There’s an exception or two, like the narrow crevice entrance to the shrine. Tumbled boulders split by a narrow crevice with a dim blue light coming from deep within, or some such. Bit most of it is just boring description, in blue italics on a blue background that contributes to it being hard to read.

Lots of room history that is meaningless and then one important room that doesn’t mention the undead monster or the the dead bodies in it. The bodies are central to the conflict in the village, but THAT room doesn’t get a read aloud or much mention of the undead except for stats. In spite of the events being a major hook in the adventure. Instead we get things like “the doorway leads to room 4.” You mean, exactly like the map shows us? Good thing you wasted all that space and distracted us from the important shit in the room, making it harder to find it.

And the map … it’s linear for no fucking reason at all. Just walk in a spiral and have encounters/experience rooms. There’s absolutely no reason for it. Both the undead attacking the village and the search for the artifact are more than enough reasons to explore the place and yet the party is led around by the fucking nose. Why the hell would this choice be made?

And much of the publisher intro is just wrong. It talks about hyperlinks … of which there are none as far as I can tell. And it talks about product branding, so you can know which products are supplemental to adventure paths … which this is … and whose branding is not present on the cover as the text says it should be. “When you see the “Adventure Path Plug-In” logo at the top of a Legendary Games product …” Guess what’s not at the top of the product?

This isn’t nearly as bad as I thought it was going to be. The region is interesting, though unused. The village dynamics and interactivity were both pleasant surprises. And there was NOT the usual Stat Bloat, at least not an extent that I expected. Not just a hack-fest, this adventure makes sense. A highlighter could make it useable. The descriptions need to be more evocative and the trivia bloat needs to be taken care of, with the region integrated better. That would make this a decent adventure, even by the higher OSR standards.

This is $6 at DriveThru. The preview is six pages and tells you nothing, just showing you the (wrong) publisher intro and a bunch of boring as fuck backstory. Show the fucking content so we can make an informed purchasing decision!https://www.drivethrurpg.com/product/223357/The-Horseshoe-Calamity?affiliate_id=1892600