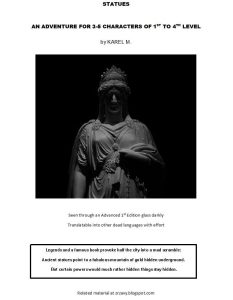 Legends of a “mountain of gold” provoke a mad scramble for a mysterious book laden with clues to find certain statues around the city, which themselves hold additional clues leading to the hiding place of the fabulous treasure.

This is a 39 page urban adventure, a treasure hunt in a city mad with treasure lust, with the last 18 pages being appendices, handouts, etc. Care has been paid to orient the adventure to the DM, helping them to run it effectively. Reference tables, organization, great wandering content and a focus on gameable detail all push this above average. I like urban adventures and I think this one gives the DM things to work with.

There’s a Mad Mad Mad Mad World vibe to this adventure. The tavern the party is in is abuzz, everyone excited, just like half the city, about the rumors of THE TREASURE. Rumors lead to a search for a book with a map/clues, and then a hunt to decipher them and find the statues that, together, reveal the location of the treasure, it’s vault being the last of the adventure. There’s a social intro, with the rumors and hunt for information about the treasure, which evolves in to a caper as the party tries to break in to one of the map/clue book locations, which evolves in to deciphering puzzles and negotiating a city half full of treasure-nutters. This then evolves in to a brief exploration of a great cistern and a mini-dungeon … that evolves in to consequences and cleanup as the party has to decide what to do with the treasure. That’s a lot of variety and that helps, I think, with designing a convincing city adventure. It’s not just one thing, it’s many, just like the city. Too often a city adventure is just “talk to people then fight in the warehouse/sewers.” This thing has dimensions.

The wandering table is a part of that and helps make the city a proper part of the adventure. A page of daytime and another of nighttime encounters makes give a decent amount of variety. Best of all, the encounters are oriented towards the adventure. There was some Dungeon adventure, a WIllie Walsh one I think, about a village of scribes tearing itself apart over the invention of a metal quill nib. Everyone you ran in to had an opinion … even, if you spoke with animals, a hedgehog. That’s what I mean by content oriented toward the adventure. In this case almost all of the encounters have something to do with the treasure hunt. Treasure hunters of all variety and people who know something about the legends. The city watch patrol like company to walk and talk, 70% of them know the legend, 10% know book clues and are gregarious fellows. To hire when their shift ends at sunset, perhaps? The orientation of the wandering monster encounters is focused ON THE PLAY AT THE TABLE. It’s not just random garbage that was pulled at random from a table in a DMG. This is value add. The extra detail on the walk & talk of the city guard. The orientation towards WHAT THE PLAYERS GIVE A SHIT ABOUT.

Those wanderers appear on two tables, a day and night table, that each take up a full page. This SCREAMS reference sheet. Print it out, two-sided, and you have a reference sheet available at all times for spicing up the partis travels and encounters in the city. Likewise I want to talk about the reference table for the rumors.

After a terse into of one column, the party starts at night under a portico at a courtyard wine bar. It’s loud, everyone is abuzz with dozens of people talking excitedly about something. That’s a good set up. It’s easy to imagine. What follows is a table of twelve entries that describes some of the people you can talk to. One group per line, with each line broken in to three columns. There’s a quick “who” column, that gives a brief appearance, first impressions for the DM to look at and consult. Then there’s a bit more information in the second column, about what the people talk about initially. Ice breakers and surface conversations, if you will. Finally there’s a longer third column that describes what they really know if you hang around and interact with them deeply, spending time talking, buying food/drinks, etc. From this the party learns the initial rumors as well as teasers for where to learn more information. That leads, in some cases, to the capers to steal books, maps, etc. The table is oriented to the DM and to the meaningful play at hand … the rumors and search for information.

Eventually, after perhaps a caper (again, the data about the caper locations are oriented towards what the party probably wants to know in order to break in/acquire the books.) it becomes a hunt to determine which of the myriad statues in the city is referenced in which clues in the book. The statues, again, are oriented toward actual play. We know from the first sentence where the statue is and then what it looks like and its role in the city, and then any complications with the statue are explored. One is covered in handbills and woe to be and murder hobo fucking with it … a mob ready to “defend free criticism” is ready to descend! Some are in private courtyards, one in a tomb. There’s are all little mini-adventure encounters all with the potential to spawn those zany player character plans that make D&D so great.

The little art pieces (from the web?) provide good inspirations. There are 3d outlines of houses for those scaling walls, and a myriad of other little small details that make the adventure easy to run and flavorful.

This is $5 at DriveThru. The preview is six pages long. You get to see the rumor table and the wandering table, both of which give you a good idea of their use as reference tables and the general vibe of the adventure, complications, and flavor.
https://www.drivethrurpg.com/product/225559/Statues?affiliate_id=1892600