Mistress of the Ghost City 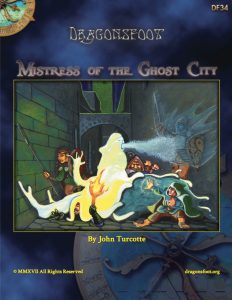 This fifty page adventure in an evil fortress is part four of the series that include Fallen Jarls, Towen, and Stormcrows. The last third are appendices, so you’ve got about thirty pages describing about eighty rooms/ over five levels in the fortress.

The snows are melting and the northern clans have rallied to turn back Her Dark Majesties forces. The party is sent to her fortress to kill her once and for all.

This tends to the minimally keyed side of the spectrum, with brief bursts of longer room descriptions. You can think of it as a little room description and then a longer “how the monster interacts” added on … with a lot of variety in that generalization. A two sentence room and a one page room are also featured. The descriptive style could be described as baroque or gothic, with word choice and sentence structure giving it a slightly off kilter vibe. It works well to help get you in to the “fortress in Hell” mindset. As with the previous modules in the series, illusions, both for places and for monsters/devils, are used to great effect to provide variety, mystery, and the horror of the unknown. “Bob the barned devil likes to hand out as a nude man with the head of a cuttlefish.” Well, ok. Don’t see that everyday. Likewise every banquet feast is offal and every majestic visage something else. Likewise a skeleton hunched over with a candelabra on its back, the only light illuminating a great hall. Illusion.

The encounters make the place FEEL like hell. (And … that’s what this is, a fortress that teleports between the prime plane and Dis.) Gardens full of beautiful flowers … that you can use to make poison. A great bell that tolls thirteen times at midnight. Rooms that dim your light and magic mirrors that summon a minor death that only the mirror-user can see. The adventure is full of weird little non-book things, illusions and effects, that make the place feel like a weird ass fortress in Hell.

The bell also serves as a nice entry mechanism to the fortress. After an overland journey (just some “normal” wandering tables) you see the ghostly fortress. At midnight a bell rings thirteen times and it fully materializes, until dawn arrives, giving you a window to enter and leave. That’s a great “enter the mythic underworld” transition to the dungeon.

These “evil fortress” adventures are, I think, hard to do, and I don’t think Turcotte has cracked the code. They need to feel cohesive and alive, and I don’t think this one does. It almost feels like little vignettes. He addresses several of the issues with evil fortresses by simply noting that Hell Is Weird, and the devils know that, so the mere fact the party is in the fortress doesn’t mean an full on alert.

But things feel disconnected at times. That great garden has a room with a gardener. “The gardener, a red abishai devil (HP: 16) dwells here. It appears as a tortoise-like humanoid with an impressive moustache. It has no treasure.” What’s the point of this? We know that they don’t immediately attack … but the encounter goes nowhere. What’s the gameable action this enables? Is he proud of the garden? Resentful? It is, essentially, minimally keyed.

The kennelmaster is another good example of this. “The kennelmster lives here. He looks like X.” and then a long paragraph on how he attacks. And yet other things in the adventure fit in so well. A guy at the front desk takes your names. If you read the book then clerics and mages get a certain bonus, since they now know so much about demons/devils from it. It fits perfectly.

I’m grasping for how to summarize this. There’s a minimally-described overland journey, and the same through a ruined city, with only the main fortress keyed. The fortress has great window dressing and great things to mess with. In spite of that I think it is still on the minimally keyed side of things. There’s just not that little extra to shove the DM’s brain over the edge in to ACTION.

“A pair of dead trees stand sentry on either side of the short passage leading to these doors, their withered branches intertwining to form a high-roofed tunnel of sorts. Weird garlands of iron wire, hooks, teeth and pins hang on the trees, numerous small bones dangling from the hooks and barbs. Beyond, the heavy doors are constructed of bronze and depict endish faces leering from wreaths of bas-relief owers. A flickering red candle is set into a small recess wall beside each portal.”

Great description! Now what? This is one of the best “evil fortress in hell” I’ve seen. The window dressing is excellent, if a bit long in places. But it feels like it lacks potential energy.

This is available, free, at Dragonsfoot.

4 Responses to Mistress of the Ghost City