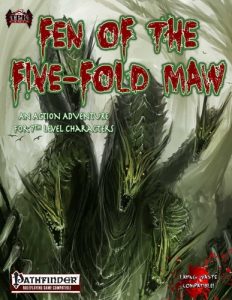 … delve deep into the Sorrowfen, an ancient swamp infested with lizardmen who have suddenly risen to threaten the beleaguered nearby village of Wyverglynn. The village needs aid from a aged witch that lives deep in the swamps and sends the heroes to seek her out. But will the swamp devour them before they can come to the aid of Wyverglynn, or will the fervored tribe of lizardmen within flay them alive?

ONE HUNDRED PAGES. FOR TEN LINEAR ENCOUNTERS. Words cannot describe the feeling in my stomach. THIS is what D&D means to people?

You go to a village in a swamp on some pretext. The villagers are having trouble and send you a witch in the swamp. From there you go to see a lizardman tribe who, of course, are now evil. You fight a big hydra-thing and then get chased back to the village, using chase rules.

So, yeah, obviously it’s overly verbose. Lone read-aloud. Long DM text. Mega long stat blocks. Lots of backstory and history that are irrelevant. The first encounter, an ambush on the road, takes seven pages. For a simple combat with some lizardmen and their pet frogomoth.

Getting to the village, the gates are closed and you need to roll to talk your way in. Roll badly enough and the guards attack you. A town guard attack is not automatically bad, but, in the content, it is. It’s a Roll To Continue. You MUST make your rolls in order to be let in to town and continue the adventure. Without success on a die roll the adventure is over before it begins.

It has some good ideas. The town guard not letting you in someplace is good. Making it a blocker isn’t. After all the party is 7th level and has considerable magicks at their disposal to turn this in to a fun exercise in working around the gate guards. There’s the potential for a GIANT maxx combat at the end, with at least a hundred lizardmen. This is the pretext for the chase; getting away from them. But … what if they were 1hd or 2hd lizardmen? Then it could be written as a pitched battle, letting the party stretch their legs instead of a bludgeon used to force a linear chase scene.

The party is sent by the village to go talk to the swamp witch. Turns out she’s a disguised hag. Sometimes she eats people in the swamp, but she also helps lost strangers and helps the village out. This is GREAT. Playing up that aspect would have been wonderful. It’s one of the reasons I like being able to talk to monsters in a dungeon, it presents another angle to play. Instead she’s obviously got a kidnapped girl in the hut and serves you a stew of fingers and toes. Well, duh, guess she’s evil, lets gack her. L.A.M.E. The town rumors are good also, in voice of the locals and fit in well. One of the hooks is also nice: someone in the party likes a beer and it not available anymore, you need to go the village to find out why. That’s a nice one to integrate in to play and is something to motivate a PLAYER. The other two, with a insane halfling and being hired are the usual dreck.

I just can’t get over how wordy this thing is. You can’t find anything in it, long stat blocks and meaningless text clog the thing up in a ridiculous manner.

This stinking pile is $10 on DriveThru. The preview is one of those “flip book” things, showing you the general page layout but nothing of the content. https://www.drivethrurpg.com/product/143829/The-Fen-of-the-FiveFold-Maw?affiliate_id=1892600

And at fucking $10/pop for crap-ass PDF’s I’m going to have to put up a donate button or Patreon. This fucking shit is getting ridiculous.