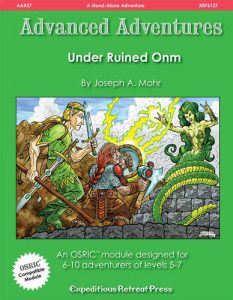 Nearly seventy five years ago the greatest bard ever known in the dry land of Zanzia disappeared. Anton Deangelo was a hero famous for some of the greatest songs in Zanzian history. In verse, countless dragons he slew, dozens of giants he felled, and hundreds of demons he put to the sword! Outside of the world of song, he and his band of adventurers gathered significant riches and looted many dungeons all over the land. Then suddenly…he was gone. The last time he was heard from he and his merry band were outfitting an expedition to explore the ruined city of Onm in search of the lost Mandolin of Duaree the Mad. The Onm ruins are on the edge of the Blood River and the Dragon Teeth Mountains and no other ruins fabled enough to attract Deangelo are known to be in that area.

This seventeen page adventure details a three-level dungeon with about fifty rooms in it. The maps are basic and the writing fact-based, but it is full of classic elements like rotating statues, fountains to drink from, and riddles. Workmanlike, is a good description.

That is, in a nutshell, the issue with this adventure. It tends to go on about the mundane without really telling you anything. If the ogres had a captive, or bargained, or almost ANY extra detail then the additional words would be worth it. But they don’t, and the words are just filler telling us nothing. A plague upon the industry, it is.

The dungeon, proper, is three levels. The creatures appear to live next door to each other, but in isolation. No factions, no how they got in to a room behind three other monsters. Look, I’m not searching for a fully blown dungeon ecology with entrances/exists, water, food, etc, I hate that stuff. But SOME design seems like it could be good?

Room 2 is “a large room with a 20’ ceiling. A pack of volts recently discovered a way in to the dungeon and taken up residence.” Well, that’s certainly evocative. A “large” room. Oh boy. The imagery runs rampant!

Most of the rooms in the dungeon are a combination of that ogre description and the volt room. A VERY basic room description and a very basic/generic monster description. There is sometimes a riddle or trick, like a rotating statue, or a treasure under a loose stone. Even those, I dare say, are not described very well.

But there ARE classic ideas present. Rotate a statue to point to a secret door to unlock it. A fountain you can drink from and a ghost king who can give you a wish. Great ideas! Implemented in a manner that is completely straightforward.

This is $14 on DriveThru. The preview is six pages. Most of it is the wandering monster tables but you do get to see room one and part of room two on the last page of the preview. ROom two is pretty typical, but a preview that showed one of the tricks would have been nice also, to get a feel for how the workmanlike writing translates in one of those rooms.https://www.drivethrurpg.com/product/221988/Advanced-Adventures-37-Under-Ruined-Onm?affiliate_id=1892600