The Lost Temple of Sharess 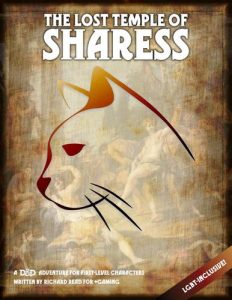 Beneath the home of a wealthy merchant named Haroun, a floor suddenly collapses, revealing the entrance to a deep, dark cavern. But judging from the screams and laughter coming from below, this is more than a common cave. Will you conquer the long-forgotten horrors it holds? Will you discover fabulous treasures in its pitch-black passageways? And most importantly: will you learn the merchant’s own secrets before it’s too late?

This 32 pages adventure details a sixteen room ancient temple found underneath someone’s basement. Mountains of read-aloud and DM text, each room being a page or more long, hide a basic dungeon with tricks, traps, and classic features.

The intro is 8 pages, describing useless backstory that will never come up during play. The read-aloud for each room is about two paragraphs long, followed by reams and reams of DM text. For room two this is a page and a half of DM text. This is way WAY too much. Players hate read-aloud. They hate monologues. They hate not being able to PLAY. Wasn’t there an article by WOTC that players lose interest after three sentences? Which is three times shorter than the read-aloud in the rooms in this.

Then there’s the DM text. Almost everything feels like padding. “As the players enter, this is what they see [read-aloud.] Really? Did you really need that? “The beetles are giant fire beetles.” We know, you’ve told us twice so far. An aside tell us “It might be fun to make the party guess what the liquid is, but in fact, it’s just water–holy water.” A paragraph is used to tell us that writing at the bottom of a basin has the name of the Sharess, the temple goddess. This happens a bajillion times in the adventure and HAS NOT IMPACT. Who the temple belongs to is irrelevant, the information is never needed. And even if it were we don’t need to be told multiple times OR the explanation to take a paragraph.

More is not better. More gets in the way of the DM. The goal is to communicate information evocatively and effectively to a DM scanning the text as the players walk in to the room. Data like “once there was a statue here, but it was removed” is just useless trivia that makes things harder for the DM to run the adventure.

Which is too bad because it’s not altogether a terrible adventure. Each room has a little mini-map at the top. The basic guts have things like two NPC’s hiding from the monsters and who will join your group if you find them, or a holy water basin, or skeletons in a sarcophagus that will animate, with the sarcophagus in a alcove. Bodies in the bottom of a pit trap. There are A LOT of good elements present to work with … but it feels like the text is fighting you tooth and nail to figure out what’s going on, simply because of the wordiness.

This thing needs a HARD edit, getting rid of almost 2/3rd’s of the words. The remaining text would then be relevant to the adventure and easy to focus on, as the DM. Then you’d have a basic dungeon exploration.

This is PWYW on DriveThu, with the price currently at $4. The preview is about six pages long, and the last page shows you the first page of the 1.5 page long “room 2.” It’s a good representative example of the type of writing in the adventure.https://www.drivethrurpg.com/product/222836/The-Lost-Temple-of-Sharess?affiliate_id=1892600

1 Response to The Lost Temple of Sharess