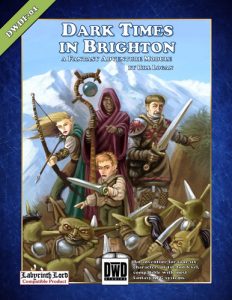 Townsfolk are disappearing from the surrounding countryside. Goblins are on the march once more. If that wasn’t enough, a terrible blighting disease has infected the waters and not even the curative magics of the Temple of the Winds can thwart it. This is indeed a very dark time for Brighton.

This 54 page adventure details a 21 room goblin lair in an old dwarven hall, along with town nearby. Nice motivations/background and DM advice lead to a journeyman effort with the encounters and the writing being LONG. Too long & focused for me.

The town patrol wandered too far and found a goblin lair. Some killed, some captured, some escaped, the survivors come back, and have brought a disease. A rescue patrol didn’t return at all. Riders have been sent out seeking help. The first group to respond were greedy and disruptable. Your party is the second. That’s the background, which is actually pretty good. It also sets up the action for an evil NPC party hanging around, their rumors, and eventually encountering them in addition to the goblin band in its hold.

The adventure has a a bit of “young adults/children” bend to it, with situations that are clear moral choices and allows kids to be the heroes they know from the tropes they’ve seen. I generally abhor the morality of adventures, but I can certainly see a place for it in adventures for certain audiences. Further, the adventure does a decent job of providing DM notes in sidebars, to explain what it’s doing things and how to modify the adventure … like making it less kid friendly. “The party might decline because the village has plague, if so you could try …” is good DM advice.

The village has some nice rumors and a number of small (VERY small) side quests, and there’s a short wandering table in the wilderness to get to the goblin lair. The rumors could be better, but they do deal with actual information in the adventure. The encounters in the lair fall in to the pretty standard territory. It’s more than “goblin guardroom with 4 goblins.” There’s an evil temple, a throne rooms, guard rooms, slave pens, torture chamber, and all that you would expect. There’s also just a LITTLE bit more. The goblin guards are bullying another goblin … whoc them helps you if you save him, telling you where some traps and treasure are. That’s a good example of both the moral bend (I’m sure the kid players would stand up to bullies) as well as providing more dynamism to the encounter and NPCs to interact with the dungeon, and this dungeon hits that multiple times. Good journeyman-level encounters.

Where it fails is in the wordsmithing. While the ideas are decent the communication style is LONG. And a little bland. The initial read-aloud is about a page long. The town building descriptions are full of trivia that clog up the descriptions without being directed toward actual play. History, descriptions, unfocused writing … they turn the town entries in to a wall of text in which nothing stands out and anything that DOES impact play is hidden. This continues in to the dungeon room descriptions, with long read-alouds that are not particularly evocative and then lots of DM text, turning each room in to almost a column of text.

Interesting, because it DOES do good things in places with formatting/style. That long intro text I mentioned? It’s followed by a couple of bullet points with the key facts for DM’s that want terse facts to run it THEIR way. PERFECT. It also does a great job of selecting a format for the monsters that makes it easy to see their stats. A little lengthy, but its clear that some attention was paid to that. The random DM advice note boxes that appear in the text are another example … someone thought about things and found a way to address it. But the MAIN text. The actual text, is unfocused and doesn’t appear to have the same attention paid to it. It’s hard to scan, it’s conversational, difficult to run at the table. You need to be able to scan the text quickly, requiring focused writing with evocative descriptions rather than trivia.

The encounters are ok, but the writing & formatting are not up to snuff. Bill’s work is not beyond hope if he improves his writing.

This is $13 at DriveThru. The preview is five pages long and is all “overview” and DM reference, not really a view in to the encounters or descriptions at all.https://www.drivethrurpg.com/product/95757/Dark-Times-in-Brighton?affiliate_id=1892600

3 Responses to Dark Times in Brighton