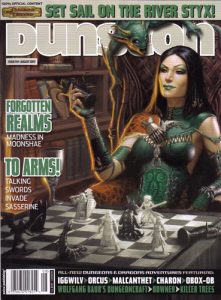 Not as bad as I was expecting for issue 149. Nice ideas, poorly implemented.

War of the Wielded
By Richard Pett
Level 5

Well, you don’t see that everyday. I tend to like things stretched to their logical conclusion, or at least I’m morbidly fascinated by it, and this adventure does that. A world with intelligent swords that can ego-overwhelm people? Ok, let’s see where that goes … Two groups of intelligent swords, with conflicting goals, are engaged in a kind of war. The party stumbles on a dead body and one of the swords. ENcouraged by a magic sword, and told of where to find more, they are encouraged by the sword to go rescue his “friends” … the other swords on his side. This leads to a fight in a bathhouse, capturing a rust monster, and destroying all of the magic swords with it. It’s linear, but the setup of magic swords engaged in a “war” with each other is a good one. You meet someone after the first encounter who wants you to destroy all the swords and it’s simply a given that the party will … but this comes out of nowhere. There’s no real motivation, horrific acts, etc, to motivate the party to give up a bunch of magic swords. It’s just the next stop on the railroad. It plays out more like a series of set-pieces with token roleplay to tie things together, and that’s never good. There’s a decent idea here; it needs to be given more room to breathe, with fewer descriptions of ordinary rooms. In particular, the hooks appeal to the PLAYERS, but tempting them with magic swords. Nice job that.

I’m not sure about this one. There’s an abandoned village with a mad dude in jail and a boy under a boat, neither of whom know what happened to the villagers. There’s a sullen, forlorn vibe that I can dig. You eventually find out a tree monster signs after dark, luring people to their doom … which in this case meant slavers. But the slaves are still dying and the only way to save them is killing the plant monster. Good imagery with ogres skinning and hanging meat, the initial village, a drunk satyr, and, of course, the potential for pirate/slaver allies. It’s also very … encountery? Ogres in the village. A centaur slaver on a hill. Pirates on the shore. It all just feels like there’s monsters there BECAUSE. Still, nice adventure concept and some good imagery. It’s just needs a rework.

Enemies of My Enemy
By Wolfgang Baur
Level 19

Meet Charon and journey the Styx picking up allies to attack Demogorgon. Lots of words. Lots of forced combats and “testing skills” and meaningless read-aloud. There’s some decent roleplay in this, in negotiating the various creatures/scenarios of the planes and recruiting demonic allies, but it’s buried in a horrid page count from stat blocks and overworked “aren’t I clever!” text. It’s feel formulaic and repetitive.