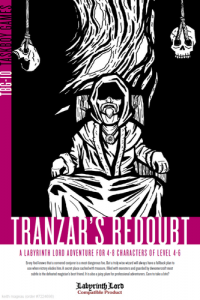 Every fool knows that a cornered conjurer is a most dangerous foe. But a truly wise wizard will always have a fallback plan to use when victory eludes him. A secret place cached with treasure, filled with monsters and guarded by dweomercraft most subtle is the defeated magician’s best friend. It is also a juicy plum for professional adventurers. Care to take a bite?

This 44 page digest adventure describes a twenty room dungeon in about twenty pages, with the rest being monsters, magic items, preg-gens, etc. It’s mostly a linear dungeon with a few branching rooms. I’d call this a funhouse dungeon, with iconic adventure tropes appearing in many of the rooms. It’s got some layout issues, gets long/redundant in places, and generally has bits and pieces of decent descriptions. If the layout/map/etc issues were resolved then I’d say this is one good edit away from being a pretty decent funhouse adventure.

Fair warning: I have a fondness for the classics. Waterfalls need a cave behind them, etc, and this adventure has that in spades. There’s a room with statues that ask riddles. There’s a dragon on a treasure pile that you can talk to. There are damsels on a rock in an underground lake. There’s an etting in a room with three magic fountains. A large mushroom forms a mouth to issue a warning. At times this is a like a who’s who of classic D&D room types.

The rooms have some decent imagery associated with them. A door with an evil fetish of chicken bones, feathers, and a ruddy brown stain. Nice! Odious vines. Statues illuminated with blue light from within. A statue face on a wall of a desiccated zombie with a mouth distorted into a rictus of hunger. These are pretty good descriptions. They get an image across to the DM immediately and these sorts of descriptions are not uncommon in the adventure. “Large” pods is not very descriptive. A common issue with much adventure writing is resorting to these common adjectives and adverbs. Large and big are both boring words. EVen if you don’t go full on Jabberwocky there’s always a thesaurus.

But these descriptions also tend to be buried in the text. “Stairs descend for about 20’ into a 40’ passageway ending in a door. The door is locked. Normal lock picking rules apply.” I wonder if normal combat rules also apply in combat? And it’s somewhat remiss to not tell us that normal gravity rules apply? It’s IS useful to know the room dimensions, since, you know, they are also right there on the map that we just looked at to get the room numbers, etc. You know, the central piece of information for all DM’s that’s almost always the centerpiece of the reference material they use. Oh, wait …. NOT useful. That’s right. REDUNDANT. It’s this redundancy, on both counts, that drives me crazy, especially with an adventure like this that is close to being acceptable.

The number one rule in adventures, published ones anyway, is that they are technical document, a reference for the DM. The implications of that statement will vary based on the type of adventure what section of the adventure, but it always needs to be on the designer’s mind. For room keys there needs to (ALMOST always) be a focus. What’s the DM need to know first? Usually this is the description; the short and evocative text that shoves an idea seed in to the DM’s head where it can grow and flourish and they can then ad-lib and fill in for the rest of the room. It’s. Not. The. Fucking. Room. Dimensions. First, it’s on the map. The map that’s almost always in front of the DM. No, putting it in the key is not good. More is not better. It distracts from the DMs attention. Suddenly there is trivia, useless information, that I must dig through in order to get to the stuff I NEED to run the room. I’m hot on overloading the map with detail because of this; it’s always there and can support a lot of the mundane needs of the DM without detracting from the evocative part of the room. Give me a terse and evocative room description then another paragraph of a couple of sentences that follows up on it. You don’t need tons of mechanics. You don’t need to spell everything out. You’ve got a DM there. Allude to things. Give the DM room to blossom.

I’m being overly harsh on Joe, the designer. This isn’t garbage, he does have some good descriptions and room ideas (and good magic items, for that matter), it’s just clogged up with the mistakes I’ve seen hundreds of times before. The difference here is that those adventures generally had few redeeming qualities, unlike some of Joes descriptions and room ideas. I feel like Joe is close. Take a room. Work it. Rewrite it. Focus. Have the magic click.

I’m also more than a little annoyed that the map is split over two pages in the (middle) of the book. I don’t know, I guess it’s digest sized and that takes some allowance, but I find those hard to read, and reference in play, and print out/photocopy for my DM screen. No, I don’t have solution. I’m just a jerk that way.

This is $2 on DriveThru. The preview is six pages, but it’s all intro stuff. I wish these previews would more often show you an example of the technical writing.https://www.drivethrurpg.com/product/148906/Tranzars-Redoubt?affiliate_id=1892600

Finally, there’s a thread over at RPGGEEK where they are building a community dungeon. I’ve been critiquing their rooms. One of them, username=PurpleBrocoli, had a kind of meandering writing style that they cleaned up quite a bit and turned in something that meets my approval. Several others are rewriting their rooms also, and I do in to detail on most of the rooms, noting the trivia and so on.