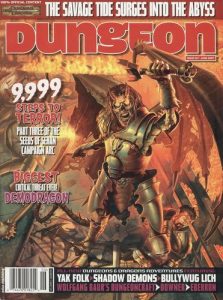 Holy shit! A sandbox! I’m not kidding, a real sandbox! In a late issue dungeon! It’s a bank heist. An exorcist wants a possessed amulet from a bank vault, so he can banish the demon in it, but the bankers have their rules and he ain’t got the password. No one is evil! Try THAT one on for once! There’s a bit of the ol magical society bullshit, with skylights held in place with sovereign glue and permanent whispering wind spell intercom systems. Without that stuff, and changing the place from a bank to “Karl the moneylender” and you’ve have more standard fantasy world adventure. There’s a corrupt clerk you can give you information on the maps, the guard rotations, security procedures, and so on. Then, it’s just game fucking on! Come up with a crazy plan and go to town, the essence of great D&D! It IS laid out incorrectly, using room/key format. This means that the security procedures, like the bears that roam the compound and guard posts, have long descriptions about how they work. Other rooms, like a shower room, have very terse ones. “With a handle that dumps cold water when pulled.” That’s about the most that’s appropriate for a shower room, in a caper adventure. The “big picture” details of the security and procedures should have been pulled out in general sections and then a terse room/key presented, with the two referencing each other. I don’t want to dig for information about the patrolling animals by trying to find the correct room with the info. Put it in “night patrols” section and reference room 4 as their pen, with room 4 referencing the night patrols section, noting it’s the home of the patrolling animals. With a rewrite this could be an ok adventure!

Dread Pagoda of the Inscrutable Ones
By: A shiton of people
Level 10

Part three, the final part of the Seeds of Sehan adventure path. Starts with an auto-ambush, no doubt “to get the players going for the night!” and follows with some yak-folk probably attacking in a forest. Then there’s a thirty room dungeon/pagoda to infiltrate/hack through so you can kill the last remnants of the Sehan entity. It’s all janni and room/key, and not even a brain in a jar can save it. It’s the strongest in the series thanks to its bluff/infiltrate basis, but digging through this to run it and understand what’s going on is a chore.

Into the Maw
By Robert J. Schwald
Level 17

Part none of the twelve part Savage Tide adventure path. You take your boat in to an abyss ocean, to a prison, to do a jail break. With a bullywug lich. All of the prisoners are either hostile or indifferent. That’s right Mr Angel-held-captive-in-an-abyss-prison is, at best, indifferent to the people freeing him. It claims to have factions, but since they all attack it’s really just some theming to the different areas. It’s just a fucking hack.