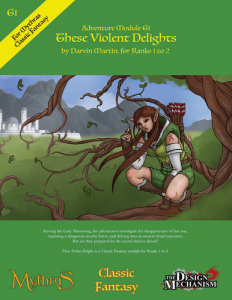 When the son of an elven noblewoman goes missing, the characters are recruited by the Lady Nuathyn to find him, leading the party from the town of Gramby and into the mysteries of Grune Vel Wood. Is everything as it seems? And how will the characters cope with the moral choices ahead…

This 36 page adventure features a fourteen room dungeon after a small wilderness section. A son is missing and the party hired to find him, only to be faced with a “moral” decision at the end. It has some decently interactive room details but also goes in to to much history and backstory, leading to ¾ column rooms with long paragraphs full of meaningless trivia.

The sins are many, but let’s cover the decent parts first. Imagine the DM saying “the room has a mural on the wall.” What is it, you ask? “A mythic figure, king of the forest, Daren O’Reily, holding the sun in his left hand.” Anything else? You look closer? “The sun is covered in soot.” Something close to this is, I think, a great way to cover room secrets. The DM is providing hints and players picking up on it ask some follow ups and the secret is revealed: placing a fire up against the sun opens a secret door in the wall. This adventure doesn’t lead you to that interaction, that’s up to the DM, but it does provide the environment, in many rooms, that an interaction like this can take place … even if it take four fucking paragraphs to get to it. Secret doors outlined in fire if the players fill a channel with oil; it smells faintly of it. Swirling clouds of dust in rooms, or strange whistling sounds with normal explanations. I’m fond of this sort of secret, and have been since those holes in the wall in the DMG dungeon had bits of wood in them. This adventure provides that in several of the rooms. It’s an exploratory and interactive style of D&D.

There’s another nice social interaction encounter in the adventure which I think is a pretty good way to handle social rolls. While asking questions around town you could fail your roll. This doesn’t mean you don’t get information, but rather SOMETHING HAPPENS. This isn’t a “you get no information” fail, or a “not very good information” fail, but rather a fail that leads to more adventure. In this case, a drunk berserker trades blows with you. Then, if you do well against her, you might be able to recruit her! A die roll doesn’t lead to a boring fail/miss, but rather is used as springboard to MORE. More adventure. More complications … and not necessarily bad!

There’s also about a column of text in the beginning that outlines the NPC as well as the key points and timeline of the adventure. It tells you almost nothing interesting or important about the adventure, but I appreciate the style and I think bullet point style is a great way to present summary information to the DM.

And on the negative side: this adventure should be at least half as many pages as it is, and probably shorter than that. It is FULL of trivia. History. Backstory. Useless words. “The fireplace has ashes and the remains of charred wood it but nothing of interest.”

How about the price of tea in China? That has as much business as being in this adventure as does the empty fireplace description. How about some backstory about a wizard who tried to take over the dungeon and fell in love with a dryad and created some undead to guard some of the rooms? All so you can justify having a couple of skeletons in the fucking dungeon. YOU DONT NEED TO EXPLAIN THIS SHIT. Maybe it happened that way. Maybe the dryad created them. Maybe not. But it’s ONLY fucking relevant if its actually fucking relevant to something that’s going to happen in the adventure. If there’s no way for the players to exploit it, or it doesn’t add to the evocative nature of the description, then leave it the FUCK out! All you are doing is clogging up the fucking text and making it harder to find the information that IS relevant.

Bad read aloud introduction to the town that’s boring & generic. A page and a half meet & greet to get your assignment that falls in to the “exact dialog” trap, telling us our hostess wipes her wipes with a silk handkerchief and says “Thanks you for honoring my summons …” Ahhh, go fuck yourself. That’s the way YOU ran the intro. Your job, as the designer, is to provide the DM enough information to run it, hopefully in an evocative manner, in the shortest way possible. Maybe they will run it the way you did. Maybe not. Make a roll to find the secret grover so you can continue the adventure. Make a roll to find the secret door so the adventure can continue. These are terrible terrible design decisions, not to mention the traces of morality preaching. Leave the bear cubs you find to die in the forest or take them to town to sell? Well, I mean, not if you’re lawful or good, sez the dungeon. I guess logging is officially evil now also? Room dimensions in room descriptions, the list goes on and on.

The big morality play at the end is that the missing son is in love with a dryad, when you track them both down together at the end. Then some half-orcs, hired by the elf noblewoman, show up to kill the dryad. Do you help your explorers retainers, the half-orcs, or the lovers?

This is $3.75 at DriveThru. The preview is the first four pages. It doesn’t really show you anything other than the bullet point summary … which, while a good idea, doesn’t summarize the CORRECT things.https://www.drivethrurpg.com/product/213797/G1-These-Violent-Delights?affiliate_id=1892600

2 Responses to These Violent Delights