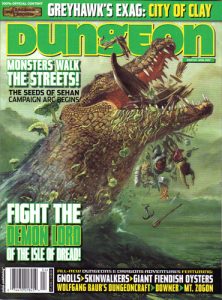 The Distraction
By Tim Hitchcock
Level 3

This is an excellent example of shitty-ass modern D&D adventure design … uh, where ‘modern’ is defined as ‘2007.’ A wilderness outpost is about to be attacked by a gnoll army. The party is tasked with getting behind them and disrupting their cattle to delay them until reinforcements arrive. When I read the synopsis I thought ‘Great! Cool sandbox!’ and then I recalled it was Dungeon and surmised it was probably a linear adventure full of set-piece encounters. Just follow the line of set pieces and arrive at the inevitable destination. The DM tells a story, “and then, and then, there’s this ettercap that stalks the trails and he’s wiped out a fortress and then and then …” I loathe this. The story belongs to the players. It’s too bad, because outposts in the badlands, heading em off at the pass, a haunted forest ala Blair Witch … it’s got great theme ideas that just get crushed by linear shit-fest. WHich is then combined with MONSTROUS amounts of text. We get a paragraph describing a tattoo on the back of the hands of some of the soldiers WHICH HAS NO IMPACT ON THE ADVENTURE. The map uses a cursive font, ensuring it’s fucking hard to read. I mean, you don’t need it, it’s just a linear adventure after all. The haunted forest actually has twig blights in it. “Up ahead, a dark shape resolves into the gutted body of a gnoll, crucified within the thorny branches of a large tree, its cocked head leers down with empty eye sockets.” That’s the entirety of our haunted forest. It’s not a great description AND its not enough to do a haunted forest justice. This alone could be expanded upon to create a fab adventure. In fact, the entire idea needs to be harvested and reworked in to a longer sandbox. The concept here is good … if you can stomach the linearity and have a highlighter and are willing to work hard to run someone else’s adventure.

Part one of a three part adventure path “Seeds of Seehan.” Spriggan drug dealers, says the introduction. Fucking Eberron, sez me. But no, it’s Greyhawk, I think. And it has sewers. I can’t do it. I can’t review another sewer adventure. Oh world, I have failed thee. My only charge and I have failed. I just can’t. Pretext to get you in to the sewers and then SEWER DUNGEON. The map does appear to have pools and bridges, so at least there are some tactical options. In the sewers. Spriggan drug dealers in greyhawk sewers. Tonally, D&D is dead.

Part whatever of the Savage Tide adventure path.Six pages. It takes SIX. FUCKING. PAGES. To describe a friendly village with nothing going on in it except some disguised monsters attack. SIX. FUCKING. PAGES. An empty village with some couatl’s vomiting exposition only takes a single page, for Tarvinsts sake. I’m not even sure why anyone bothers, the fucking island in the middle of the lake is going to be where everyones attention is, for good reason. It has the 40 room near-linear crawl that has you fighting demogorgon at the end.