Perils of the Sunken City 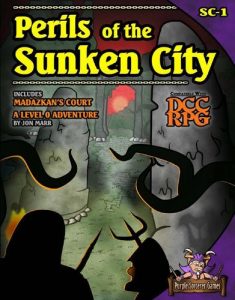 The Great City is old and faded, a pale reflection of its former glory. Life is a challenge for most, but for the weak and unconnected, the city is a place of unrelenting hardship harboring neither hope nor promise of escape. With one exception: the Sunken City. Most find death in the crumbling ruins that stretch beyond sight into the mists; once rich districts now claimed by swamp and dark denizens. But for the desperate few, the ruins offer treasures the Great City denies them: fortune, glory, and a fighting chance!

This seventeen page funnel has about thirteen to twenty encounters areas and a small starting locale. It has a writing style that, while not terse, does an excellent job of communicating the flavor of the encounter. This is combined with a layout style that makes the mechanics of areas easy to find. There’s a good mix of encounter types, from mundane to undead to weird, with a couple of the encounters being truly excellent pieces of design. I dub thee “Easy to Run!” … if a bit bland in some of the corners.

The publisher’s blurb does a decent job of introducing the scene: a great city, overtaken by the swamp. On it’s edge is a small settlement from which scum (IE: adventurers) set forth. Condemned criminals seeking pardon, apprentices, etc, all form up small bands and head off. It’s an environment that appeals to me, the small insular murder hobo community with its own culture. Purple Jon does a good job here of communicating the culture of the place and it’s the first example of a descriptive style that’s rare … and very good.

I’m fond of quoting a section from Spawning Grounds of the Crab-Men, a room that has an ld retired hill giant named Old Bay. He’ll pay for dead crabs and his cave smells of butter. The room is a couple of paragraphs long but if you read it ONCE then you’ve got the vibe and can run it from memory. It’s sticky. I talk a lot about terseness in descriptive style, all for the purpose of helping the DM run the thing at the table. The ying to that yang is sticky. You don’t have to be terse if you can be sticky. That’s dangerous territory though since EVERYTHING is likely to be sticky to the designer. But when it happens it’s great to behold. This adventure is sticky.

The little outpost of murder hobos can be read once. The little section on the approach to the sunken city, with six or seven locales, can be read once. The four or so outside encounters can be read once. The main aboveground encounter can be read once. It all stays with you, at least enough so that when you look at the map you can recall it. This is all supported by the layout and formatting which makes it easy to find the mechanical bits. “Oh yeah, that’s the room with the tentacles that do weird stuff … “ and in the text the bullet format and bolding makes finding that “weird stuff” trivial to locate. The writing did an excellent job of giving me the vibe while the layout & formatting did an excellent job of making the mechanics & specifics easy to find. IE: It supported the DM, exactly what it’s supposed to do.

I want to focus on one encounter as an example of good encounter design. It’s one of the best in the adventure and I think many could learn from it. There’s a grotto underground. The witter glitters with glowing scarlet crayfish (window dressing.) There’s an island out in the middle … with something sparkling on it. You see a massive shadow swim under the water. TEXTBOOK tease. Everybody, from the DM to the players, knows that fucking water is a deathtrap … and yet … what’s that sparkle? It’s the kind of shit that makes players eyes light up. Wacky plans ensue. D&D is played. The treasure is a real treasure, not a rip off DM screw job. There are some things around … stalactites, giant braziers that could be boats … This is GREAT design and, again, once read it stays you and the mechanics of the treasure and monster and so on are easy to pull out of the (column) of text.

That room does something else, it provides some unexplained stuff, a mystery, about the monster. This happens routinely in the adventure; things are introduced that have a mystery to them. A giant ‘Warden’ who stalks the entry. A demon in a pillar that teleports. It’s not missing information, its writing in such a way that DOESN’T explain, but at best just hints at, letting the DM run with things and expand as need be. This is the kind of writing that fires the imagination.

The maps are clear with just enough art to contribute to helping the DM recall the rooms. There’s even a cross-section or two to help the DM understand some elevation elements … Excellent! But, alas, all is not well in Sunken City-ville.

Some of the encounters are a bit … mundane. Possemmen are great! Armadillo-cros are great! Yet Another Skeleton Encounter is less than stellar, as is “Generic Slime creatures.” This isn’t much of a condemnatio; most adventures have some rooms that are weaker than others. It’s just that the more mundane rooms could have been kicked up a bit, perhaps with more environmental/room details to make the encounters a bit more fun. There’s also a bit of a screw-job encounter, an arena the characters are forced in to and then a dungeon/hole they must enter to escape the certain death in it. It’s got a lot going on in it, with lightning walls, ghosts, spikes, death traps, and so on, but it FEELS forced. DCC published adventures can tend to the linear side of the spectrum but generally don’t feel forced. The arena encounter in this does.

This is $5 ar DriveThru. The preview is four pages and shows off the writing for the like murder bobo-ville and the general locales on the way to the sunken city. It does a good job showing off the “sticky” writing style. I challenge you to read those four pages and then look at the map and start running the game in your head. Should be trivial. It’s a travesty it took me this long to review a Purple Sorcerer adventure.https://www.drivethrurpg.com/product/102457/Perils-of-the-Sunken-City-DCC-RPG?affiliate_id=1892600

This entry was posted in Level 0, No Regerts. Bookmark the permalink.

12 Responses to Perils of the Sunken City