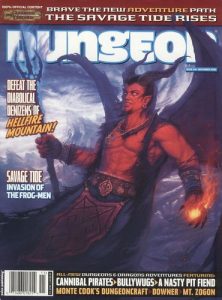 Savage Tide adventure path part two. When the synopsis contains “the party must then race to …” then I’m predisposed to not like it. “Stilt-walking monks” is something I would use if I were lampooning a genre. You are tracking down the tool from the first adventure. First have to journey to a village, but rowboat, sailing ship, or overland, varying by days to reach the village. Your choice is meaningless since nothing changes in the village. In spite of this the village scene is a good one. Rabid animals tearing each other apart, a bay oil slick on fire … the read-aloud sucks shit but the concept is a good one in spite. It doesn’t help that everything is all mixed together in the DM notes, making pulling out useful information difficult. It’s as if someone managed to successfully describe, in generalities, the vibe from the DCO intro … but buried it in the DM text and all specifics were instead terrible generalities. It’s full of embedded backstory shit, but it’s ALMOST got ahold of something good with the savagery vibe. This sort of “Rage virus” like 28 days later thing is pretty nice. There are a few challenges back in the main town, you know, the one you raced to to prevent your employer from being killed in revenge, making your way through some parade encounters including the ridiculous stilt-walking monks. Finally, you get to stop a bullywug attack on your employer’s house … which is very poorly handled, described like a typical exploration adventure instead of a more lightweight assault-type type adventure with tactics, etc. The outline of this adventure and it’s concepts are not bad and in some cases have some very nice imagery associated with them. But the endless embedded backstory, boring read-aloud, crappily organized DM text all contribute to something hard to run. A rewrite of this chapter could be something to look forward to.

The Fall of Graymalkin Academy
By Mark A. Hall
Level 9

An assault/looting on a magic school that is now a war zone, with four faction vying for control. Kind of Hogwarts if the final battle went on two months and has settled down in to a less fierce campaign. Dead students, magic books, little magical features. The map could have used some shading to show which areas were under whose control. Another good idea that needs at least? of the words eliminated and the rest rewritten to be more evocative. The faction play combined with a wizard school battle aftermath make this interesting. Summoning circles, greenhouses, labs … the entire Hogwarts is here to explore.

Convinced/hired by a fire giant king to wipe out an evil temple in the nearby mountains. This is just a simple temple assault where the defenders are fire giants and devils, with little advice about the defenders responding. These sorts of things remind me more of mini’s gaming than RPG’s. You CAN do assaults RPG-style, but these high level ones, especially, just seem like excuses to combine kits and stats and make EL-appropriate encounters. *sigh* high-level D&D …