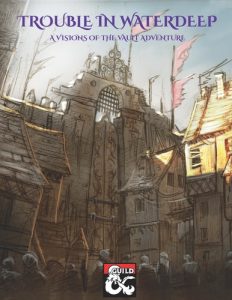 21 pages of linear crap (with sewers!) that dips in to “barely comprehensible” territory wrapped in lipstick art & formatting to make it look decent. It embodies the more recent design style that calls for scenes instead of relying on player-driven interaction. Hackneyed, barely comprehensible, sudden scenes springing up, and poor DM support round things out.

The cities poort section is suffering from a plague. The players enter, have a couple of scenes to find poisoned grain, get led to the sewers to find zombie workers digging tunnels, and are led to a noble house to learn everything is masterminded by a bastard son who is killing everyone there to cover up his tunnelling for a longevity amulet.

The very first ‘scene’, past the hook, exemplifies the style of design. Two guards stand at the gate to the poor district. They have no personality, or even stats. You can’t bribe them. You can’t intimidate them. You can’t get in. You HAVE to go to the next scene, which has a merchant with a stuck cart. Helping him gets you his papers to let you in. This is SHIT for design. Linear, doing exactly what the fucking designer tells you to do. D&D on autopilot. Just sit at the table and roll your fucking dice and keep your ideas to yourself you POS player scum! It’s the DM’s story! Fuck. You. Real design would have given us a few details about them, supporting the DM in roleplaying them. It would have allowed you to stab the fuckers. Or put a building nearby to climb on to get in. Or Let you bribe them or intimidate them or befriend them. It would have ALSO provided the stuck cart. Then the PLAYERS get to decide how they want to approach the entry to the district, with the designers having provided the supporting material for the DM to respond.

Worried about catching the plague? Have no fear! The characters CAN’T catch the plague, according to the text! Recall folks that this is consequence free D&D you have to eat the poisoned grain for WEEKS to get sick! Yeah!

There’s a nice vignette where a couple of noblemen retainers are handing out bread to the crowds. There’s a pickpocket, and a cream, and one of them chases after. The crowd rushes forward to get their bread, women and children in danger of being crushed … and that’s it. It’s a nice scene, lots going on, lots of potential for improvisation (completely unsupported by the DM text, of course) … and no consequences. There is no payoff. This is followed by a family wanted to get past a barricade guarded by two retainers. It’s just left hanging, with their stats. It’s so poorly supported that it’s almost minimalist. Imagine the four paragraphs of text were “2 guards won’t let a family carrying bread through a barricade. Their son is sick on the other side and the guards say everyone inside is DOOMED.” That could be an interesting wandering monster encounter in another adventure. In this telegraphed thing though it’s clear that it’s so poorly written that things have been left out and assumed. Of COURSE the party will attack, I mean, stats were provided and everything!

The next section starts the party in an infirmary; it’s just assumed the party is there. This sort of “now you are here” stuff happens all the time. The bad guys are all half-orcs. I’m not a paragon of social justice but fuck man, why? It’s the fucking laziness that gets to me. Like the exciting adventure (linear) in the sewers! Yes, the next section is all about sewers! One room the party overhearing a bad guy talking to some half orcs from outside. Stats are provided for ‘Gar’ a half-orc. Is that the dude? No, it’s supposed to be a human and the stats are for a half-orc. Who the fuck is the ‘Gar the half orc’ stats? It’s both linear AND incoherent, a great accomplishment!

It’s $4 on DM’s guild, or if you go look on Reddit you can find the designers pimping a free download version. This thing has all the trade dress of a WOTC adventure and doesn’t even reach THEIR low standards of quality. The preview is three pages and will get you a view in to the guard scene and the pickpocket scene. It’s a good preview in that it shows you what’s typical for what you’ll find inside.
http://www.dmsguild.com/product/205194/Trouble-in-Waterdeep–An-Urban-Adventure

14 Responses to Trouble in Waterdeep