The Treasure Vaults of Zadabad 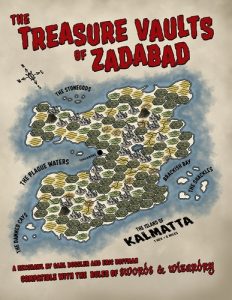 Hot wind snaps the black sails of the Soulcatcher as an eager voice calls from the crow’s nest, “Land ho!” Ahead lies the island of Kalmatta, your destination, home to plague colonies, marooned pirates, madmen and secrets no mortal mind was meant to uncover. It is also the location of the ruined city of Zadabad and its famed treasure vaults. Whether fortunate or ill-fated, you have in your possession the Rod of the Crescent Moon, a relic of dead religions and forgotten kingdoms. It is also the key to unlocking the vaults. But finding the lost city is a challenge many have accepted, but none have survived. Fetid swamps, harsh jungles and unforgiving mountains hide your prize. How far will you travel and how much will you risk to uncover the treasure vaults of Zadabad?

This is a 64 page hex crawl on an island, looking for a lost city and its treasure. Pirates, big game hunters, natives, tombs, a lost city, giant animals … it’s all here. Any hex crawl on an island will force comparisons to Isle of Dread. To its credit, this is about as far removed from Dread as you can get while still containing the major bullet points of native, pirates, lost cities and giant animals.

The natives are the descendants of a former plague colony. The pirates have a little town and will trade with you (a refreshing fucking change from the usual Attack On Sight pirates.) The toombs, and several other sites, are mini-dungeons. There are resources to exploit and mine/trade. It’s got a little of that Isle of the Unknown weirdness. I’ll summarize everything as saying it’s got a little Land of the Lost vibe going on, sans Sleestaks. The mixture of the tropes is refreshing.The plague village, the big game hunters, “friendly” pirates, teleporter circles and ancient tombs. All with the goal of exploring the island to find the lost city and its treasure vaults. There’s a hint of whimsy at times, with a knob turned to eleven, a heavy metal axe, and In The Garden of Eden all appearing in the lost city. For those that are turned off by this meta, it’s mostly confined to that one area and easily avoidable.

The adventure has two (three?) problems, both not new issues. First, the encounter text is laid out incorrectly. Yes, I said incorrectly and Yes, that means that there is a right way. It engages in a form of description in which things are explained in order. FIrst let me describe the trees in two paragraphs, then let me describe the acorns in two paragraphs. Then I will describe the Giant Ape statue that looms over everything and glows bright red. This is not a format that is helpful at the table. As you turn to an entry and begin to scan it, in order to run it, you either get lost in the beginning paragraphs or miss something. “Oh, yeah gang, there’s this giant glowing red ape statue that’s 90’ tall towering over everything.” That’s not cool. The descriptions need to be laid out in a manner that help the DM pull information out. That could be done with (SHORT!) read-aloud that mentions the major features. Or a brief summary in the first few sentences of the DM text. Or by bolding words in the various paragraphs (IE: highlighting it for us) or by using bullet points or indentation. There are many options but the result needs to be a text that assists the DM by making the information easy to find.

There’s a treasure room description on page twelve that’s a good example of this. The room is dry. There are intact paintings on the wall showing X, There are several chests of silver bars. Then there’s a section on the problems involved in moving heavy silver bars long distances. THEN there’s a separate paragraph telling us there’s also a mannequin wearing a colorful robe. Well, FUCK. I wish I knew about that earlier. This isn’t an isolated occurrence. Half column encounter descriptions mix the relevent with the irrelevant, mix up the important information, and generally show little care about how the information is organized in order for it to be used well. Which is a shame because some of it is good.

It’s got a great unique and colorful magic items, lots of new monsters, but also leaves out things like “what happens when your the dead woman back to life… you know the major feature of multiple encounters.” But the other major miss comes from the nature of the hex crawl proper. There are very few encounter areas that lead to other areas. The hunters and pirates have rivalry, and some teleportation circles, but there’s not much that leads you from encounter X to encounter Y. Rumors, partial maps, inscriptions, etc. The effect is a party just wandering around the island, exploring every hex so they don’t miss something and/or find the lost city … because no one else knows about it. In Dread you know about the Central Plateau, but here you just wander about. I’m not sure that exhaustively searching every hex on the island is “fun.” I wish there was more clues to things integrated in and maybe some words about seeing what’s in the surrounding hexes from the hex you are in. That would both reduce the tedium and provide some nice roleplaying as you find giant poop, or smoke in the distance. A brief paragraph at the start describing the general layout/overview would have been nice also. These factions exist doing these things, etc.

If you like Dread and you have a highlighter then this should be ok for you. It’s better than most Dread hex crawls and you can certainly make something out of it, with effort.

It’s $8 on DriveThru. The preview is four pages and doesn’t show you anything other than the table of contents.https://www.drivethrurpg.com/product/176644/The-Treasure-Vaults-of-Zadabad-Swords–Wizardry?affiliate_id=1892600

7 Responses to The Treasure Vaults of Zadabad