The Trail of Stone and Sorrow 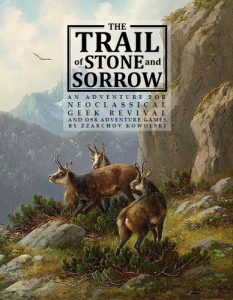 Something wicked has emerged from the mountains and begun turning things to stone. The villagers are scared and have begun casting a suspicious eye towards a foreign wizard.

This is a rather short adventure, at eight pages (with three being title page filler), and focuses on the blurb: something is turning things to stone and there’s this wizard nearby … It s good little adventure for tossing in to a one-night party, with strong social elements for the party to roleplay and a mystery for the party to look in to that should not lose the party. The text could be formatted better for information transfer, but, it’s also only four pages long and is a decent little adventure for that size.

The wizard is rich, he’s foreign, and he’s a wizard; three strikes and the Salt of the Earth point their finger at you. Following the breadcrumbs, with the wizard or one of the other clues related by the villagers, leads to a trail or crushed vegetation, hoofprints, and/or stoned creatures. Following the rail leads to the creature. There are notes to convert to OSR, which is easily done on the fly.

More than a side-trek and less than most adventure, this is probably a single night adventure. Roll in to the village, get hired and talk to folk, then start in a clue and follow it to the end of the trail. To its credit you can enter the adventure from many points: the wizard, the stone creatures, rumors, and the adventure is open enough that starting at site three does NOT mean that one and two are not relevant anymore. It’s more than likely that the party will revisit locations several times for what is, in essence, a social adventure.

The situations presented are pretty strong, if a little long. The villagers distrust the rich, foreign, wizard, for all three of those reasons. That’s a pretty good hook in to roleplaying them. The wizard is relatable and yet suitably wizard-like in his esoteric studies. The farmers under attack are frenzied, sobbing, in grief, and shock and horror, which again comes across well in the writing. The creature has a good little hook: it turns things to stone AND does a mind transfer from the victim in to the creature body. That’s some gaze attack!

It’s only four pages but, still, needs a highlighter. The writing gets a bit long in places, or, maybe, I want a different word. It could have been bolded or indented in places in order to make the organization of the information better. The goal, of course, being for the DM to scan the text quickly to find the important bits during play.

It’s Pay What You Want on DriveThru, currently at around $1.80. The preview shows you three of the four adventure pages (five if you count the map) so you’ll get a good idea of the adventure and the writing style. https://www.drivethrurpg.com/product/141915/The-Trail-of-Stone-and-Sorrow?affiliate_id=1892600

2 Responses to The Trail of Stone and Sorrow