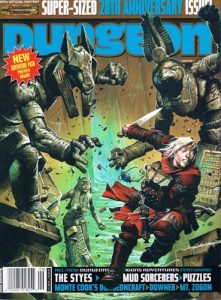 It’s interesting, I’ve noticed another tonal change in Dungeon Magazine. The last few issues have contained adventures with a variety of styles. Linear, combat focused, more traditional styles. Accident or purpose? Who knows, but I do find the uptick in useful content refreshing. I’ve not been lothing my weekly review nearly as much.

Be aware: I’m fond of urban campaigns. Wererats. In sewers. Oh boy. Short & straightforward, the party learns some ratcatchers are missing. Checking in with the guild find the guild leader missing. A three room sewer reveals a wererat, which leads to a three room scow with another. End. I applaud the terseness, by Dungeon standards. This has a modicum of a low-tech/grunge feel to it, with a half-orc selling meat pies made out of rats and a “pigeon swarm” as guards in the sewers, as well as a giant cockroach. It’s nice theming. The NPC’s also fight to the death, for the usual reasons of fearing their superiors. Still, there’s room in this for roleplaying, bluffing enemies and the like. It’s getting pretty close to the platonic form of the lair-based/event adventure, but the roleplaying available and low-tech/low-life elements make it a cut above. It would make a nice little thing to dump in to an urban campaign.

The Weavers
By Richard Pett
Level 10

A long-winded linear adventure. Bob pleads with the party to stop an impending spider infestation in the city. You follow a linear trail, having fight after fight. Pretext after pretext for combat. Dude doesn’t answer his door and has a “guard drake.” Thugs don’t like people asking questions. On it goes. This is augmented by MOUNTAINS of justifying text. There has to be multiple paragraphs justifying the guard drake. Bobs mansion has a museum and there has to be a tour, to no purpose, so each room is described. The adventure goes on and on like this, as you follow the line,

This is the … fourth? version of this dungeon, I think? 2e (Dungeon #37), 3e (this issue), 4e and 5e. It’s a Tomb of Horrors like trap & temporal stasis dungeon full of puzzles. As I said in my d#37 review of the 2e version, the first room is a good example of what’s inside. Three names are on the front door in platinum letters. Examination reveals the letters of the last name “Elomcwe” can be depressed. Pressing “welcome” unlocks the door. By making this a Level 14 adventure it requires a pretext for gimping all of the players spells. Spells like augury, commune, contact other plane, etc were all originally used to AVOID death traps, but in this dungeon they, and others, are all gimped so the players can’t use them. This is a clear indication that the adventure is written for the wrong levels. Relying on Temporal Stasis is also a technique to disguise weak design. The puzzles, however, are top notch. A room with walls covered in eyes, all crying and moving. The tears are acid, making searching the walls for the secret door difficult. The adventure also illustrates the problem with the Search check. Previous editions had an element of player skill in the searching. The DM dropped hints in their descriptions, the players followed up and discovered things. In 3e this was abstracted to The Search Check. Just roll the dice, or take 20, and don’t bother with the more interactive portions. Rolling dice for routine resolution is boring as fuck. Once, running 4e RPGA at a con, a dude rolled his diplomacy to recruit an army of floating eyeballs from a bunch of wizards. “Uh, nope. What do you actually SAY?” I asked. “Uh, you’re one of THOSE dm’s. Can’t I just roll?” was the reply. This moment has stayed with me an excellent example of how mechanics can ruin play. Anyway, this is close enough to a clone of the D#37 adventure to be the same, except with the 3e mechanics. The 2e version, in play, should be stronger, because of the mechanics issues.

Challenge of Champions VI
By Johnathan M. Richards
Any Level

As with all of the others, it’s just a series of encounters for the players to overcome. It gets its “any level” designation because everyone in the contest gets the same stuff, provided in each room on scrolls, etc. Thus this is, essentially, a series of player challenges rather than character challenges. IE: the fun part of D&D/Combat As War. Generally the straightforward way is the worst way to tackle these situations, so ideas like “I stab it” are likely to be poorer choices than using your noggins. Creative play is encouraged. Still, I’m not really a fan of these. They require a game world with adventurers guilds with tryouts and a higher magic content than I’m comfortable with. As rooms that encourage open-ended play they are great though.