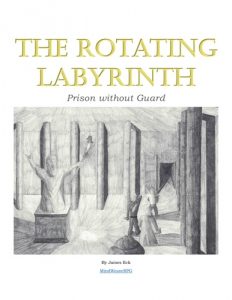 This fifteen page “adventure” centers around one gimmick: a rotating gear-like maze. A large & interesting map has to be constructed by printing it out, glueing it to cardboard, cutting out other parts and glueing to more cardboard. What you then have is a large dungeon map with some sections, circular, that can rotate entire portions of the map. And some other circular sections within those larger circles that ALSO rotate. This is combined with some sliding stone slabs that cut off access to areas, secret doors, dark portals that imps come through and some windows that give glimpses of a devil at the center. It’s a one-trick pony, the maze, with little else to recommend it beyond that. It IS a very nice trick though. And I’ve got a soft spot in my heart for gimmicks.

The dungeon has three rooms: the entry room, the prison room, and a treasure room. The entry room has a large stone statue and is the only room lit. It speaks to you, essentially introducing the purpose of the maze: to keep a devil locked up. The treasure room has a couple of unique items. The jail cell in the “middle” has a devil. It’s not quite true to say the rest of the dungeon is procedural, but it’s close enough. The circles turn. The slabs move. There are some dark portals that bring in little imps when you encounter them. And so it goes. Wander about. The maze changes. Maybe encounter some imps. Wander about.

The five rumors provided are directly related to the maze. The maze changes. There’s no light. There’s no water. Clues on how to prepare. The descriptions are bland. There’s not a lot to describe, but, even then, it’s “iron bars block access” and corridors dry & cold with smooth granite. It’s bland. The initial room, with the statue, is the best, along with “dark blobs on the walls” that the imps come through. There’s just not much to this.

And that’s both a blessing and a curse. It’s generic nature means you can drop almost anything in to it. Looking for an item? Or an oracle? Or a person in prison? The maze can easily be co-opted to insert your own plot point/thing in to it. Maybe that humble ant from DMG1e is locked in the center. But .. it’s a bland environment. Random corridor findings, more window dressing, SOMETHING to liven the place up more is needed. There’s a suggestion to include a rival adventuring party but, even then, this would need more. A four to six hour session of wandering around in corridors isn’t my idea of fun.

Enlivened a bit, I could see this as being a level of a megadungeon or a mythic place to go fetch something from. There IS prep time in this, in constructing the physical map. If you build the map AND liven the place up a bit then this would be a nice little thing. It’s the closest thing I’ve seen to a good maze and reminds me a bit of the Maze Runner movie. The map/rotation alone is worth it to have, then you can gut the place for your own adventure. Would you pay a buck for a kick ass map? That violates some core Bryce beliefs related to Setting Expectations when purchasing and Only Review Adventures … and I have ripped products apart for those two reasons. But …

If you view this as a map, and only a map, with all of the text really describing the physical characteristic of the map … then it shouldn’t end up on Tenfootpole … but it would be a cool thing to build off of if you were looking for a map to co-opt for your own adventure.

It is Pay What You Want on DriveThru. The three page preview doesn’t really show you a good example of the writing but there IS a video of the physical construction in which you can see the map and how the wheels work. It’s really quite nice, and the map and the rotation ARE the highlight.https://www.drivethrurpg.com/product/209116/Rotating-Labyrinth?affiliate_id=1892600

God, I’m such a hypocrite.

3 Responses to The Rotating Labyrinth