A Pipeful of Trouble 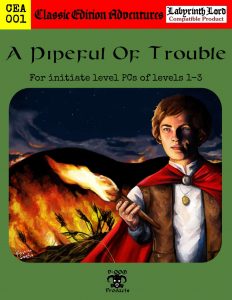 All is not well in Brierfield. The idyllic halfling village has fallen prey to unknown bandits and marauders. These peaceful victims of shattered loves and broken dreams need a band of heroes to save them. Are you willing to help them in their time of needs?

This 51 page adventure describes a halfling village, a small 26 room dungeon nearby where some bandits live, and a trial that (maybe) follows. It’s full of long tedious backstory, long tedious read aloud, long tedious DM notes … and not much else.

Bob the halfling loves Lily. He’s rejected, turns to banditry, and eventually steals a family heirloom. The villagers track the bandits to their lair, then the party shows up and they hire them to take care of the bandits/get the pipe. The bandit lair has them in it, a small sections with gremlins, and an old abandoned dwarf section with vermin. If you bring the bandits back alive then there’s a trial. This all takes 51 pages. You’d have a better adventure if it took five, and I’ve no doubt you do SOMETHING better in one. The problem is that the designer doesn’t know what the fuck he’s doing.

Come to Utah and dream a little dream with me, Picard-san, while you play your flute. Imagine a village. Build it out, in your head, in exquisite detail. The full live of the people, their routines, what they wear, why they wear it. Get DEEP down the rabbit hole. A leads to B because of C, over and over again. Spend a week, non-stop, doing this. It’s alive in your head. Now, run this village as an adventure. Record it as you do so. Village, bandits, trial, the whole thing. Now, transcribe the session. Take your week long dreaming of background and reasons and combine it with the transcription of the session. You would have this adventure. AND.YOU. WOULD. HAVE. WRITTEN. A SHITTY. ADVENTURE.

This fetishizing of REASON is the problem, along with the associated detail that comes with it. The problem is not the dreaming. Or the transcription. Whatever floats your boat to help you be creative and design the adventure. The problem is that this crud makes it on to the written page. It all has NO purpose making it to the buyer. The purpose of the adventure is to help the DM run it at the table. Mountains of extraneous detail does not help the DM do that. Backstory does not help the DM do that. Evocative and terse writing helps the DM do that. The designer is intimately familiar with the adventure. It had lived in their head a long time. The buyer doesn’t have that benefit. The goal of the designer is to communicate a vision to the DM *BAM* fast and deadly. An instant explosion.

Multiple pages of backstory doesn’t do that. Want to include it? Great, put it in the appendix. You know how many cocks I had to suck this week at work? No? Well tonight I have to run a game. And you have given a massive amount of text to slog through. You’re not helping. Then, I get to a new room. And have to slog through more text. “What do you see?” the players ask … well, hang on, I’ve got two pages of read aloud to get through, and we all know EVERYONE will have gotten bored after three sentences. This. doesn’t. Fucking. Help. Get in. Get out. Quick. Evocative.

Here’s a section pulled from the intro to the dwarf caves: “Soon after construction began, the dwarves contracted the plague. The disease was strong and fast acting. All of the dwarves died, including a pair that left the complex intent on travelling to their clan for help and perished in the wilderness.” That does NOTHING. How does it advance the adventure? How does it to lead to fun & exciting play for the players and/or make the DM’s life easier? It doesn’t It’s yet another cock I have to suck in order to get through the day. How about this little gem, pulled from another room: “Although it is not evident, this room was the servant’s quarters for the scullery staff for the dwarven complex.” So … it’s irrelevant? I’m sure whatever little dream you dreamed of the life of generations of people coming through this room was a nice one, but it has not place in the adventure. It. doesn’t. matter. You’ve done nothing.

More is not better. “Just in case the DM needs it” is not a valid excuse. This text bears down on the DM, hiding relevant details, making it harder to pick out the ACTUAL content for the room hiding behind all of that trivia. And that’s what it is. Trivia. This happens over and over and over again in this adventure. The inclusion of trivia and backstory and useless detail. “Mary likes to wear yellow dresses.” Who the fuck cares? Is that relevant? Does it make Mary relevant? If she dressed in a cow costume then at least it would be memorable to the players. One of the bandits says “barely” a lot in conversation. That’s a good detail. It gives him personality. Everything else, almost every physical description, all of the intricate backstory, it’s useless. A page to describe an NPC bandit is not helpful. Putting five bandits in a table with one sentence each for personality IS helpful. It helps the DM find it, it summarizes just the important bits.

There is the occasional bit of nice detail. An NPC personality. A word or two to describe a room. The entire “trial” idea at the end for running a “consequences” portion … including maybe a hanging. That should cause things to sink in a bit with the players. But it’s all fucking buried behind the useless detail of backstory or prescribed actions that read like they came from a session transcript. Detailed juror thoughts are not needed. Just include a few words in ONE sentence, maybe two, and move on. Leverage the DM. The wandering monster tables, for example, do a decent job of providing just a little extra “Umph” to the encounter. Skittering out of weeds, charging through the party, etc. They still take an entire page for six and are about twice as long as need be, but, still, short enough to wade through quickly to the good bits.

Understanding the purpose of a published adventure and the ability to focus your writing via editing, are two basic skills that all designers should have. Almost no one does. This leads to the shovelware industry we have today. Wanna buy an adventure? It’s probably crap. Knowing this you don’t spend much, driving prices down. Steam gives refunds, if the online stores did also maybe the state of the industry would improve. I wouldn’t want to discourage anyone from writing, but fucking christ, before you make us try and play it can you PLEASE make an effort to find out HOW to write an adventure?

It’s $5 on DriveThru. The preview is eleven pages long. You’ll get to see the massive backstory and the massive intro read-aloud. This is fairly indicative of the writing style present in the rooms and areas and should give you a decent example of the detail/backstory problems prevalent throughout the adventure.
http://www.rpgnow.com/product/208342/A-Pipeful-Of-Trouble

6 Responses to A Pipeful of Trouble