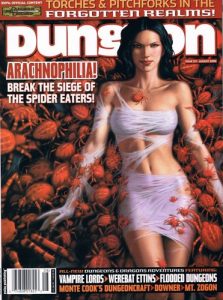 A short adventure with “good guy” arenae. Arriving at a village, the party finds it encased in webs with giant spiders on it. Inside the villagers relate a large number of them are missing. A lair is found, with spider eaters in it who are attacking the peaceful aranea who live there … and who are also the missing villagers. A guy in town brought in the spider eaters, so it’s back there to free the rightful mayor and kill the other guy. The implied morality is a little lame; it would have been nice to at least have the option of fighting the aranea also. The town sections are massively overwritten. Accepting the morality tale, the fifteen-ish room aranea lair is NOT a disaster. It has some elevation changes, kid hostages, a giant paralyzed aranea queen full of spider-eater eggs, a cocooned hydra, and an old pirate treasure. The variety is nice and while the read-aloud is boring and the DM text too long it is a cut above the usual dreck. Another one that, with some tweaks, could be salvaged. If it were, it would be a good example of the “initial encounter, roleplay, lair, big bad guy/followup” style.

You ride through an underground canal on a boat and kill things in this mostly linear dungeon-float. The water has piranha swarms in it … which is pretty cool. The dungeon claims 25 rooms, has columns of read-aloud and lots of extra detail for rooms that have nothing in them. It all ends with a large color & symbol puzzle. It’s a Disney dark ride, with combat. It’s hard to get past the linear canal gimmick and rooms stuffer with water-themed ghouls, water themed ogres, water-themed trolls, etc.

This starts out well. Kind of. Town is in an uproar: there are rumors the local lord is a vampire. Investigating the rumors via roleplay/town interaction is a major part of the adventure. The local lord is a little fishy. The local ruins point to the lord. Everyone in town, including the minor officials, have a slew of anecdotal evidence pointing to him as a vamp. It’s actually three hags casting charm person, dominate person, and modify memory over and over again, along with their Hagspawn Berserker minions who all wear rings of chameleon power. That parts all pretty lame. The hags live in a little compound under an illusion pond that is probably just one big pitched battle when discovered. The whole “town in riot” and a mob marching to the lords manor with pitchforks and torches is great. The concept is great. The social portion is quite cumbersome to run, being not organized very well, and the hag stuff at the end is a big break from the rest of the adventure … it could have been handled in town or something better rather than just a lair hack/pitched battle. And I can’t see ANY reason for the dominate/charm/modify memory garbage. Subtle events, rumor, and innuendo would have been a much better method.