The Weird That Befell Drigbolton 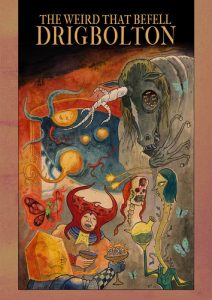 Something fell. A sickly gloaming lit up the night like mock daylight, just for a moment, and then the hills trembled. Now, an alien entity lies brooding in a crater gouged out of the moor. Local folk are enraptured with the toothsome jelly exuded by this being, but are blind to the true nature of the events unfolding in their rustic little backwater.

This 63 page digest details a small region around the village of Drigbolten, and the events currently transpiring. There are about eleven locations detailed, about half of those have another dozen or so sub-locations. It’s laid out sandbox style, with a regional, a goal, and a timeline for what could happen independent of the party. It’s weird, has some good ideas, feeling a bit like a Lamentations adventure without the death metal flavor. It’s also got a rather ponderous writing style that turns sentences in to paragraphs and hides the important bits the DM wants.

I like an adventure with flavor you can hang your hat on. Something in the adventure that you see and say “Oh yeah, I’m gonna love running this!” There’s an element to both creativity and writing in that, both contributing towards the same goal. Getting the DM worked up and visualizing things in their head, easily, is no mean feat and critical to producing an adventure that the DM can use as a springboard to their own filling in of the details. This thing has more than few of those moments. Starting with the most obvious: the star jelly. When the party arrive they see the villagers slurping this stuff down. Adding it to their beer. Adding it to their bread. Eating it. Drinking it. They all think it’s mana from heaven. As you read this you just KNOW how things are going to know. You get that little gleam in your eye. The wonderful ways you’re going to present the villagers consuming it, their fervent belief in its mana-like nature … and the parties horror-filled reactions. It’s telegraphed, but in a good way. You’re building tension with the party in a communal way. You know what’s going to happen. THEY know what’s going to happen. The fun is getting there together … and they get to plan and plot and all the other things that lead to goofy plans going wrong. There’s another strong example in the Rooms of Repast. The villagers have a room in their homes where they keep their dead relatives and ritually/symbolically feed them, in an ancestor-worship like dealeo. So, DM’s of the world, which if you is NOT grinning ear to ear right now imagining presenting this to the party and then seeing their reactions? Giant meteor crater, lots of wealth from the ore scattered about, and some locals with strange ideas add up to everyone sharing the secret and reveling in it. I’ve presented the best examples but there are a few more at other locations.

Given how poorly it’s generally implemented, you’d think that a sandbox adventure was rocket science. It’s not. The designer here has all of the elements included that you need. There’s a region with a variety of locations, some detailed and some single encounter locations. There’s some NPC’s to interact with and be both foil and a driver of action. There’s a reason to get to the region and travel around in it, the hooks. And there’s a timeline. The timeline is, in this adventure, what is driving the action. Each day the villagers eat more star jelly and certain things happen to them (SURPRISE! Wait, no one was surprised?), with the timeline detailing those changes and events. Likewise a few other locations in the region have timelines. Things happen. Not in a railroad plot manner, but in the natural course of events if the players don’t intervene. This is ‘plot’ done right.

The adventure comes with three reference sheets. You can think of these as a one-page dungeon. It presents a map and then a small summary of each location, with the expanded text for each location being found the main booklet. Similar things were done in Stonehell and maze of the Blue Medusa and it’s a good concept. Read the text and then run the adventure from the summary, relying on your memory and the text in the summary queueing that, with some quick thumb-backs when needed. It’s not done to as great an effect here as I recall in other adventures. The descriptions for the various locations concentrate on the mundane rather than the interesting and gameable, almost as if it were a travelogue to be handed out to the players. The pond mentions good fishing, but not why. The entries are all missing that last little bit to get the adventure going. Each entry DOES have a page reference, to go to for the real encounter text, something that more adventures could do. (Well, not Stonehell or Blue Medusa, those pages are obvious due to proximity.) Some timeline summaries appear on the reference sheets also, but these probably could all been pulled off and put together with the other timelines on a single, separate reference sheet. “Home of Miglin the Goatkeep” doesn’t really help. Miglin needs his personality added, as well as the little tidbit that drives action around him.

There are some things to quibble with with the organization. An appendix could have used for things like the Star Jelly description, to find it more easily and get the data dumps out of the main text. The hooks are not the best, being of the “sent on a mission” variety. The whole “starmetal is valuable” thing could have been worked up a bit more, instead of just having it as a pretext for someone to hire the party and put them under geas. A “gold rush” timeline would have just added to the chaos.

The major problem, though, is the ponderous nature of the text. Everything is drawn out and written in an indirect style. Lots of modifying clauses at the beginning of sentences, with detail and repetition that goes on. Pike Pond, one of the minor locations, is a good example. There’s a brief three sentence introduction, that we might call the “normie” description. The village men really like to fish here, the fish are easily caught, and there are pike present also. But then there’s a half page more description to tell us this is all because of WIllow the water nymph, who mates with the men in the spring, and the plump fishes internal anatomy is distinctly human. The text is trying to be a little too clever and flowery. I love flavorful text and words, but the real skill is in doing it tersely.

I want to like this. It’s trying to do everything right and it’s got that kind of strong pretext/flavor that I like. Making this work will require a highlighter for the main text and using the reference sheets to take some serious notes on. Conceptually, it’s good, but it could lose half to a third of its pages/text to a STRONG edit and be MUCH better. Combine that with a little reorganization and a rework of the reference sheets and you’d have a good adventure that was easy to run at the table. As is, it’s a good adventure that’s not easy to run at the table.

The preview on DriveThru has six pages. Pages three through six cover the core background summary (glad to see that included!), the hooks, and a bit about the timeline. Those pages do a pretty good job of being representative of the writing style. The same sort of voice/style is used throughout. You should be able to see how they could be shortened up by half to a third and still retain the color and flavor, while bringing more focus to the text.https://www.drivethrurpg.com/product/207631/The-Weird-That-Befell-Drigbolton?affiliate_id=1892600

6 Responses to The Weird That Befell Drigbolton