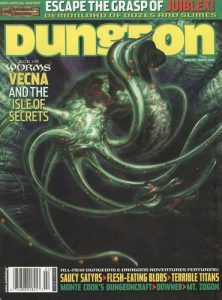 There’s nothing to this “fey type” themed adventure. The party is assigned a mission, they take a linear path through a forest, having linear combat encounters, reach a destination and have more linear encounters. Everything attacks. It’s just all combat. You know how to detect when you are being tricked? The NPC doesn’t start combat immediately. That’s your clue that you should just stab the due in the eye socket. It’s got a gossamer bridge made of webbing crossing a river, and an old cart all viney and other interesting little snippets of scenery, but it ruins it by just sticking in a combat. The thinning forest gives way to a blasted region of swampland (ok start.) “This area may have once been a very mossy, wetland glen, full of sprites and darting creatures.” (the adventure tells us, boringly.) “A greasy smoke hangs over everything” (yeah! nice!) “the once-prevalent trees being hacked down.” (boo! conclusion!) There’s a wooden signpost with a pixie crucified on it. Ouch. Guess the DM fucked with PC one too many times, eh? But, this is a good example of the adventures encounters. A mixed description that does a halfway decent job setting up a vivid little scene. These are not uncommon. Nor are the “and then they attack” words that are attached to every encounter. It’s mini-combat with a little pretext wrapped around and nicer terrain than most mini-combat folks make an effort at.

Caverns of the Ooze Lord
By Campbell Penney
Level 8

Slime themed cult. IE: Jubilex. Poor Jubliex. A pretext brings you to a village. If you get them to talk to you then you learn strange things are going on. (Weird! In a D&D village?!?!) Poking about reveals a slime cult and pointers to a cave system nearby. The caves go hog wild with the slime theme. It’s a little one-note in the “the slime creature attacks” department, but it does have a few things like pits, slopes, and crystal walls, pools and the like that the previous adventure didn’t have. It aso takes two pages to describe the slime cult in the village, far too long for what you get/need. This being Dungeon the wordiness continues in the encounters. Here’s the DM notes for a room with four pools of slime in it: “Morbion created these four pools of olive slime by using stone shape to create two-foot-deep hollow depression in the floor. He then transplanted a batch of olive slime to each and has been cultivating the four over the past several days in an attempt to develop variant forms of the ooze. So far, his experiments have met with failure and he’s only grown four patches or ordinary olive slime.” So, basically, there’s four pools of slime in a Jubliex temple? Who woulda thunk it! A great example of padding your word count using backstory that has nothing to do with the adventure at the table.

The Library of Last Resort
By Nicolas Logue
Level 16

I always seem to forget that Dungeon has this Age of Worms things in it. Perhaps it’s all the rubbing alcohol I drink after reviewing each one. Something like two of two and a half pages of read-aloud relate some backstory and the next steps, which involve going to find a library to tell the party where an undead dragons soul is hidden. There are a couple of small encounters in the library ruins … including orcs you can talk to! Then it’s through a magic gate to talk to some druid asshats who make you “conduct the trials!” Three or four quests/combats on the island also have you meeting a dude sporting the Hand of Vecna. Score! That’s the hand and one of the parts of the Rod of Seven Parts, for those keeping score! Anyway, more plot combat, a dream sequence with still more plot combat, and you’re done. It’s all about following the line to the next place and having a fight. It’s remarkable the extent of the backstory provided to try and enable that.