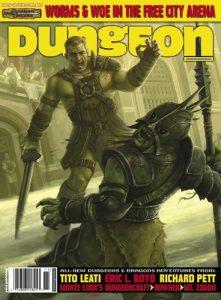 Why keep on reviewing Dungeon? Because sometimes, when things are dark, you stumble on The One Ring.

Danger: I LUV a good urban adventure. This is a DELIGHTFUL adventure! It’s a little mystery/guard mission in an old ladies house and is about 20 times more Ravenloft than almost all of the Ravenloft adventures. The Swan Street Slicer has escaped! On the way to jail, the mute halfling’s jailwagon was in an accident and he’s escaped! The guard is frantic, as is the entire town! Extra guards are everywhere! The party (hired? Hastily deputized?) is given the task of guarding the house of an old lady, her family having been one of the last victims. This is a nice hook. Hysteria in the city is fun, and its a good pretext as to why the guardsmen aren’t doing the guarding. They ARE, but EVERYONE/PLACE needs guards. It’s all hands on deck! So the party is in the old ladies house, guarding it/her and her daughter. The NPC’s in this are wonderful. A bitter old woman in a wheelchair. Her lovely daughter, no longer engaged since her fiance was murdered by the slicer. A halfing butler who is best described as ‘simple.’ Strong NPC personalities to interact with. Then there are the people who come to visit, PERFECTLY described. “Nina’s dim-witted but good-natured nephew.” or “a greasy but ambitious banker” and so on. In one fucking sentence for each NPC this adventure does what so many others can’t seem to do: focus on the NPC description on interactivity. Who the fuck cares what your special snowflakes eye color is? What we need to know is how to play them when the party comes to interact. There’s a great little table included for the old woman and her daugher on how the parties interactions with them will impact their attitudes/diplomacy checks. And, even better, the table notes WHERE YOU CAN FIND THINGS! Giving the daughter some letters from her dead fiance will give you some positive modifier, but the table also tells you that they are in room six! Oh the humanity! A writer who actually makes things easier for the DM! The NPC’s, the house, what’s actually going on, the window dressing, t all contributes to a wonderfully creepy vibe. As time passes the party will do that thing that brings joy to the hearts of players and DM’s. They’ll say something like “Ohhh! It’s her! I know it’s her! Ohhh! I know it!” This sort of build up, starting out slightly irregular and building until the party snap in to action, is wonderful. “Telegraphed” isn’t quite the right word, but the mix of horror, with the … levity? Anticipation? From the players is great. The maps are way too small, and you’re going to STILL need a highlighter for the rooms. They are shorter than usual for Dungeon, but still need a bit of help. That rarest of beasts: A Dungeon Magazine adventure Worth Checking Out.

Another in the Age of Worms adventure path. I swear I’ve seen this adventure before … in Dark Sun form? You’re hired to participate in the cities gladiator games, a cover to investigate the tunnels below the arena. It’s the usual mess. Badly organized. Mountains and mountains of text spewed out all over the place that you have to wade through to get even the smallest semblance of how things are supposed to work. Anyway, four gladiator battles, some rooting around in the tunnels, hopefully the party finds and kills the stuff in the evil shrine before the final gladiator battle. If not, there’s a potential for thousands of wights to be turned loose on the city. THAT would be a cool thing to happen. It will be interesting to see if the next chapter of this adventure deals with that possibility. The adventure isn’t in and of itself, bad, but its very badly put together. It’s laid out in the usual encounter/key format but it’s NOT an encounter/key adventure, at least not most of it. It’s a social adventure with some investigation. You hang around. You meet people. You try and figure out how to get in to the secret tunnels, not be seen. Essentially, you want in to the Employee Only areas of the mall/football stadium, dodging employees, guards, etc. THEN you can explore and kill shit in the evil shrine. But its not laid out anyway near that to support it. Sure, you CAN run, if you dump a shit ton of work in to it. Even with the stupid fucking tactics-jerkoff-fest gladiator fights, this could have been a decent adventure, IS a decent adventure, if only you could pull the shit you need out of it in a way that makes sense for running the game. Most of the maps in this are small, and nigh unreadable, another stone against it.

The finale of the three-part Vampires in Waterdeep adventure arc. Thank God. “The fissure opened up over six decades ago, in the Year of Catacombs (1308 DR). It’s just large enough to permit passage by a size Medium or smaller creature.” This is the kind of joy you are in for. And then … “In the Year of Catacombs (1308 DR), a purple worm passed through the Wormwrithings Portal (F2A) and appeared here. The damage might have been far worse is the temporal stasis trap in the hallway had not caught the gigantic worm at the locations marked F2B. Rge Company of Crazed Venturers stumbled upon the purple worm in the Year of the Gate (1341 DR). Calling on connections that Company member Nain and Savengriff had with the Blackstaff Tower, the Company managed to have the worm removed, after they transformed it in to solid silver with the help of a magic item. Khelben later cast gate seal on the portal ‘for the security of the city’ before departing.” That is but one part of the massive text in one hallway that has some stone damage in it. How the fuck does that enrich the adventure for the players? Actually, I’d much rather be playing THAT adventure than this one. Turning a purple worm to silver, looting it, all to get access to the dungeon its carcass is blocking, sounds like fun. But that’s not THIS adventure. There’a merman vampire, with a ridiculous picture. I don’t see how this is runnable in any manner other than worst caricature ever of a bad D&D game/DM. Go from room to room and kill shit. Joy. Oh Eric, I’m glad you finally escaped to a new job at the university. I just wish it were more memorable.