AA#1 – The Pod-Caverns of the Sinister Shroom 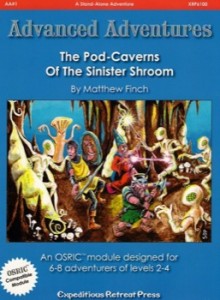 Villagers and livestock have begun disappearing and strange shapes are being seen in the woods. Locals have tracked the creatures back to a cave where a stream enters it. It’s up to the party to stop this!

That’s the extent of the backstory for AA1, the first adventure in the Expeditious Retreat Press Advanced Adventures product line. I like my backstory short & sweet, so this is fine with me. Further details come out in the dungeon, when appropriate. I much prefer this style of exposition then a long introduction at the start of the product. More than a column or so and I loose interest. I don’t really care about your world-spanning epic novel, just tell me enough to get going and I can fill in the rest as need be.

The cavern complex has three levels and it’s suggested that the adventurers could start from either the first level, with expanded adventures on the third, or enter the caverns underground on the third level and have expanded adventurers on the surface world. The first level servers as a kind of outpost for the Shroom, and has several natural features that must be overcome. The second serves as the primary lair of the Shroom, while the third is a border area of the Shrooms domain and the greater underdark-like cavern complex that the DM could expand for further adventurers. The maps proper have one or two loops in them, but are not overly complex affairs. Each level has about 16 or so keyed encounters, and that’s just not large enough to support a large looping map with multiple level exits. The maps do a good job given their small size. They are interesting given that this is a natural cavern complex with a stream flowing it, with several height difference in some rooms, sloping corridors, and portcullis, grates in the floor, etc.

The first level is mostly a natural foyer to the Shrooms domain on the second. As such it is much more cave-like, with a fast flowing cave stream flowing through it, several waterfalls to be traversed, and other features of streams. The wandering monsters on this level are mostly vermin (3 out of 4) and each is given a motivation: patrolling, scavenging, hunting for rats, etc. I like this sort of thing in my wandering monster tables, it tends the make the environment a bit more naturalistic; a sense that life goes on even without the party showing up. This level has a few creatures on it placed by the Shroom as well as a vermin encounter. There are lots of interesting things for the party to poke and prod, some natural and some man-made, as well as a couple of freaky little side-items. I love this sort of mysterious & weird stuff in my modules, so I was a fan.

The second level is the domain of the Sinister Shroom proper. In this level the Shroom has his workrooms and labs were he grows his pod-people army. The central complex of worked rooms is surrounded by caverns with the stream flowing around the edges of the map, through the cavern rooms. There are far fewer ‘natural’ hazards on this levels, however there are hordes of pod-people hanging about. There’s a wandering patrol of pod-people, which encompass the wandering monster table. Once this is destroyed then the table is replaced by vermin who begin to venture out. That’s a nice element to show that the parties actions have ramifications. There are a few sets of prisoner/allies on this level, all of whom are found in some pretty freaky circumstances. This should provide the party with posers and allow them to creatively free the various groups of prisoners. the separate groups of which are made up of some pretty diverse creatures. In the absence of factions within a dungeon this can provide a nice element of living, breathing atmosphere as the party find new members to join them, along with the role-play opportunities that represents. Again, there’s a pretty good selection of things for the party to mess with: random potion bottles, a sinister chair, vats of goo. These are all the sorts of things I like to see in a module; things for the party to explore and invetigate, with both good & bad consequences from their actions.

The third level is where the Shrooms domain meets the underdark-like environment of the greater cavern system , which can expanded upon by the DM. This level quickly turns in to a natural cave system, with pools & crevices to be crossed, and an underground river. There’s a small group of renegade pod-people which is, sadly, only murderous in their intent. There’s also a group of goblins who have a small backstory associated with them which should be pretty humorous and interesting to watch play out; it’s one of the features of this level. The wandering monsters once again are composed of vermin & animals. (I just realized that when I say ‘vermin’ I mean bugs, oozes, fungi, and animals, in contrast to the 3E+ proper monster categories, in which vermin are only bugs.) There are two or three environmental hazards down on this levels, as well as some things for the party to poke/prod and get in to trouble with (Yeah storage rooms!)

We get four new monsters in this product, including the pod-people and the Shroom. They are sufficiently different to be interesting, and include a pretty deadly abomination-type creature that could be a pain for the party. The magic items are a mix of old standby’s and a few new weird ones, including an ever-rusting longsword which becomes non-magical when cleaned, until the rust comes back, and a nice little fungus staff. I like this sort of detail to my magic items. “Sword +1” is BORING.

There are some tough encounters in this module, and the lack of factions is going to make them harder. Such is life my little PC friends; poke your nose somewhere it doesn’t belong and it will be lopped off. The large number of interesting room dressing to play with, combined with the new creatures and the environmental hazards make this little thing a keeper. It’s playful in a way that some of the original TSR modules were, yet still retains a serious tone overall. It’s not quite the second coming that some reviewers indicate, but it is a VERY solid OSR product and well above average for the newer OSR products.