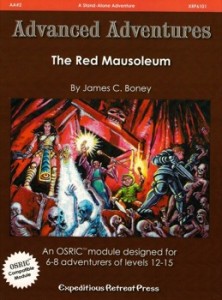 After a long period of peace the baronial patrols are encountering groups of undead near their borders. Recently an entire gnomish community was wiped out by hordes of undead commanded by ominous knights. The Baron has charged the party with wiping out this menace, which he believes issues forth from an ancient site known as The Red Mausoleum.

Well, that’s a pretty good to make if I were a betting sage. How many times do I have to say it: if there’s an unknown/evil structure in your lands then you need to build a proper road to it and maintain an effective watch. It’s called insurance, look it up Mr Baron. Hmm, maybe my words of warning are having trouble since Im reviewing these in the opposite order they were released. That would explain a lot.

Snarky comments aside, there’s a brief rumor table presented, which should be standard for all OSR product. Rumor tables are good, they provide a nice little role-playing opportunity and provide the party with some things to think and worry about. Any kind of build-up leads to much more heightened tension during play, which is a good thing. There’s a small overland trek involved to reach the adventuring site, which is set in some moors. The trek might be 15 miles long; no wilderness map is provided and the location of the site is not really explained other than the fact it is in the moors. A map isn’t really needed, this isn’t a hex crawl, but more specific location information seems to have been left out, I assume during the editing/layout process. A nice little wandering monster table for the moors is presented. It’s heavy on the animals/vermin side, which I tend to prefer, and has a few undead thrown in as well as a possibility of 1-30 orcs. Those are really the only humanoids on a 20 creature list, which is exactly how I like things. An environmental encounter or two might have been nice to see, but the list does have … Brain Moles! Sweet! I love it when under-usedcreatures appear. As the mausoleum site is approached the surround flora begins to show a red tint. The site proper is marked by four large statues and a small tomb.

The mausoleum has three levels with about 15 encounters on the first level, and eight or so on each of the two other levels. The maps for the first two levels are simple hub-based affairs, with corridors & rooms radiating out from a central location, in figurative sense. The last levels is more of a linear affair with a couple of brances. The entire place is CRAWLING with undead. Skeletons, zombies, ghouls, weights, wraths, shadows, and others roam the halls in large numbers. This being a burial complex there are plenty of tombs to explore, nearly all of which are trapped in some way. We’re looking at heavy emphasis on intelligent undead, although usually only encountered in ones or two’s. There is a main burial chamber which is protected by …. the infamous creatures in stasis. I hate stasis. It’s a cheap and unimaginative way to use normal monsters in an environment where the usually should not be. This particular room is beefed up a bit by having them drop out of stasis every 3 rounds, meaning the party will be encountering waves of creatures coming at them. There are 20 or so different groups of creatures, and they will interact and fight with each other. The ensuing chaos should be fun to watch and interact with, so perhaps this use of stasis can be excused.

There is a lot of thinking involved in certain areas of the complex. The players will need to figure a few things out to move on to the lower levels. I mean that statement in the most open-ended sense; they could puzzle out the ‘correct’ way to reach the other levels, or use teleport/rock to mud magic, or use divination magic to obtain the ‘correct’ solutions. I like this sort of open-ended element. This is a high-level module and the party should be ready to face situations like this; Divination magic is on the spell lists for a reason. Use it! It’s not just level transitions where this sort of thing occurs, there are several other areas where a thinking mans/creative play style will prove to be very useful. Unfortunately, this makes the room descriptions a bit longer than I would prefer; that’s probably unavoidable in a high-level module.

The final encounter is with a 21/19 Cleric/MU lich. It has a suggested spell use order, however I still have my concerns. Single monster encounters don’t tend to last too long with a group of high-level PC’s. He’s going to summon some help, but I feel like that aspect could have emphasized a little more.  I quite enjoyed the ‘high-level party fights hordes of the undead’ aspect to the adventure, however the environment proper felt flat to me. The evocative environments that the author usually invokes tend to be missing for the large part from this module. Then again, I AM working backwards and this is his first module in the AA line; his follow-up modules are much more to my liking. The environments are more evocative, the villains more complex/interesting, and the magic more weird.