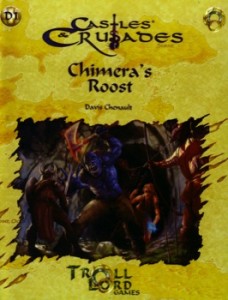 This is an excellent dungeoncrawl adventure for the Castles & Crusades system. C&C is close enough to the various pre-4E versions of D&D that a DM should have no problem converting it on the fly.

In ages long past the trolls, then a more civilized people, created a mountain hall and palace. Their engineers and artists created a magnificent palace. After a time the trolls depleted the food resources for the area and moved on. The complex was mostly forgotten about as the kingdoms of man moved in, rose, and fell. Rumors by the score were told to frighten children. Now, livestock is beginning to disappear, farmhouses are being ransacked, and a set of footprints has been found. The locals have determined they are goblins, and rumor says that a Goblin King has moved in to the fortress. The PC’s need to root the problem out!

The backstory and introduction for this adventure is a little long for my tastes, filling a page or so, however the type is large and it does combine both the history of the complex, recent events, and involving the characters. That having been said, it’s an excellent set up for an adventure. I find the concept of the monster races having once had mighty kingdoms and being great builders a fascinating one. I think it allows for elements of the fantastic and bizarre to be inserted in adventures much more easily and gives a nice atmosphere to the setting. In addition, the backstory with the locals is one typical of ignorant peasants: they’re wrong. Something else is afoot in the complex: [Monster X]! Yes, They are, for the most part ,minding their own business. Well, except for their $%^& kids! Troublemakers to the core, they are at the heart of the villagers problem. There’s a couple of nice paragraphs on playing the villagers and what the party can get from them, so while it’s not a formal rumor table it’s a pretty close relative and the DM is given some examples to get things going. It’s also suggested that the DM try to convey the feeling that this will be a short little sideline adventure, rather than the mini-megadungeon is actually is.

A small wandering monster table with four entires is given for wilderness encounters near the dungeon. Most of these are given a rather lengthy description of what they are doing in the area and how they will react. For example, a pack of Hyenas is given almost a complete column in describing how they will approach, attack, avoid, and otherwise interact with the party.  Two of the other encounters are given about a paragraph each on their motivations & style. I generally like this sort of thing, especially with wandering monsters, although I generally prefer it to be slightly more terse.

This is a good time to mention that the product feels verbose. Little backstories, verbose expositions, and monster stats are all a little wordy. For example “These chaotic evil creature’s vital stats are: ( creatures stats.) There is also a lot of advice for the DM scattered throughout the text on how to run a room or so on. A good example is the little bit of advice I mentioned above about trying to make this adventure seem like a short little side-trek while they are on their way somewhere else. All of that tends to contribute to a certain feeling that this is meant to be a kind of introductory module, even though it’s for levels 6-8. This is my first experience with a C&C product though, so perhaps all of their modules are like. I’m not a fan for verbosity in text as I tend to think it detracts from a DM’s ability to run a room on the fly. It’s forces you to read instead of skim and I much prefer the ‘glance at the notes’ style of DM play. There is a good chance though that I am wrong in my feeling that this thing is ACTUALLY verbose. I opened the book at random and that page had 12 rooms described on it while the facing page has 9, both in easy to read text. That would be impossible if the product was as verbose as I seem to think it is. Maybe the author is just REALLY good. I have no idea; I can’t explain the disparity.

The module is named for the Chimera’s Roost, a local peak that the dungeon lies beneath. It does indeed house a chimera. It gets almost three-quarters of a page in description and is a really nice realistic encounter. The chimera lives on top on a cliff pinnacle, and has a nest up there. It’s difficult to reach, but that’s where the creature will retreat to if injured and that’s where the real treasure is located: it’s eggs. The cliff floor is surrounded by the debris from where the chimera feeds, and is scattered with bones and treasure that the party can pick up prettily easily. Of course, if they come in to this zone then the chimera is going to swoop down and attack until it’s so injured it retreats back to its nest. I found the setup, treasure, and creature behavior and environment excellent. It seemed to be a very good portrayal of how this creature might behave and feed and react to the party. It also contains a nice element of the OSR: get the loot you can easily and don’t worry about slaughtering the monster. Of course, there’s another OSR lesson here also: the really good loot is non-obvious. IE: the eggs. This is a pretty lengthy spoiler-filled example of the first major encounter, however it gives a good indication of how the rest of the encounters feel. There’s an element of naturalism to all of them, while still retaining the core old school values.

The dungeon proper is contained on four levels, The first three have about 24 keyed rooms each while the fourth has eleven. The maps here are excellent for levels of such small size, at least for two of the larger levels. There are lots of loops and alternate paths on the paths, so there’s lots of decisions the party will have to make in their exploration, and lots of ability for the characters to take alternate paths should the need arise. I love this sort of map, it really forces the pC’s to make hard decisions about potentially leaving encounters behind them, but also allows for them to run away or explore is non-obvious ways. In addition, a couple of maps have some pretty excellent level transitions. By this I mean that there are multiple way to get from one level to the next, or even potentially skip a level. This is an element that is rarely seen in most products, probably because of the tendency to publish smaller lair dungeons instead of true mega-dungeons. Barrier Peaks did this, as several of the more excellent Judges Guild products. I love seeing it and wish more publishers published these styles of dungeons.

I’m not going to go in to too much detail on the dungeons proper because I don’t want to spoil things. There are good number of environmental hazards in the dungeon. I like these because of the diversity they add to a crawl and the naturalism they bring to it as well. There are a smattering of traps but not quite a s many as I would have expected. Then again, this place is occupied again so it doesn’t make too much sense to have traps laying around. There are a number of strange things laying about for the party to mess around with. AGain, not too many and they all fit in really well. None of them really fall in to the weird category though, which is unfortunate; I really enjoy the weird. Each of the levels has it’s own distinct flavor and there are several factions within the dungeon. Not all combat encounters need to lead to a fight, even within an enemy faction, which is a very good thing. The treasures placed appear to follow the OSR model: not everyone has significant treasure, a few creatures DO have significant treasure, some treasure is unguarded, and quite a bit is non-traditional and/or hard to recover, for various reasons. This is important: in games where gold=xp then the goal of the game is usually risk avoidance until you can get at the sweet sweet gold. This product does a very good job at that. Only one of the levels has a wandering monsters table, the most occupied one, although there are occasional notes about how the inhabitants will react to noises nearby. The wanderers do have nice motivations attached: drunk, salves with probabilities to run/fight/negotiate, etc. Those are the sorts of tables I like to see in an adventure; it gives a feeling that the place has a history and life outside of the PC’s little hack n slash visit.