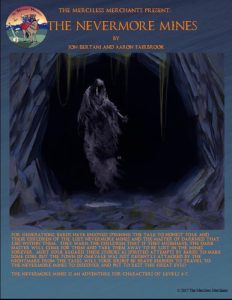 For generations, bards have enjoyed spinning the tale to honest folk and their children of the lost Nevermore Mines and the Master of Darkness that lies within them. They warn the children that if they misbehave, the Dark Master will come for them and take them away to be lost in the Mines forever. Most folk regard these stories as spirited attempts by bards to make some coin, but the town of Oakvale was just recently attacked by the nightmare from the tales. Will your group be brave enough to travel to the Nevermore Mines to discover and put to rest this great evil?

This 56 page adventure describes a two-level mine now being used as a lair by a devil, along with the wilderness environs around the lair. It’s a pretty classic environment, with an encounter mix that is a cut above the usual dreck. It’s also a classic “highlighter adventure”, being absolutely clogged with text. It’s clear a lot of effort went in to this, and unfortunate that its usability is hampered.

A devil possessed a miner long ago and is now trapped in the mine; warded from leaving. He’s accumulated some followers. There are a small selection of hooks to get the party in to the mine, most of which are the usual boring stuff. Our children are missing. Hired to go find something, and so on. But there’s also … you won the deed in a poker game! This, and the associated “found the deed” and “were granted the deed as a reward” are great examples of appealing to the players. “Well, I got this deed to a gold mine …” That’s the kind of very personal appeal to a player that I think makes a good adventure hook.

The wilderness area leading to the mine is about five miles long, with a couple of paths leading off of the main trail, and ten encounter areas scattered through the side trails. This is supported by a small wandering monster table that … is a little fun! An etting having an internal monologue that does not immediately attack, hobgoblins that don’t attack immediately … it’s amazing! A variety of encounter types from mundane, to mysterious, to social, to the usual monster attack. The variety is refreshing to see. Similarly, the wilderness encounters proper have a decent mix of variety to them. Several simple barrows to explore, an abandoned hut, a nice rock bridge to a werewolf lair, “the slime cave” (with weird mushrooms!) and a bog, complete with ghost children carving weird pumpkins to scare off the evil one and light the way for their parents to find them. Again, several non-violent encounters or encounters that let the party get themselves in to trouble (grave robbing the high priest? Ought oh …) The variety and mix is great, as well as the fact that there’s an actual REAL wilderness area offered .. even if it is a little simple, being paths through the mountains.

The main encounter location is a two-level mine with about twenty five rooms in total. The vibe inside is that of … surprise! a mine that has a devil inside! There’s a mix of natural type things (spiders, mine workings) with devil-like things such as heads hanging on hooks and so on. Generally each room has one encounter in it, and there’s some direction on how to respond to incursions … so more of a lair dungeon than an exploratory dungeon. That would usually mean that it skews heavily toward “this room has a guard monster that attacks you” but this adventure throws in a decent amount of encounters that don’t just feel like a slog. There are captives to rescue, dead children to find, a ghostly prisoner to “make friends with” … which is a banshee! It’s a nice little devil lair with a bunch of fucked-up monsters, not all of who like each other.

The primary sin is verbosity. The adventure confuses a long descriptions with a good description. Every single room/encounter gets two or three paragraphs of text. The text is a combination of fact based descriptions and history, neither of which I’m particularly fond of. The history is, generally, not needed in adventures and serves to only pad the adventure word count. Which makes it harder to find the information that you actually DO need to run the adventure. The “fact based description” ding sounds weird, I know. While not the worst, I think these sorts of fact-based descriptions come off, at best, flat and at worst trend to the “useless detail” end of the spectrum … which once again ends up clogging things up. The flatness comes from a communication style that is attempting to communicate too much. The designer needs to communicate a vibe, or feeling, to the DM, letting them fill in the rest. There’s a very long paragraph in one of the rooms of the slime caves. “A large hole in the ceiling on the east side of the chamber opens into the open sky above and light from the moon or sun is able to shine through the room.” I think we all get what the intent is. The designer clearly has a picture in their head and is trying to get that out to the DM. And yet “God rays stream in from a hole in the ceiling.” 10 words instead of 33 and, I think, a much better visual built up for the DM. I know it seems minor, but that first long paragraph has eight long sentences in it and it would be a BEAST to go through during play. Short. Punchy/Evocative. The last paragraph, of the same room, reads: “ Anyone entering the bubbling mud bath will find it very warm and comfortable. The basin is approximately four feet deep and three human sized characters can fit in it at once. Anyone spending an hour or more in the mud bath will heal twice the amount from their next resting for a full day.” Again, this could be shortened considerably, getting rid of useless wording and still delivering the intent, less prescriptively, in a more evocative manner.

The barrow mounds are good example. One of them has four of five “empty” rooms, all of which get relatively lengthy descriptions, about sixty words, to describe chambers that have nothing much going on in them. They are, at best, window dressing. A short, punchy description, would have communicated more for less and be easier to run during play.

There’s also this tendency to elaborate on the “why” of things. Backstory for monsters, usually. Tickles the evil clown (yes, I know. It’s ok, the entire adventure isn’t like that. A better word than “clown” should have been used.) has this buried in his backstory: “However, due to the Master’s experiments, Tickles can now regenerate like a troll and has special abilities.” You don’t need to explain WHY a monster can regen, unless you’re doing some kind of mythic thing. In fact, we probably don’t need Tickles backstory at all. He’s unlikely to engage in conversation the way the ghost children in the bog are (who DO talk to the party, and thus a little more can be justified.) Again, all of this is towards the singular end of making the room descriptions, the text the DM has to wade through to run the game at the table, useful AT THE TABLE. Hunting for information is a pain. Hence … a classic highlighter adventure. Flawed, but a highlighter helps a bit. If you have to use a highlighter then things could be better.

There are a few other nits as well. There are a few magic items worth paying attention to, but most are just book magic items or treasure with no attempt to make most of them more interesting. That’s too bad, because the ones that ARE new are pretty interesting. The maps are weird. A bright blue background was chosen for a couple of them, which seems really weird and I find distracting. But, there’s also some attempt to include more interesting detail on a few, like the slime cave. That map shows a nice blue river running through the cave and tries to communicate some information with more detail on the map. The whole thing is jammed with art .. of varying usefulness. Sometimes I like a good monster art piece, or room art piece, because they can communicate a vibe well. This one is hit and well. The pumpkin man comes across well, as a monster, as does the slime cave entrance on the same page. Quite a few of the others work less well. They come across as “generic imp” or “generic gargoyle.”

This is a decent little adventure that’s going to take a decent amount of highlighter work, and DM visualization and notes, to make work to the degree I expect.

You can find this on DriveThru. The last page of the preview shows a description for wilderness area #1. That’s a decent enough example of both good art (the standing stone picture does a good job communicating the vibe) and the verbose/fact-based descriptions. https://www.drivethrurpg.com/product/206540/The-Nevermore-Mines?affiliate_id=1892600

5 Responses to The Nevermore Mines