The Curse of Harken Hall 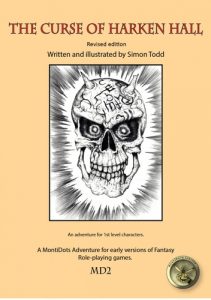 Clovis Harken, Lord of Highcliff Gard has but six months to live, at least if the family curse is anything to go by. His wife, Karlina is going frantic as he has forbidden any from investigating the curse. But he has gone on a hunting trip, and Karlina has sent word to the wayside Inn asking for investigators to explore a mysterious door hidden behind a mural in the oldest part of the manor. It’s easy money if it were but a simple coal store….

This thirty five page adventure details the dungeon behind a newly found secret door in the manor of a cursed lord. With twenty-one rooms over thirteen pages, the rooms are … expansivly encountered, with each rooms many features generally ALL having some sort of thing associated with them. It could use a hard organization overhaul to deal effectively with the organizational consequences of that dense content. It can also be a little bland in its treatment of treasure and goes overboard with DM advice and mixes setting data in through a repetition I found tedious. This adventure feels like … I don’t know. It feels like a good old-school basement adventure in which each room has a lot of stuff going on.

Every lord of the manor dies at forty, because of some curse you hear about from a bard. A summons to the manor from the lady reveals her husband is out hunting and will return in six hours. She wants you to explore a new secret door she found, thinking it may contain information on lifting the family curse. The house guards are loyal to her husband, who doesn’t want anyone poking around with the curse.

I described the rooms in the dungeon as expansive, or perhaps dense is a better word. The first room has maybe six different things going on. There are spiders in the ceiling joists, with big wiggling food sacks hanging. There’s a chest and a mound of burlap. There are banners under a sheet, and 7’ tall statue, along with a table and a rubbish/slurry pile near a locked door with an obvious key missing from the keyring next to the door. Don’t go poking in the rafters and the spiders keep to themselves, you may not even see them. Fuck with their food sacks and rats run out of the walls to investigate. The wet burlap has rats in it. The missing key is in the rubble at the foot of the door, along with some giant centipedes. And on and on it goes, to the tune of a page and a half. The writing is not exemplar in its use of terse & evocative language, but it’s not exactly full of garbage irrelevent history and backstory either. Well. Usually. It IS more verbose than I would prefer in places. “Inform the player that the spells are instantly readable by a magic user” is the advice when you find some scrolls in a chest. Or “A cleric, magic user or druid is able to identify the dried herbs as St. John’s Wort, a plant used as a ward against fae that can also be used as a bug repellent if burnt.” In the table description there’s “On the table are gauntlets and a battle axe with a leather cover.” and then “the battle axe is serviceable.” This sort of thing happens again and again. I’m not sure I would make the choices to include this information … but it’s also pretty hard to damn the product for it. Well, but for …

The density of the rooms, combined with the organizational style, makes the extraneous data stick out more than usual. There’s just SO MUCH that you start looking for ways to manage your way through it. More than the detail I think this is an impact of the style. The rooms almost always start off with a read-aloud. In the case of room one it’s two paragraphs long. It’s pretty fact based, which I generally rail against, but it also touches on nearly every thing in the room to investigate. If you believe that the DM should feed “follow up” hints to party, for them to inquire further about, then this is the read aloud for you! Here’s the read-aloud section for the spiders and cocoons: “The rafters, 10 feet above your head, are coated in cobwebs. There
are seven cocoons about two feet long at intervals dangling from the ceiling. They twitch erratically.” Other read-aloud bits mention the table, statue, sheet covering something, the doors, and so on. Actually, the cocoon read-aloud is not bad for evocative imagery, but the rest IS pretty fact based. The various sections are then bolded out in the text. IE: “The Table” is a bolded section heading, as is “The Banners” and “The Chest and Mound of Burlap” and “The Statue” and “The South Wall.” Note the disconnect between the section headings and the read-aloud. Banners? No banners mentioned in the read-aloud. They are under a sheet that IS mentioned. The South wall? That’s the door on the south wall. Then there’s an entire section of text after the read-aloud and before the first section heading which describe a pool of seeping water, a stairway, the wall symbols the walls are painted with, the cocoons and spiders. Then the monsters are bolded in the various section, in a slightly larger font. It really needs slightly better organization. Consistency in the section headings, the monsters maybe indented instead of bolding with larger font, and the section heading being consistent. I recall another product I just reviewed that had a kind of bullet point layout. That format, I think, would have worked wonders to help group and call out the content in this dungeon. None of which means it’s BAD, just that it could be better.

The whole thing FEELS like a classic dungeoncrawl, even if the map is really just a couple of rings of corridors/rooms. The content of the rooms leads to this exploratory vive that’s going on. You can interact with stuff. Search the garbage for a key. Peel back peeling paint to find a door. Fuck with the statue. It’s quite interactive and some rooms, like the first room, are bursting with interactivity. More than anything else it feels like those old 1e DMG example dungeon rooms, with the holes filled with wood, the trapdoor, and the stream with a skeleton and scroll case in it.

Loves of B2 will rejoice knowing that the manor gets a small write up also … along with its considerable treasure and magic items contents. Murder Hobos, Represent! The adventure does get a little heavy in places, especially prior to the dungeon proper, with setting data. It tells you about 200 times that demi-humans and humanoids are called Erle Folk, clerics are multi-religion, and MU’s can brew potions. Maybe it’s the repetition, but the setting info felt a little too much, even though it does have a kind of interesting Ars Magica/Harn-ish vibe to it. More fantasy than those two settings but still skewing more in that direction than most adventures do. The treasure is generally pretty good. The magic items skew towards the book variety but they do have some decent details, like a +1 dagger with an ivory handle with inlay in the form of a sinister faun. (Which fits in to the “alien fae” theming as well.)

The exploratory nature of the dungeon as well as the variety in non-standard encounters (floating skulls shooting magic missile! Trapped fae spirit!) makes this one of those rare cases where I think it’s worth pulling out the highlighter. My impossibly high standards do a disservice to these journeyman works. One day I should collect them all on a second page. In any event, this is good enough to make me want to see more from the publisher/designer. Expect to see some more in the near future.

You can find this on DriveThru, but we warned the preview is pretty useless in determining what’s up with the actual useful content. (Ha! A new area for me to bitch about! “The preview doesn’t show a useful page.”)https://www.drivethrurpg.com/product/192981/The-Curse-of-Harken-Hall?affiliate_id=1892600