The Beast That Waits 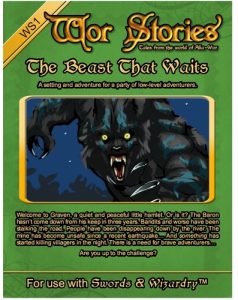 Welcome to Graven, a quiet and peaceful little hamlet. Or is it? The Baron hasn’t come down from his keep in three years. Bandits and worse have been stalking the road. People have been disappearing down by the river. The mine has become unsafe since a recent earthquake… And something has started killing villagers in the night. There is a need for brave adventurers…

This is a 52 page region in trouble with various little things to do scattered throughout, and interconnected. It’s not really enough to call it a regional sandbox; more of a description of the lands around a village. It needs a little more ‘going on’ for the DM to throw in and suffers from a word count issue … but mostly because the sheer size of the product. IE: It’s more of a usability issue than a wall of text issue. It’s ALMOST where it needs to be to be a good product.

The “adventure” is really just a description of various locales around a village. The village proper is described, along with a dungeon and a barons keep and three or four wilderness regions. Supporting this is an appendix with a name generator, rumors, bestiary, and a couple of pages that offer solutions to the various more open-ended mysteries found in the village … larger mysteries than the ones explored in the adventure proper.

The wilderness sections are presented in about two pages each. A short paragraph overview and then a couple of wandering tables. There are no “set” encounters in the wilderness areas; everything is on the wandering table, which is an interesting idea I can kind of groove on, given the minor significance of the the locales on the table. The wandering tables are generally something like: “If you’re in the road in the forest”, with day & night options, and then also “if you strike out off the road in the forest”, with day and night tables. This is followed, mostly, by the stats of the creatures encountered, with little no extra context text. EXCEPT when there is. And then it goes on a paragraph. These are generally NPC encounters or some kind of encounter related to the various little things going on. “The Red Lady” in the woods is a ghost, with a little data on her (mostly things important to the game at the table!) At the end there’s a little section on “Clearing” the region. If you do certain things then the region becomes safer, here’s an XP bonus, and here’s how the impact on the regional/village. It’s a nice touch. It’s also the case that clearing a region generally requires some exploration of one of the OTHER regions. IE: the ghosts body is somewhere else. These little things are the primary points of the adventure. Hmmm, no, that didn’t come out well. Each one of those little things (a few per region, maybe six regions total) end up as a kind of To Do list for the adventurers, and that To Do is the primary adventure in this product. Arg! I still don’t think I said that well. I’ll table it. More on that point later.

The three major non-wilderness areas are the village proper, the old mines, and the barons keep. The later are both primary adventure locales, with above average maps (but not exploratory-dungeon type maps) having some elevation changes and other non-generic features. The keep is full of bandits … and maybe a werewolf, while the mines have gnolls and undead. There can be some social interaction in both areas, and MAYBE even some allies/faction play a bit with some evil folk. There’s not a lot, really only a couple of words for two people, if memory serves me right, but it’s there. While I’m on the social, let me say that this play is CRAWLING with potential hirelings. The village, the wilderness areas, and the keep … you could have a small army of followers. That’s a nice non-traditional resource and/or reward for the players, and goes a long way to showing that their actions have an actual impact.

I feel like I could write about two dozen pages more on this adventure, both positively and negatively. The villagers refer to the primary monster as “The Beast that waits” (although I’d shorten it the the beast), which is much better than “a couple of trolls been giving up trouble.” The brigands are part of a gang, with a name. There are tips about things the party will want, like silver weapons. The villagers, like the little adventures, have a few interconnections to other villagers. The “boss fight” in the mines is fucking ROUGH! The treasure is abstracted in some places and the magic items boring book shit. The imagery is sometimes useful (in the mines in particular) and mostly not. There needs to be some quick villager quirks/events to liven things up and get them going. I think though, I’m going to expand on only two more issues, both negative.

First, the adventure is a little … oh, I’ll say verbose. The issue is that the NPC’s all have personalities, goals, and descriptions, over a couple of paragraphs each, and they are all at the locations they are usually found at. I think this is a cumbersome way to present information FOR ACTUAL PLAY. Either keep the current descriptions and provide a 1-page summary of all of the NPC’s (“Farmer Ted: Short, limp. Hates his father. Loves his mother like norman bates. Location C16”) OR reworks the descriptions in to something that MUCH easier to scan during play. I don’t mind a paragraph or two for an NPC (when it’s full of gameable data) but I HAVE to have something to use at the table, and text paragraphs of NPC’s don’t fit the bill. That means a highlighter, at best. And Fuck You, how about you, the designer, highlight for me since I’m paying you? Hmmm, that came off a little strong for the degree of sin, but, the point remains.

Second, there is a REAL lack of motivation for the party. To be fair, the designer points this out as being key. The party MUST be engaged in the village. But the hooks provided (the most mundane of hooks at that) just get the party TO the village. Why they would want to get involved in ANYTHING is not covered at all. “Because”, I guess? This lack of motivation (other than the usual do-gooding …) Makes things rough. You could strike up a love interest, I guess. But what’s really missing is what the designer correctly points out in the notes in the appendix: why the fuck does the party care? There’s nothing present in the adventure to help on that one crucial point. Marrying them to the locations, literally, or perhaps figuratively, would be what’s needed. Maybe the king appoints the lands to THEM, or they are rightful heir, or some such. That would give them a reason to clean up this one horse region.

This is a decent little regional area and reminds me of Scourge of the Demon Wolf … except without the motivation events that Demon Wolf had. I was not expecting much and was pleasantly surprised with what I ended up with. A second edition, solving the problems, or perhaps two pages of free errata/expansion, would serve this product quite well. A few more events, a few more colorful villagers, a reference sheet of NPC’s, some better mundane & magical treasure, a reason for the season … this could be a great little product.

This is on drivethru. Check out the last page of the preview for a look at the wilderness format. https://www.drivethrurpg.com/product/134360/The-Beast-That-Waits–Swords-and-Wizardry-Edition?affiliate_id=1892600

2 Responses to The Beast That Waits