The Drow Undercity of Death 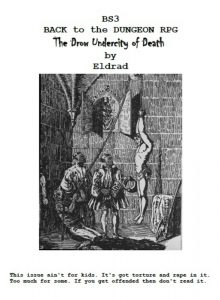 By Eldrad
Self-Published
Back to the Dungeon RPG

Labeled “mature”, this third installment of the Black Stairs megadungeon comes in at 28 pages for 128(!) rooms. It’s an art project, or madness, or some combination of the two that produces something greater than the whole. Linear. Minimally keyed. It relies more on concepts than anything else. And that works. Sometimes. There’s something charming about the high concept rooms mixed together to form this very classic feeling dungeon environment. Until you reach the drow city. Then it falls apart.

Thirs is the third installment in this series, and I’ve GOT to stop coming in during the middle of these series. “The Black Stairs” sounds familiar, but I don’t think I’ve reviewed either the first or second level. Anyway, this is all single column with a stark typeface and a writing style I KNOW I’ve seen before.

The adventure has some great room ideas. Ideas are presented starkly and left to the DM. One line from room six reads “The hallway ends with a Stone Face with Huge Jasper Jeweled Eyes worth …” and then the pit trap when the face is touched. A different room presents “A gigantic ruined gate blocks off the other side of the cavern. Glowing lichens on the ceiling above give a dim eerie light. It’s architecture and style is unknown and it is VERY OLD.” and then goes on detail two columns full of rats nests. All three of those are great brief concepts for things to build a room around. And everything is left for the DM, for better or worse. “The door is ornate and evil looking.” Well … ok. I would normally make a “show, don’t tell” statement about that. It’s all very stark and there’s something VERY charming about the randomness of finding a gate with glowing lichen in the middle of a cave room, deep underground. It FEELS mysterious and wondrous, because there is so much for the mind to fill in.

I can deal with the minimalism, for the most part, because of the high hit rate on concepts. But then it breaks down. Bad. The drow city, once reached through the caves (the city is about 35 rooms, I’d guess) is full on D3 mode. House Demon has 10 male drow and 13 female drow and a female drow cleric leading them. [treasure list] The iconic rooms stop and it devolves in to just facts without charm.

The treasure is quite weird. Long lists that look randomly rolled that go on forever. “… Statuette-10 gp, Necklace-300 gp, Anklet-50 gp, Ring-200 gp, Orb-1800 gp, Bracelet-40 gp, Brooch-900 gp, Chain-300 gp …” That’s about 10% of the treasure in one room listing. Generic and nonsensical. But then, early on, you get a Ring of Three Wishes, with details on recharging it and who wants it and complications and so on. It’s great!

And then there’s the map. While there are holes with ropes and different ways up and down on the maps to create a decently diverse dimensionality, they are, essentially, linear. Leave one room, go down a short hall, enter another room. The maps, handdrawn, are also quite difficult to read at times. I’m looking at you keys 2&3 and 9&10 on map 3a! Further, sometimes the numbers don’t actually appear in rooms. This is an issue in “corridor mazes” when you’re trying to figure out just what is a passage and what is a wall.

This is a stark vision. When it’s good then it’s terse and wonderful. And when it’s bad it’s very bad. In one product you can find both the best and the worst aspects of minimal design. I would steal like a mofo from it and stick it in to a better map.

1 Response to The Drow Undercity of Death