Escape from the Astral Spellhold 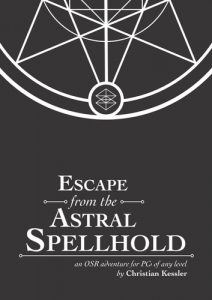 You know what “Any Level” means, don’t you? PUZZLES! Well … kind of.

This twenty page digest adventure describes a small wizard’s tower with about nine rooms in it, in pointcrawl style, along with a couple of pages about a city you could locate it in. It does a decent job of describing a freaky wizard tower, although treasure is a little light.

This reminds me of Korgoth of Barbaria. The wizard is out of town, the party finds out and decides to raid his tower for loot. Or maybe, for the higher level party, they try to kill him. In both hooks the rooms are written in a way that combat is not INSTANT and is rather dependent on how far the party pushes their luck … for certain definitions of that phrase.

The room descriptions are, mechanically, an interesting choice. Each key element of the room is bolded and has its own paragraph. Functionally, this gives you a quick way to get the high-level objects in the room called out easily for you, the DM, and then the couple of extra sentences (the “paragraph” I mentioned) provides the details on those. The lab has 4 mannikins, an alchemy workbench, a tinkering workbench, and a dissection table. A couple f extra sentences describe each. For the dissection table it’s: “A thin white sheet covers an inert flesh golem with the top of its skull removed. There is a steel skullplate next to the body, and a pair of copper wires sticking out of the base of its skull and connecting it to a box with a (broken) switch on the wall.” It’s an interesting way to communicate the room and works fairly well. I think it breaks down a bit in that its very fact based descriptions rather than evocative impressions. Both can work well to create scenes in the DM’s head, but more descriptive words/less fact-based (grammar school noun/verb?) does a better job, IMO.

The actual contents of the rooms gives the party something to play with or talk to in almost every case. They are, true to description, pretty level-neutral. A couple of the puzzles rely on some external (player) knowledge (a knight chess puzzle, for example) but in general they are a nice combination of pretext and a difficulty that is enough to give a sense of accomplishment without being maddening. Also, there’s a built in clue system in the library where the book ladder can answer questions by directing folks to passages in certain volumes. It’s always a good thing when interesting play in the dungeon can lead to discovers and problem-solving in the dungeon.

Eventually the wizard returns. This is, I think, a problem. Or may be, anyway. There’s an escalation die mechanic (a great mechanic! And great use here!) that determines when the wizard returns. Every turn the die is rolled. It turns out the party is trapped in the tower and most of the tower needs to be explored (and a puzzle solved, I believe) in order to find the way out. Further, a major (only?) clue is in a room with a dragon that has a 25% chance of waking up every turn. Now, both the wizard and the dragon have a reaction table, so party destruction is not guaranteed, but it is pretty likely, to the point of “almost certain.” This is the weirdest part of the adventure. While most of the adventure is, in fact, pretty level neutra, the exit and/or wizard return are almost certain combats with very powerful opponents. Running would not be an option since the party is trapped in the tower. These two parts need a reworking, as well, perhaps, as some allusion to the wizard returning, which I don’t believe is ever socialized with the party. Treasure is also quite light, with only a few objects to loot. A few more integrated objects, such as perhaps making the vivisection table skull bolts platinum or some such, would have brought out that murder-hobo “unbolt it and take it” propensity.

These adventures are the most heartbreaking for me. This adventure does not suck. It is not bad. This is a decent adventure. It’s just not a great adventure. What’s holding it back is, mostly, the language and vividness of the scenes it paints. A reworking of the text would push it over the top. These sorts of journeyman works get a deal from my reviews. If all adventures were as good as this one then I wouldn’t be writing reviews.

6 Responses to Escape from the Astral Spellhold